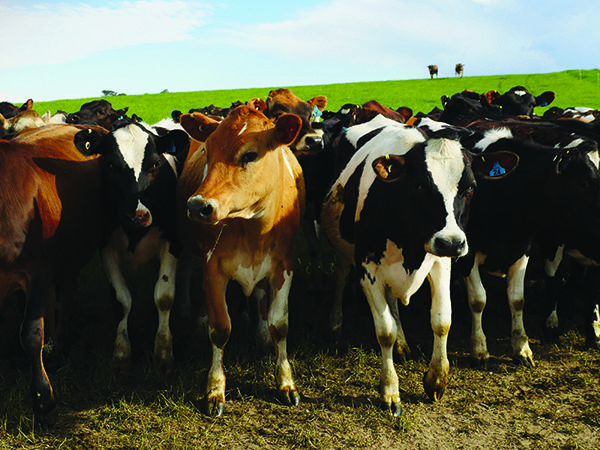 Tube feeding done the right way can be lifesaving; done the wrong way and it can be the opposite. Vet and dairy farmer Nicola Neal from The Aspiring Calf Company says that while it can be daunting for someone new to calf rearing, every calf rearer must be able to carry out the technique.

There are two situations where it’s vital: when a newborn calf is unlikely to get enough high-quality colostrum in the first six to 12 hours, and when a calf is unwell and can’t or won’t drink enough of its own accord.

“We know in New Zealand about a third of calves, under normal circumstances, won’t have had enough colostrum from their mothers – it’s possibly more than that but not less.

“Most often the person picking up the calves won’t be the person feeding them so it’s unlikely anyone is going to know for sure if the calf has had a good drink from mum.”

Nicola says New Zealand research has found a calf’s willingness or unwillingness to drink from a feeder or suckle on a finger is a poor indicator of whether it’s been fed by its mother. A 40kg calf will need 4-6 litres of high-quality colostrum in the first 12 hours. It’s preferable to spend a little time trying to get a reluctant newborn to feed from a feeder because the suckling action activates the closure of the oesophageal groove and ensures the colostrum and antibodies go directly to the abomasum (the last of a bovine’s four stomachs) where there is greatest absorption of the antibodies.

However, studies have shown that tube feeding the newborn and delivering the colostrum directly to the fore-stomachs will result in the colostrum flowing through to the abomasum, albeit at a slightly slower rate.

“When people are designing their calf rearing systems and thinking about staffing, allowing enough resources for spending time on training new calves should be a factor.

“Some people don’t want to tube feed at all because they say it makes it harder to get the calf to feed off the feeder in the next few feeds.

“But if you’re running out of time it’s more important to get the colostrum into them.

“We know the outcomes for calves that don’t get enough colostrum quickly enough are very, very poor in terms of illness and survival.”

“Once you know you’ve delivered that dose of antibodies and it’s had 4-6l in 12 hours since birth you can leave it a little longer at the other end to drive the motivation to learn.

“You can’t do that at the start because they may not have had anything to eat at all.

“When you’re training them onto the feeder make sure it’s a pleasant experience for them, stay calm and take five if you find you’re fighting each other.”

The same advice goes for those tube feeding – it’s imperative the rearer is
calm and the animal is calm and well restrained.

A purpose-made calf stomach tube feeder will have a bottle or bag at one end for the colostrum or liquid.

A rigid tube feeding system will have a rubber section on it allowing the tubing to be bent over so it’s clamped shut.

At the end of the tubing, which is about 50-60cm long, there will be a small smooth bulb with an opening for the colostrum or liquid to flow through to the calf.

All of this equipment must be pristinely clean and the tubing must be smooth and undamaged so it won’t scratch the soft inside of the calf’s oesophagus.

“This is a critical thing to get right – for both calf and operator safety.

“If the calf kicks you, or you’re fighting each other, step away, take five, and have another go when you are both calmed down.”

Back the calf in so its bottom is into the corner of the pen.

Straddle it so your knees are on either side of its head and gently but firmly hold it there with your legs.

“This means it can breathe freely and you have two hands to carry out the tubing.

“Some calves may be weak and not want to stand but you must make sure the calf’s head is above its stomach or you will risk the liquid running into the windpipe and drowning the calf.

“For a weak calf, try and get it into a sitting dog type position.

“When things go wrong it’s often because the calf isn’t well restrained and suddenly kicks out or moves backwards and the rearer panics and pulls the tube out while the liquid is still going in.”

“You must make sure the tube is clamped off before you begin inserting the tube.

“That’s vital because any liquid coming out as the tube goes down could end up going down the windpipe and drown the calf.

“Use one hand to support the calf’s jaw and the other to hold the tube.”

Make sure the calf’s nose is below its ears – you don’t want its nose pointing up to the sky because this makes it harder to insert the tube.

“Introduce the tube into the calf’s mouth and gently move it into the back of the mouth over the tongue and you’ll feel a little resistance and then it should start swallowing and taking the tube down into the oesophagus.

“Make sure the tubing is clamped off still and slide your left hand down onto the left-hand side of the neck to feel for the bulb at the end of the tube passing down the oesophagus to the stomach.

“If the tube is in the oesophagus you will feel it, if it’s in the windpipe you won’t be able to feel it.

“If you’re unsure, slide the tube up a little and if you still can’t feel it, or are in any doubt at all, carefully take it out and start again – making sure the tube is still clamped off the whole time.”

Once you are sure you can feel it on the left side of the calf’s neck and the tube is inserted well in you can release the clamp and let the liquid – colostrum or electrolyte – flow quickly in.

“The calf might make some weird noises. That’s normal, but make sure they’re still well restrained and you don’t have your hand near their nose so they can breathe freely.”

Once all of the fluid has gone out of the bottle clamp off the tube and gently withdraw the tube.

“It’s always a good feeling to know they’ve definitely had those antibodies and in the case of sick calves to know you’ve got what they need into them.” 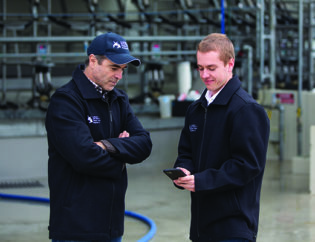