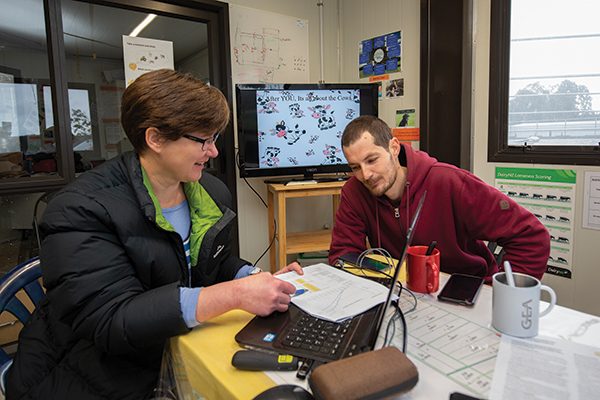 Canterbury dairy farmer Theona Blom has built effective teams through communication, leadership skills and a personality test. Anne Lee paid her and husband Johan a visit to find out more.

Theona and her husband Johan are contract milkers on Southern Pastures’ 900-cow Kowhai Farm near Hororata.

Creating happy, effective teams by building communication and leadership skills is something Theona has been focused on for several years.

Originally from South Africa, she was an accountant and Johan a scientist working with farmers for a government agricultural department.

The pair came to New Zealand 14 years ago with Johan initially working as a dairy assistant at Tokoroa before moving up the ranks to herd manager and then farm manager in Cambridge and then on to where the couple were 50/50 sharemilking 200 then 270 cows.

In 2015 they were Central Plateau Sharefarmers of the Year and five years ago they became NZ citizens.

“When things go wrong – and let’s face it, they do – the important thing is not what’s happened but how you react, how you deal with it.”

About then, they started looking to the South Island for further opportunities to grow.

The move to Kowhai Farm gave them that with what was initially a 750-cow, contract milking job, now 900 cows thanks to a 60-bail rotary farm dairy replacing the 40-aside herringbone the season after they arrived.

With a larger herd comes the need for a bigger team and the need to have the team working effectively together.

“More than that, you also want it to be an enjoyable place to work – where people get along with each other, have a bit of fun and can be learning and growing along the way,” Theona says.

She’s availed herself of the tools and resources offered by DairyNZ and admits she’s fascinated by the people side of the business and understanding what makes people tick.

In particular she’s enjoyed helping people learn more about themselves, their personalities and communication styles as well as fostering leadership.

When people join the team, Theona invites them to take the DOPE bird personality test.

It stands for dove, owl, peacock and eagle and helps give an insight into personality types not just for the person taking the test but also for other members in the team.

“Sometimes, at first, they might be – nah, I’m not really into that – but everyone has found it helpful.

“I sit down with them and explain the results and it can be quite an eye opener for them – to get a bit more understanding of themselves.

“It gives an idea of their characteristics and shows them their strengths as well as pointing out areas they could work on but it also helps them get rid of that sense of blaming themselves people sometimes have.

“They can see the things they might see as weaknesses are simply characteristics, they’re not right or wrong and there are ways to work on them.”

They can also see those characteristics can be strengths too if they view them with a different mindset.

Doves, for instance, might feel they get overlooked and lack confidence but through the test they see it’s in their natural personality to be quieter and that their ideas are still valuable so working on confidence and assertiveness will be beneficial.

Johan and Theona’s 2IC Johan Scheepers (Skippy) joined their team four years ago as a dairy farm assistant, coming directly from South Africa to the job.

He’s an eagle, based on the test, and says understanding his own traits and those of his team mates has made a huge difference.

Theona’s interest in the people side of the business saw her join DairyNZ’s new workplace design project which is looking at how to create great workplaces for 2030 and as part of that she and other farmers suggested that leadership training for staff, not yet in leadership roles, would be a big bonus for the sector.

She suggested the resulting pilot course to Johan and both the Bloms and Johan say it has been transformational.

“Having the understanding of personality types put together with the leadership course – well it’s life changing really,” Johan says.

“The first time I did the personality test I didn’t really think it was for me, but as I learnt more it started growing on me and I had to admit she (Theona) was onto something.

“Then, when I started the course and we started learning more about operating above and below the line, about our reactions and being self-aware as part of the emotional intelligence part of the course, a lot of things really made sense.

“We had two hour Zoom meetings and had small break out groups on Zoom too so we could talk about situations we had going on in real life.

They also had one on one sessions with leadership coach Sha Perera so they could get good practical advice and work out how to put the theory into practice.

As well as understanding more about themselves the course also helped participants learn about others and being aware of their emotions and reactions and how to manage a situation.

“I’ll admit it, I could be pretty quick to fire up and the way I deal with things now is quite different.

“When things go wrong – and let’s face it they do – the important thing is not what’s happened but how you react, how you deal with it.

“Instead of exploding, it’s about taking that moment to stop, maybe even walk away, think it through and then come back and have the conversation.”

He’s also learned how different people are and that just because someone has a personality where they don’t speak up much that doesn’t mean they have nothing valuable to say.
Doves really aren’t going to react well to an abrupt, shouty manager, he says.

“All of this – the course and the personality testing – it’s not just for work – these skills are for life, for every aspect of your life,” he says.

When he contemplates what he’s learned and how that’s changed his mindset and how he reacts he agrees there’s a bit more dove and owl in the eagle now.

The long reach of these leadership and communication skills shouldn’t be underestimated, Theona says.

Good leadership and the ability to create an effective team environment not only makes for a pleasant day, it gets results.

“We share a lot of information with our team and have goals for each season.

“Our reproduction results for instance are something we’re proud of because we’re making good progress and that’s thanks to the team and their attention to detail.”

Over the past three years the six-week in-calf rate has gone from 66% to 75% and the empty rate is down all while shortening the mating period and significantly cutting back on treating anoestrus cows.

They use Whatsapp – a phone communication app – and have a group for the whole farm so everyone can see what’s being communicated between people. That keeps everyone in the loop and means those returning from days off can quickly scroll back over the previous days to see what’s been happening onfarm.

They hold formal monthly meetings and use visual cues, posters and diagrams to reinforce messages both practical onfarm and cultural aspects such as their values.
Theona says leadership growth takes time.

“It’s not something you just learn and then know, you have to keep working on it every day, sometimes lots of times in a day,” she says.

How people react, how they communicate with others – their self-awareness, self-management and then their social interactions based on their understanding of themselves and others can make or break a team.

“It’s like passing the ball – if you pass it badly then it’s so much harder for the next person to catch it, you can’t just depend on their skills to catch it and be mad if they miss it,” she says.

“It can be hard to get people to see the value in this ‘softer’ stuff but when they start seeing the results, they get it.

“I think if we as farmers want to be a preferred workplace by 2030 it’s something we have to think about.

“What does leadership look like for me? What does it look like in my team? It’s our responsibility.

“I think any personality type can be a leader – it’s in all of us but some of us might have more to work on and be aware of than others and some may need more support.

“We can all take a leadership role in our daily lives even if we’re not the boss. We can use those skills and think – what’s been entrusted to me today, how can I be a leader with this?”

Do you have a new team?

Take a look at this insight into the quiet power of an introvert. The neuroscience might give you that aha moment. Take a look…