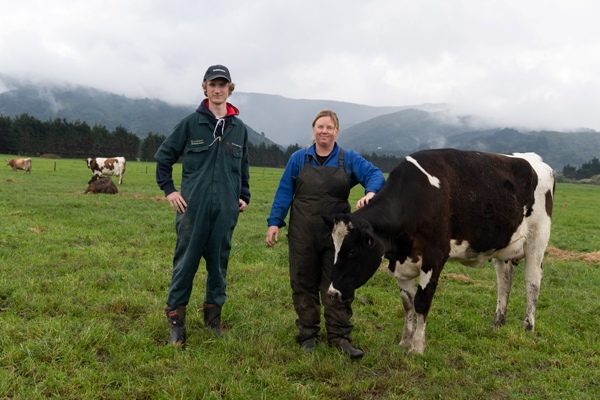 Researching, designing and overseeing the installation of a new effluent system is not the kind of job you tackle everyday but Featherston farm manager Kelli Pailthorpe has taken it in her stride.

Kelli has managed the Geange family’s low-input dairy farm on the outskirts of the South Wairarapa town for the past three years and worked with the farm owners, Greater Wellington Regional Council, contractors and local installers to progress the farm to a compliant system that creates minimal disturbance or offence to the neighbours.

Over the past 20 years of ownership by the Geange family the property has been developed with new races, shelter belts and waterways fenced and planted but when Kelli arrived the effluent disposal system needed major investment.

The 200-hectare farm is run as a self-contained System 1-2 unit that is largely closed, running young stock and replacements on the farm and making all their own supplement – apart from filling the hay barns with ‘insurance’ of 200 extra haybales when necessary.

The crossbred cows are all milked once-a-day from Christmas as after July 23 start of calving the grass grows really well in spring but by Christmas the farm is starting to dry out, Kelli says.

“We can open up the cows early but by Christmas when it’s getting dry it’s good to go to OAD for the staff’s sake as well.”

Kelli runs the farm with one permanent team member, Jeana Adams, calf rearing and relief milking help from Kelli’s daughter Kalya and holiday and busy season help from students Ben and Luke Geange, sons of owners, Ross and Erin Geange who live at Tamahere in the Waikato.

“I think it’s good for kids to get experience in the family business,” Kelli says.

Kelli’s focus is on fully feeding the cows on pasture and protecting their BCS to maximise production but enable good rebreeding and great herd health.

She is a proud of the health and condition of the herd, and talks of the girls with affection, calling them “great girls” and “such a chilled-out bunch”. The cows have earned affectionate names like Tallulah, Ethyl, Spongebob (on account of a square udder), Banana Brain, Blockhead, Eeyore and Piglet.

“We like a nice tidy udder, sound feet and good milk production – happy days,” she says.

“These girls are sweethearts.”

Some upgrades to the cowshed were made 20 months ago, and Kelli says installation of Milfos ACR with swing arms in the 37-aside herringbone shed has had a dramatic effect on the cows’ somatic cell counts.

“We had high vacuum and over-milking problems – we couldn’t get the cups off the girls and get them out the shed quick enough to avoid over-milking and teat-end damage, but with the inclusion of a top-quality teat spray (we use Ecolab Hibatane 2 plus) udder condition is top notch and our over-milking problem has gone, which has led to the big drop in our somatic cell count.

“The cows hold on to condition going on to OAD after Christmas – we pull them out of the herd from late March onwards if the BCS drops to 4 and by late April or May we are usually only milking 150 cows until the end of the season – to make sure they are sitting as close as possible to BCS 5 by calving.”

“And it translates to a higher-protein milk in the new season when the BCS is up there.”

Up to 75 heifer calves are reared each year for a 20% replacement rate.

Part of caring for the cows is making sure they have good shelter from the fierce and prevailing nor-westerly winds that channel down the Rimutaka ranges behind Featherston.

“Around 10km of new shelter belts have been planted over the past 10 years – we like to always have sheltered ‘bedrooms’ for the cows to be tucked up in to keep them out of the wind.”

Providing shade from the sun is important too but maintenance of the shelterbelts is ongoing with trimming on a two-year rotation.

While the rainfall tracks close to the ranges, the farm receives annual rainfall of 1142mm but the fierce winds can really suck the moisture up and dry out the farm in the summer, Kelli says.

Barkant turnips are cropped on 10ha for feeding out in late January and February and then renewed into new Trojan ryegrass and a further 4ha goes from grass to new grass.

“We have a couple of standoff areas to protect pastures but there are always areas to renew.”

An area of 32ha is irrigated by 56 hydrants feeding long laterals with water pumped at 25 litres/second, and Ross is keen to look at putting in a pivot irrigation system, in an area that doesn’t compromise the established shelterbelts.

The effluent upgrade over the past few years was led by installing a new sump at the end of the yard as part of Fonterra compliance moving it further from the shed.

At the same time Kelli opted to put storm water diversion to use in the winter when the cowshed is not in use and also on heavy rainfall days. The effluent spreading area was 12ha, not deemed large enough under Greater Wellington Regional Council rules and so planning began to extend it.

The plans included building storage (as the sump only had two days capacity), resiting the effluent area further from the northern edge of the farm (where Featherston township lies) and piggy-backing on the irrigation area to build the water pressure there.

Permanent pipe with hydrants were plumbed into every second paddock and a Cobra rain gun pulses out effluent in a circle. The 23ha is serviced through 90mm pipe and travels 1.2km from the pump.

A pressure switch turns off the pump if the pipe bursts so there are no accidents, Kelli says.

The effluent consent coming up for renewal spurred the storage discussion and their proximity to town and the consent conditions that no offensive smell was to pass over the fence drove the decision to a bladder to hold effluent.

“The neighbouring properties are important to us – we wanted to get rid of any hint of smell.”

The pond calculator was used to estimate volume and needed to be ticked off by the regional council.

A one million litre Technipharm flexibladder was installed in June, after a couple of weeks of groundworks and piping were completed by Tim Dittmer Contracting, on a flattish spot off the end of the dairy yard.

The base was leveled, lined with metal and chip and a lining installed on top to protect the bag from the stones.

“It’s not supposed to be able to be pierced, the bladder is guaranteed for 10 years but fully expected to last for 25 years,” Kelli says.

A team of six rolled out the bladder and it has been filling since the start of spring.

When the bladder is 1.4 metres high it will be full and irrigation will start, Kelli says.

A grate catches the more fibrous material and the fluid can be agitated through a monopump out through a 90mm pipe and back in through a 160mm pipe at the top. Fart holes in the top release pressure.

The bladder was much cheaper than a pond and while they originally looked at a tank with a lid, Kelli said it wasn’t recommended for the farm because of the winds they encounter.

With that job ticked off Kelli is moving on to an off-farm role with Asure Quality in auditing, after 30 years in onfarm dairy roles she will take her infrastructure development experience with her and step up to a new challenge. But missing contact with her girls might bring her back for
regular visits.