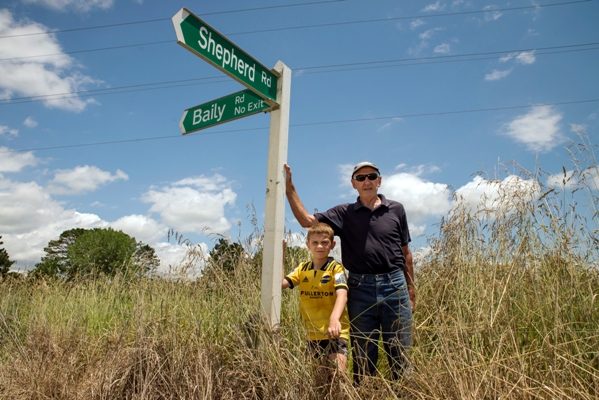 Death is the only certainty in life and it’s important to have a succession plan in place before any such event. Sheryl Brown talked to Paul and Cameron Shepherd about the planning and execution of a successful succession plan for their family farm.

Paul Shepherd lost his wife Ruth to cancer in December 2016, just four weeks after she was diagnosed. It was a massive shock for the family and one saving grace has been that Paul and Ruth had a succession plan in place.

Having started succession planning when Ruth was alive, meant when she died the future they had planned for the farm could carry on as it was. Paul didn’t have to try and sort it out while the family were grieving.

Paul and Ruth also both had the opportunity to put their wishes on paper in a Memorandum of Wishes.

“It’s their asset, their inheritance they’re passing on, their wishes should be acknowledged,” their son Cameron says.

A succession plan takes a lot of time to consider and activate, and for farming families procrastinating over succession, they should start the process because anything can happen tomorrow.

“Mum was 64 when she died, she was perfectly healthy, and she was dead four weeks later,” Cameron says.

“We had to take over more of the daily running of the farm, all of the financial responsibility. It was a big shock and Jo and I got thrown in the deep end.

“If we didn’t have a plan in place that was starting to operate it would have been very difficult. Mum was an integral part of starting it (the succession plan), 10 years ago.”

The strength of a succession plan is in how much thought and planning goes into the set up, Paul says.

“It’s not something you can do overnight. The big thing is we didn’t do anything too fast, we pondered it for a few years.”

When Paul and Ruth started considering the future of their farm, there was not a lot of information or advice around.

Their accountant put them on to Ian Blackman’s book ‘Keep Farming in the Family’ and they found a solution they thought could work for them.

“We have found BlackmanSpargo have a clear pathway to help you do it, every family has a different dynamic, but you can cater the blueprint around that. You can make it work for your family,” Paul says.

“I recommended anyone to read the book, that was an integral part.”

Having the right advisers is vital, he says.

“Unless you’ve got a farm accountant and bank manager that believes in the plan it won’t eventuate. They’re an important part of setting it up and they have to help you activate it.”

The Northland farm has been in the Shepherd family since about 1935, when Paul’s grandfather bought several blocks of gum land and put four of his nine sons on the properties to break them in. Hence the road is called Shepherd Road.

Paul’s father Morris was one of the four sons helped into a block and he later became one of the first shareholders of the Te Hana dairy factory.

Paul and Ruth had four children, Cameron is the youngest and he has three older sisters, Michelle, Pamela and Rachel.

One of Paul and Ruth’s wishes was to treat everyone fairly, whilst allowing Cameron to keep farming – to keep the tradition of farming in the family going.

If that means selling the family land in the future and moving to another farm, that is a possibility. It’s the tradition of farming, not the farm itself that’s important, Cameron says.

Their farm is 1km from the Wellsford town boundary so there could come a time where the town expands and they are unable to farm there, Cameron says.

“Geographically, we might not be able to farm here forever, you have to be realistic.”

Another driver for Paul and Ruth to setting up a succession plan was to be able to distribute some of the capital value of the farm to their children before they died.

Giving their children access to their inheritance earlier means the children have been able to make their own financial decisions and have more opportunities for their own families whilst they’re younger.

“That comes down to the parents, if they’re both willing to forgo some of their money, it’s the planning and wiliness of the parents,” Cameron says.

In 2012 Paul and Ruth formed a new company and their son Cameron and his wife Jo, bought a 20% share into the farm.

“It would have been five years at least from reading Ian Blackman’s book to when Cameron bought the first 20% share,” Paul says.

Establishing a company created a vehicle to buy and sell shares. It makes the pathway of a succeeding child more achievable, Cameron says.

“Nobody can afford to buy a farm outright, but you can buy bite-sized pieces.”

On both occasions, the money for the shares sold by Paul and Ruth has been split equally between the four children as an on-call loan.

Cameron’s share has gone back into the farm, and his three sisters were given cash to spend on what they wanted.

The on-call loans are part of the BlackmanSpargo approach to help deal with the issue of relationships, Paul says.

If you gift the money it becomes relationship money. Relationships can break up and the inheritance money is not protected.

“While I’m alive, it’s a loan, not a gift. Ruth and I can’t control the money once we are dead. But we can while we are alive. If a relationship did break up, I can recall the loan. In our wills it’s gifted then, split up equally between the children.”

Setting it up as an on-call loan is another way to pay for Paul’s retirement.

“If I ever have to charge interest I can. When the day comes I have to officially retire, they can give me 2-3% interest and that pays for my cost of living.”

A key to the succession plan being viable was that Cameron was in a financial position to invest in the farm.

When Cameron left school he went shearing and had his own shearing business. He managed to save enough to buy his first herd of cows and go sharemilking on the home farm in 2007.

As hard as it was to see Cameron go away from the farm, having his own successful business was key to him being able to invest in the farm, Paul says.

“People who make it, either successful sharemilkers or shearers, they work hard and cash it in and that becomes their deposit on the farm.”

Jo inherited a portion of the family farm in Northland. Jo and Cameron used that to buy the runoff and made a lot of improvements to the property. They sold that farm to buy more shares in the dairy farm last year.

“Jo and I have lost three parents to cancer in the last seven years. We’ve had some family help, but we would give that money back to have our parents back.”

Cameron and Jo have three children, Riley, 11, Connor, 9, and Olivia, 7 and losing their three parents has made them even more proactive in planning their own succession.

“It’s made us put good wills in place. Any couple should, especially if you have children – you might not think bad things will happen, but they can.”

The couple have a trust set up that shows the trail of where their individual inheritance money has come from.

Each time Cameron and Jo have bought shares into the company they have got two independent valuations on the farm.

“Nobody is getting mates’ rates, everyone in the family is clear that it’s a business transaction – it’s not just a figure Dad and I pull out of our heads.”

Cameron and Jo now have the majority share in the company and therefore have more interest than anyone to ensure the family asset is well maintained and looked after.

Cameron keeps the communication lines open with his sisters which is important, he says.

His role in the succession planning has been an education, but he’s happy they’ve got a good result where everyone is happy.

“It’s the biggest thing I’ve had to try and arrange, but it’s been very satisfying. Dad gets to stay on farm and my sisters have a family farm to come home to.

“It’s about keeping everyone happy – it’s not just about a money-fest.”

The farm itself has never been performing better. This is the first season of full autumn calving, after two years split calving and the farm has done record production with less cows.

The Friesians average 600kg and currently are averaging 550kg MS and the goal is to get them up to 600kg MS/cow.

The main reason for switching to the winter milk system has been driven by Northland’s climate. Their farm still grows 20-40kg drymatter (DM)/day during the winter months, but the summers are too inconsistent.

“This farm gets extremely wet in winter and extremely dry in summer. Our most unreliable growth is November to March.

“Even though its wet in winter it’s better to be autumn calving, we only have one class of stock to look after in winter.”

The switch has meant it’s been a lot less stressful in spring, getting home at 5pm and knowing the cows are comfortable under the covered barn and not doing pasture damage.

“Calving in March and April is a breeze. It’s gives us a better lifestyle for us and it’s easier on the cows – it’s a better work/life balance,” Cameron says.

They built a new farm dairy and a 400-cow covered feed pad with rubber matting nine years ago. Putting the roof on and the rubber matting was on the advice of the bank manager and it was the best decision they could have made, Paul says.

The move to winter milking means they are fully utilising that investment.

“There are days the cows have zero grazing during the day, they can stand off all day and with the rubber mating they can lie down.”

The downside of winter milking is having to ensure a healthy feed budget and to have all feed on hand or on contract, Cameron says.

They grow 10ha maize on the milking platform and lease another 5ha nearby to grow more maize. Lowering the stocking rate this year means they can make more grass silage to have on hand. They also contract palm kernel blends.