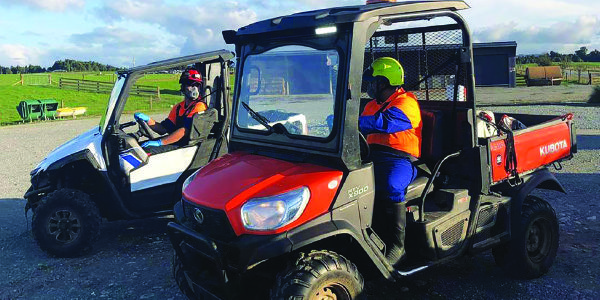 Planning for the worst has helped guide a major dairy operation through the Covid-19 lockdown. Anne Hardie reports.

The threat of Covid-19 and then lockdown prompted a set of strict safety protocols for Pamu Farms which prepares them for the worst if an outbreak occurs on a farm.

On the West Coast, Pamu’s dairy business manager, Cameron Walker, is in charge of 10 dairy farms between Cape Foulwind, Lake Brunner and Reefton, plus three dairy support units and two machinery syndicates. Between them, some 9000 cows are milked and more than 4500 beef and young stock carried, with more than 60 permanent staff and another 20 casual staff needed through the season.

It’s a sizeable staff to keep safe even through a typical dairy season when rain is the main topic of conversation on the Coast. Safety has been a focus for Pamu Farms for some time, but when Covid-19 hitched a ride into New Zealand, it got a lot more serious.

As Walker points out, precautions put in place during lockdown and level 3 need to stay in place throughout the worldwide pandemic because if an outbreak occurs on a farm, it would have repercussions for all the staff and the business operation.
“It’s about keeping our people safe and healthy and avoiding an outbreak because that will severely impact on how the business can operate. One person can have a big impact on the business and the ability of that business to operate is challenged. You might have one person sick and that might mean the other three to four are under restrictions and then how do you bring people into that bubble? And the flow-on effects of that.

“So our role is to plan for the worst and what we would need to do to continue to operate. Would we milk that herd through another shed with another team? It depends on the situation.”

He says it was fortunate the industry was nearing the end of the season when Covid-19 showed up and farmers were now holding their breath to get through to the end of May when they could have a bit of a breather. At least until the next season gets under way.

When lockdown was announced, Pamu had the benefit of a Wellington team as well as the infrastructure to oversee 124 farms around the country and 600 employees. Initially the Covid-19 team met daily and then weekly as it determined how Pamu’s farm business would operate during the Covid-19 outbreak.

“We’re fortunate as a company we’ve taken health and safety seriously for a long time and a lot of what we’re doing now is part of what we do already. Instead of a complete change, we’re adding something into the risk instead of a transformation. It’s not as much of a shock to our farm team because they operate in that manner anyway.”

At the beginning of lockdown, ahead of social distancing and hygiene was the need to impress upon employees that it was a privilege to be part of the essential service sector. He says it wasn’t a privilege to be taken lightly, while there was also the serious responsibility of looking after the team.

That meant identifying high-risk members of the team in terms of age and health conditions, but also those with spouses or partners who worked outside their bubble in high-risk areas so they could work out how to mitigate those risks on the farms. Mental health had to be considered and Walker says the stress on other family members and the community affected those around them.

“Some employees might have spouses, partners or family members that might be under stress and they may be indirectly impacting on them. So we’re checking not only the workplace, but homes as well. We have a confidential support line and people do use that. It’s not just mental health, but pressure in any way.”

Likewise, younger employees living alone on farms are often already in an isolated area and Covid-19 restrictions places further restrictions on them. They get some social interaction at work, but he says it is a difficult time for those living alone on farms. In the workplace, the farms have altered the rosters so the same couple of employees work together instead of mixing with four to five. In the dairy, the aim is to have just one person putting cups on the cows instead of two people standing together. Walker says one person might milk the first half of the herd and then another milk the last half. If there has to be two staff members, the farm keeps the same two people working together.

Two employees working together anywhere on the farms are required to keep their two-metre distance and where possible, one person will do the job instead of two. That is especially important if they need to get into a vehicle, he says, with disinfectant and gloves in each vehicle to reduce the potential of the virus spreading if it was introduced.

If operation managers or similar visit a farm, they travel in their own vehicle and talk with managers via radio or phone as they go around the farm. That ensures they don’t risk taking the virus from farm to farm if there was a case of Covid-19. On the machinery side of the business, tractor drivers now stick to one tractor and don’t swap machines, so once again reducing risk.
When it is time for smoko or lunch break, communal areas such as the staffroom are now out of bounds. If staff want a tea or coffee, they bring their own to work and their own mug. Sometimes you can’t get around needing two people near each other to get a job done on a farm, such as working in yards or making a repair that requires assistance.

“In those situations, we’re asking the team to take five and assess the risks. Think through how you can do the job more safely.”
Walker says one of the plusses to come out of Covid-19 restrictions for Pamu’s West Coast teams has been the wider use of technology that has connected farm workers through to business leaders and support teams in Wellington.

As a large-scale business, Pamu had already invested in technology on farms which placed them in a good position to stay connected when Covid-19 restrictions came into force. Managers have moved from Skype to Zoom meetings where up to 60 different people could join a national meeting.

“We were already doing a lot of that at business management level and above, but now that has filtered down to farm level which means our farm teams can be connected with the top brass which is kind of neat for them. I definitely would like to see that continue.”

Now that farm teams are making more use of technology because of Covid-19, he suspects they will continue to use it post restrictions instead of getting in a vehicle and travelling from one farm to another, or even different parts of the farm. Other aspects of technology have been brought into the farm operations faster because of Covid-19, such as visitors signing in electronically rather than in written form. It now includes a questionnaire focusing on risk management for any contractors or staff from other farms entering a property, ensuring they don’t introduce any undue risk.

“I’m really proud of our teams – how seriously they’ve taken it and what steps they have taken to mitigate risk within that bubble. They’re often working with a minimum number of people to do that.”

Non-essential maintenance was put on hold and Walker says they kept talking with suppliers and contractors through lockdown about time frames and their ability to complete some of that work within the financial year when restrictions eased. If that couldn’t happen, then the business needed to plan for that.

It’s not just maintenance on farm infrastructure, but also homes and with more than 50 staff homes spread around the 13 Pamu farms on the Coast, he says there is always a new roof, painting, new carpet or something that needs to be done, which was put on hold. As restrictions eased, they would need to prioritise maintenance as contractors would also be in catch-up mode.
“We also want to support our contractors and suppliers and get them back on their feet as early as possible.”

In the middle of April, the West Coast Pamu farms still had some cull cows on the properties waiting in the works’ queue. But if they hadn’t made the decision to quit most of the cows earlier than usual, it could have been dire. Between 1600 and 1800 cows are usually culled or sold from the West Coast dairy farms each year and when concerns arose in January about the beef market to China, they booked the cows for February and early March – four to six weeks earlier than usual.

“We thought we’d offset that by milking the remaining cows longer. It’s been a big problem (slaughtering cull cows) over the whole country and that’s putting pressure on feed supply which is then putting pressure on the supplementary feed market. We’re trying to be proactive by having enough supplements for balance date around 25 September.”

Most supplements are made on farms on the Coast, with additional supplements in the form of silage, straw or barley bought in from Canterbury. Pressure on that market has prompted the operation to try and lock in bought-in feed and price as well. The next challenge, Walker says, is tackling the uncertainty of the milk payout next season that so far has varied from predictions of $6.40/kg milksolids (MS) to Rabobank’s recent forecast of $5.60/kg MS.

“It’s prudent for us as a large-scale business – or anyone – to be prepared for each scenario and how we operate under those market conditions. If there is talk of a reduced payout, we have to look at our costs and what sort of system we operate and have to be making those plans now.” 