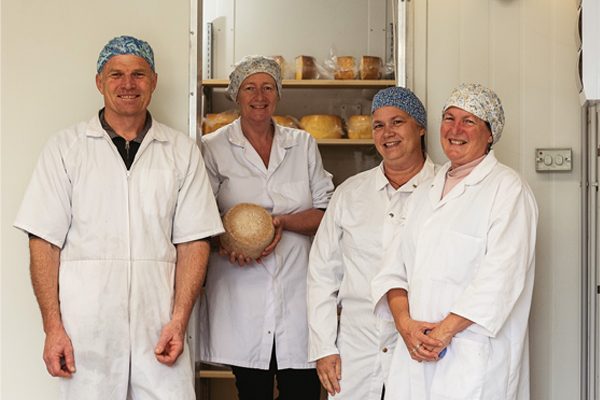 After a career in science a Manawatu couple are using local milk to make a range of artisan cheeses. By Jackie Harrigan.

Maybe the origins of Adrian and Jill Walcroft’s cheese-making business were working for a year in France as research scientists and falling for the slow food movement, or being given three sheep as a wedding present by Jill’s aunty, or Ade doing a cheese-making course and creating artisanal fromages on the kitchen table early in their marriage.

Regardless of the origins, when Ade decided to chuck in the crown research scientist life, in 2011, the couple wanted to start a small business and set up a small creamery in the Pohangina Valley, Manawatu.

Their 13-hectare smallholding on a former dairy farm in the valley gave them a base and setting up a creamery in a couple of kitted-out Portacoms on the property was a great choice, Jill told farmers at a Smaller Herds (SMASH) field day at Pohangina in April.

“During cheese-making things need to happen at odd hours – it’s a 24/7 process – so it’s great to be able to pop across to the creamery and do the various processes,” Jill said.

“The portacoms give us the ability to remove, repurpose or add-on and being the DIY kind of people that we are, we spent a couple of years setting up the cheese-making process and equipment and designing our risk management plan (RMP).

“Our 400 litre milk vat is like the mothership – and while it was expensive, it is triple-layered stainless steel and can pasteurise the milk and then make the cheese in it.

“We decided not to milk our own animals, but to concentrate on making the cheeses so we have been super grateful to connect with local farms for milk supply.

“Our RMP is a beast, but it’s been worth taking time to set it up well – the annual audit has been pushed out to 18 months.”

The company also has a rigorous testing regime for pathogens, alongside access to milk test data from their milk suppliers’ results.

They began making cheese in 2014 and haveslowly ramped up production and built up theirsuite of artisan cheeses. The cheese offering now ranges from soft cheeses Marama and Coppermine (similar to camembert and washed-rind brie) and a soft goats’ milk Opiki Ma and Do Rei Mi, semi-hard tomme-type cheese Epitome, made from lower fat milk, (also with cumin and smoked, truffle and fenugreek seed flavourings), blue cheeses Blue Rhapsody and Nanny Blue (goats’ milk) and brined cheeses Fiesta (feta) and halloumi (also made in garlic, chilli and original flavours).

Having decided not to try and supply their own milk, the couple have built numerous supply arrangements with local farmers and love that their milk is produced so locally that they can pick up a vat of it and be making it into cheese the same day.

They have four main suppliers of milk, Jersey milk for the soft cheeses from Ian and Aly Passey’s Pohangina Valley herd (see story page 30); Friesian lower-fat milk from the Stewart Dairylands herd at Bunnythorpe for the Epitome tomme-style cheeses; winter milk from Arran Farm of Feilding from their main herd through the winter and their A2 herd for a special range of A2 cheeses sold out of their farm shop; and milk from the Henson’s herd at Rongotea for the goats’ cheeses. Alongside locality, the quality of the milk is the most important factor the Walcrofts look for.

“All of our suppliers have very low cell counts – high counts change the quality of the flavours and the yield of the cheese,” Jill explained.

“They also let us know if they are feeding the cows on a crop of turnips or brassicas – because they can change the flavour profile of the milk and of the cheese.”

The couple tend to make cheese twice a week and have a cycle of production that sees the making, ageing, wrapping and marketing of the different cheese varieties depending on their individual ageing needs – followed by marketing at the regular markets the couple attend to sell their products.

They have been regulars at the Friday Feilding Farmers Market and Saturday morning Whanganui Riverside Market for many years now, and attend two Palmerston North farmers markets each month, along with numerous regional fairs and shows around the Manawatu and the Wellington Food Show. Cheeses are also sold through more than 25 delis and cafes around the country and from the Creamery door by appointment.

The 2020 onset of Covid-19 encouraged them to set up an online shop to sell the full range of single cheeses along with a range of goodie boxes with artisanal crackers and preserves. Whole cheese rounds for weddings and parties are the latest product Jill has developed. She is active on social media, building awareness of the brand and using it as a way to keep followers abreast of new products and news of wins at the cheese awards, which have been plenty over the past few years.

She draws on the local themes – local milk made into local cheeses by locals, the beauty of the beautiful Pohangina valley through the seasons, new ways to enjoy the cheeses, flavour matching, and brand building messaging.

As with any small business the Walcrofts have been mindful of sustainable growth and have recently taken on some part-time labour to give a hand and take some of the manufacturing and marketing load.

“We have been slowly ramping up production, despite the Covid pauses and it’s great to have the freedom to organise an extra milk pickup whenever we need it. Its just a matter of making a phone call to the Passeys the night before,” Jill said.

“We are planning to move to making cheese four days a week and the ability to double production will allow us to grow the team and give us more time off and remove some key risk – by having another cheesemaker available.

“Eventually we might like to step back and keep an involvement but be more hands-off – Adrian has fallen for sailing so he wants to have more time to explore that.”

The Passey family have been locals in the Pohangina Valley for four generations now, and their high fat Jersey milk is featuring in a range of local cheeses.

Ian Passey’s ancestor was sponsored to come out from Shropshire to become a farmer by Bishop Monrad, an ex-Premier of Denmark who settled at Karere just out of Palmerston North with his family in 1866. The bishop only stayed in New Zealand for three years before returning to Denmark but his sons stayed on and farmed with their families.

The Passey’s bought their own farm in the Pohangina Valley in 1912 from the Wagstaff family who had cleared much of the land – they planted the 120 year old oak tree still growing near the woolshed and another, much older remnant totara tree was too large for the cross-cut saw to fell. The Passeys’ roots go deep in the valley and Ian has been on the family farm since a summer dairying job in the late 80’s, while he was a Massey student, “flicked a switch” for him and convinced him to take on the family farm. He and his wife Aly run 200 ‘Kiwi-cross leaning towards Jersey’ cows on the river terraces of the Pohangina river, and run 105 breeding ewes, all replacement dairy stock and 15-20 dairy beef steers on the steeper sidings between terraces.

The 90ha milking platform is run by Ian on his own with a part-time worker and while he says it’s busy with the two operations, he is passionate about low-input farming and loves the interaction with his animals and farming Jersey cross cows that will produce at an efficient level for 10-12 years. Of the changing times in the dairy industry, Ian told visitors at the April SMASH day that the farming industry has always been a place of change – solving problems throughout the history of agriculture is what Kiwi farmers do, and have always done, well, he said.

On his own operation, he and Aly have changed to Once-A-Day (OAD) milking in the 2021/22 season, which he says has been a mixed bag with a very poor spring season.

“We used to milk OAD for six weeks each spring and then go TAD, but I thought that this would be a good season to change, because the high payout will buffer the loss of production.”

Twice a day production was 79,000kg milksolids (MS) in the last season, about average for the herd, Ian said.

“We are 13% down on last season, but I think we would’ve been 5-7% down anyway, with the difficult season – but we hope to get back to 75,000kg MS production levels over the next three seasons.”

“There is quite a different feel to the season though, just milking OAD – there is less pressure, even though the daily milking is longer and the grazing has changed – I have more time to monitor and change things if I need to pull the cows out of a paddock or move them along.

“I was surprised at how many changes OAD has created.

“The cows are certainly happy on OAD, they have adjusted very well, and they have a cruisy life.

“Just having the morning milking is easier on them in the summer heat, they can stay under the shade and I think its better on the land.”

The supply partnership with Cartwheel Creamery came about after a phone call with Adrian and Ian said it is really nice to see his product being processed locally.

For the past four years Ade rings Ian in the evening before he needs milk.

“He turns up with his trailer and vat, listening to RadioNZ, I hear the dog bark and he’s gone again.

“He has been coming regularly a couple of times each week and the small volume means we are only selling about 1-1.5% of our total production to them for the cheese-making.”

“It does mean we have an audit with MPI as they require Cartwheel Creamery to have their own RMP for this farm as a supplier of milk for cheesemaking so we have to comply with that.” But the couple really enjoy seeing their milk being made into artisanal cheeses and sold locally, saying it’s a great local partnership.