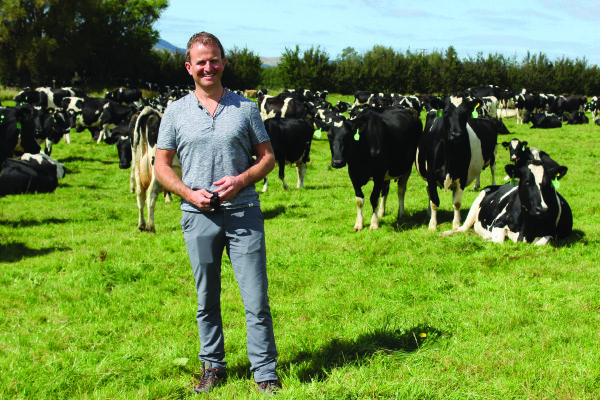 Words and photos by: Karen Trebilcock

Few calves go on the bobby truck at Geoffrey Wilson’s each spring.

Most are too valuable with many of the bulls and all of the heifers either kept onfarm or sold to rearers.
His Telesis stud on the Taieri near Dunedin has produced some of the top Holstein Friesian sires in the country – bulls such as Bentley, Stirling, High Time, Esquire and Emirate. This year Player is entering LIC’s Premier Sires team.

Artificial insemination starts late October for the 310 in the milking herd and finishes usually before Christmas with high-BW nominated semen used throughout.

Tail-end cows in December and early January either go to short gestation semen or the farm’s bulls and the resulting calves from the natural matings are kept – the bulls have BWs in the mid-200s so why wouldn’t they?

Geoffrey says his breeding aims are key to keeping calves off the bobby truck.

“Very good conformation, which is the udder and everything else that goes with that along with body style, and then easy to manage cows with good fertility, low somatic cells and high BW.

“The BW is literally a dollar sign. It shows that the cow can produce offspring that will efficiently make you money.
“I want animals which will live long and healthy and productive lives.”

He took over the Telesis stud in 2003 from his parents Philip and Heather who had started dairying on the Taieri in the 1970s.
They produced several bulls used by either CRV Ambreed or LIC including Bailey, Celsius and Firenze, which won the Mahoe Trophy in 2007, awarded to the Holstein Friesian bull with the highest aggregate points for BW, protein BV, fat BV, longevity and type traits.

Back then the herd was town supply and full of big, high-producing Friesians which “milked like crazy” but had a reputation of not having the flashest fertility.

“There was a stronger influence of overseas genetics in the Friesians at that time and high pins was the predominant trait in the herd that I was motivated to improve as quickly as possible.

“The correlation with high pins and fertility and mobility is really noticeable.”

At the moment he’s chasing A2 with all the bulls used last year A2A2 and he requested the 20-something contract matings done onfarm be the same as well.

“While the Jersey and crossbred breeds are predominantly already A2, the Friesian breed has a lot of ground to make up if we want it to be on par with them and I am keen to do my part to help.

“I don’t want the Holstein Friesian breed to be left out because of it.

“I want sires that can breed cows that are relevant for a progressive industry.”

Once the highest BW herd in the South Island, and the fifth in the country, changes to the economic value of liveweight and fat to protein ratios, the herd has dropped to 121 BW and a PW of 139.

“It’s well off the pace of the top herds now, but there are still plenty of compelling reasons for anyone to breed Friesians,” he said.
“If the outcome of the changes to BW is the breed becomes more efficient and balanced then the current challenges will become advantages.”

Geoffrey tries to select bulls in the autumn, defining his breeding objectives then.

“In the deep south, with later mating, we enjoy valuable information from AE updates while we are still mating and I always need to be careful not to develop last-minute BW fever.”

Making sure the rearers have confidence in what they are buying is also important.

“Whether an animal stays a few days on the farm or a lifetime, I want to provide a safe and healthy environment for it so it stays healthy and feels nurtured.”

The herd is vaccinated for BVD, DNA tested for parentage and also classified. With the emergence of M. Bovis, the herd is now closed.

All calving animals are also vaccinated for Rotavirus which not only benefits the calves reared, but also gives rearers a lot of confidence.

Herd testing has been five times a season but this year dropped back to four.

All of the cows are calved in one of the two herd homes by the dairy reducing calf losses.

Calving cows are checked throughout the day and night so there are no mistakes in which calf belongs to which cow.
“The team use elastic neck bands and I tag everything immediately so when we get the DNA results each year there is only one or two swapped around if that.

“That’s the beauty of breeding – the level of intensity and passion is there to get you out of bed to see the new calves. They ooze potential and after all, they are the future.

“Breeding gives you the enthusiasm and the passion to override the exhaustion. You find you can be superhuman when you need to be.”

While no heifer calves go on the bobby truck, some Jersey cross bull calves out of the heifers do.
He rears about 30 to 40 Friesian bulls, some are from contract matings and the rest are for himself or to sell to other dairy farmers when they are 18 months old.

However, most Friesian bull calves have been sold to a local rearer for the past seven years.

If there is no market for the late ones they are made into steers and run with the heifers.

The farm has an 115ha effective dairy platform but is 169ha all up – plenty of space for bulls and young stock.
Yearlings are synchronised and mated using AI to nominated easy calving Friesian genetics with Jersey bulls following up.
Mating yearlings has been, he says, “traumatic at times”.

One year he had 25 in-calf to AI and of those only three produced heifers.

“But two of those three heifers became elite so the initial heartbreak was somewhat offset.”

A strong Holstein Friesian supporter, the introduction of Jersey bulls for yearling matings has caused the few resulting brown cows to stand out in the milking herd.

“Most of the crossbred calves are sold but some are too good and then there are the ones that are just that damn cute and friendly that they strongly insist on staying. They make the decision for me.”

His replacement rate is 25% but most of the cows exiting the herd are sold to other farmers, with few culled going to the works.
He’s been a “picker and chooser” of genomic selected (DNA) sires since its inception but last spring went all in.
“It certainly has had its ups and downs at the beginning but it has improved immeasurably and the people doing the selecting have given me the confidence to now use solely genomic selected bulls.

“And the resulting calves this year will be 181 BW which is a 60 BW jump on the herd so that proves its worth.

“There will always be some minor hits and misses with genomics but that is breeding. You get that even with daughter proven bulls.”

He has a 10% empty rate but most of them don’t go to the works at the end of the season either, instead they clean up after the herd in the summer and deal to the rougher blocks.

“You could easily call me a generous feeder of cows so we use the dry cows to get the residuals down.”

They’re also used as the recipients of embryo transfers (ET) and although they usually calve far too fat for anyone’s liking, some of them do more than 1000kg milksolids (MS) the following season, helping to make up for their year off.
“We’re really careful to make sure we don’t have metabolic problems in the spring. We keep the colostrum cows on once-a-day and we make sure our minerals are where they should be.

“We’ve got every kind of cow here that could have metabolic problems – fat cows, old cows, the full spectrum – but we don’t have any downer cows.”

“I won an award for the top dollar earning veteran cow in the country and she was 13 and we had the photo taken with her and her mother who was 20. Now that’s good breeding. One of my underlying objectives has always been that they’ve got to last.”
For anyone starting out who wants to breed top cows and bulls he advises they should formalise their breeding objectives, set goals, maybe buy some elite cows, or do some ET work and definitely AI their yearlings to top bulls.
“And feed your cows well so they are in the prime position to get in calf. To make the most out of good cows you have to have good feed management.

“Keep it simple but also follow your heart. Don’t be led by others. The diversity of ideas out there on breeding is amazing but if it’s your passion, not someone else’s, then it will keep you going.

“But seek advice. There are a lot of people who love to help. That is one of the strengths of the dairy industry that we can all be proud of. We’re very good at sharing information, sharing wisdom.”

“It’s a great forum filled with some very brilliant minds. There’s always a frank discussion on it.”

He also encourages farmers to be “positive and progressive”.

“Do the things that make you feel good – whether it is planting a few natives or putting together a breeding plan for your cows. It’s the key to wellbeing.”