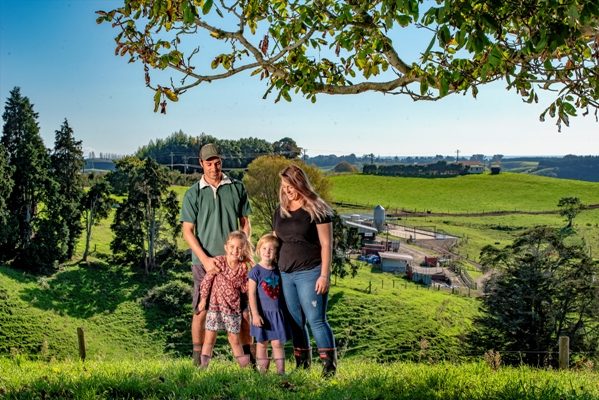 Cam and Jess Lea have earned the respect of their neighbours to the point that four farming couples have backed them financially into their first sharemilking position after their second year in the industry. Sheryl Brown reports.

Four Opotiki neighbouring couples have backed Cam and Jess Lea into their first sharemilking business, holding 16% equity share apiece. Andrew and Kelly Clarke, Dave and Nat Wilson, Rob and Moira Anstis, and Colin and Maria Eggleton are all born and bred in Opotiki and knew a good investment when they saw one.

Cam, 28, and Jess, 27, sold their house, their nice vehicle and their boat to put $75,000 into the equity partnership and borrowed the rest to buy the Jersey herd that was already on the farm.

“Getting these investors has put us into a different ball park altogether. Money and opportunity don’t always come at the same time,” Cam says.

The opportunity came after Cam had worked just two years in the dairy industry as 2IC for Andrew and Kelly Clark.

‘I hold Colin and my agribusiness tutor Gillian Searle in high regard with the teaching and mentoring of the finer details of operating a business.’

Andrew told Cam and Jess about the potential of a sharemilking position coming up on the McDonald farm next door to Colin Eggleton. The couple interviewed and were offered the position on condition of finance, but after doing the numbers they knew they were short.

“I talked to Andrew and he said he wanted to support us,” Cam says.

“Rob had also said to me that if we needed backing then to give him a bell. So we sat down with everyone and they had faith in us to do it.

“We are really grateful to them to allow us to get to 50/50 in two years without family backing. It’s fast tracked our equity growth.”

Cam had a rural upbringing, and after school he got a job for Te Awamutu contractor John Austin for six years.

He met Jess when he was working in Hicks Bay and the couple bought their first house in Te Awamutu and started a family.

Cam’s long hours meant he was hardly getting to see their two girls, Ayla and Kensi.

“Cam was working really long hours in the maize season and the girls didn’t get to see him,” Jess says.

Jess’ family is from Opotiki so the couple decided to move there and Cam looked for a job on a dairy farm.

He was keen to work for a farm owner, rather than a sharemilker or contract milker, because he wanted to learn as much and as quickly as he could, and as fate had it he got the job on Andrew and Kelly’s farm.

“Andrew has been my mentor, he knew our goal was to go sharemilking and it’s really been him that’s made it happen,” Cam says.

During his second season Cam bought a $14,000 harvester along with Andrew, Rob, Dave, and Colin.

The farm owners all owned a rake and trailers between them and now all help each other to do grass silage each year, including covering the stacks.

“It’s what neighbours used to be like, and it’s a massive cost saving. We harvest the silage for about 5c/kg,” Cam says.

It was the start of a budding relationship that became an equity partnership for Cam and Jess to go sharemilking.

Cam proved to Andrew and Kelly along with his neighbours that he was reliable and a sound investment.

Cam showed he could do the hard yards and he had a spectacular work ethic, Kelly says.

Andrew and Kelly own a dairy farm and have investments in kiwifruit and avocados. They knew Cam was a good investment to back, but more than that they wanted to help someone into the industry.

“It’s not like any of us investors thought we would make a million dollars out of it. It is a reasonable investment, but it’s more about giving them a break,” Andrew says.

“He’s very capable, he came from a contracting background and he’s very practical and very researched. He has a lot of ability but didn’t have family backing.”

The cash investment by each farm owner wasn’t huge in the scheme of their own businesses but it was a way they could help the next generation. Cam and Jess did all the hard work and put forward thorough budgets and a plan, Kelly says.

“I don’t understand why more dairy farmers don’t do this with their workers,” Andrew says.

In an industry that’s only getting older, the only way to get young people into the industry is to help them, people can’t do it on their own, he says.

Dave and Nat Wilson had been in a previous equity partnership, so their knowledge and skills were pivotal in setting up the finer details of the contract, Cam says.

The farmers have agreed to keep their investment in for five years and then after that it’s up to Cam and Jess what they want to do.

“We will see where we go from there, we can either buy them out or keep their money in and get a bigger job, or something that will give capital gain,” Cam says.

Cam has almost completed the Diploma of Agribusiness through Primary ITO, which along with Colin, was pivotal in understanding business structures and budgeting that allowed he and Jess to develop their business plan and goals.

“I hold Colin and my agribusiness tutor Gillian Searle in high regard with the teaching and mentoring of the finer details of operating a business.”

The couple are on track to have enough equity to move to a 500-600-cow sharemilking position next year after their three-year contract finishes.

The couple’s debt:equity ratio was 62:37 in their first season and they are on target to switch that to 32:67 by the end of their third season.

Ideally, they would love to stay in the Opotiki area, but unfortunately there are not many sharemilking jobs that size around the district. It would be great to get a second sharemilking job a similar size and keep the one they have, but Cam knows realistically most farmers want the sharemilker to be on the farm running it every day.

The couple are paying off debt and building stock numbers. The cashflow on the job is not ground breaking, but the advantage is they have the ability to increase milking cow numbers and young stock on the farm.

“The goal is to maximise numbers,” Cam says. They bought and milked 300 cows in their first season and can go up to 350 on the milking platform. They started with 50 young stock on the property and have increased that to 75 plus some carryovers.

The farm topography is rolling to steep and during the summer months the pasture is dominated by kikuyu grass, harvesting 12.5 tonnes drymatter (DM)/ha.

The farm uses a super phosphate mix and Cam applies 80 units of nitrogen/ha/year as needed.

Having the in-dairy feeding capability and a farm dairy with automatic cup removers is one of the advantages of the farm, as they don’t have to hire another full-time labour unit.

It’s not viable for them as a couple milking 350 cows to employ a fulltime staff member, when they’re trying to increase equity and pay off debt, Cam says.

They made a $40,000 profit before retros last season, which would have gone to a person’s fulltime salary. Cam and Jess run the farm most of the year, with relief milkers and some support during spring.

“Jess and I are really interchangeable on the farm, we both do all jobs,” Cam says.

One morning Jess will get up and milk and Cam will look after the kids, and the next morning they will swap roles.

“It works well and it allows you to stay fresh.” Although that may change this spring, with Jess expecting their third baby in October.

This season they went 16-hour milking in December compared to November the previous season and noted there was no benefit of being on TAD longer and then transitioned to OAD in February. The cows have to walk up to 2.6km over hills on riverstone races so it’s good to give their feet a rest in summer, Cam says.

“The 16-hour milkings meant the cows didn’t drop in production unlike we do with OAD.”

A lot of Opotiki farmers are full-season OAD or go at Christmas time and make the most of the lifestyle, he says.

Cam would like to start crossing the herd with Friesian this year to get some more hybrid vigour. The couple used Angus bulls across their Jersey herd last season, and got $50/calf. They

didn’t have to worry about bobby calves and it was a better income than the $15/calf.

The couple entered the Dairy Industry Awards for the second time this year and won the Meridian Farm Environment Award.

Since they’ve been on the farm they’ve fenced off some marginal land – one area where they lost a cow after she fell off the edge of a cliff – and are looking to grow some manuka seeds and plant them out on the farm.

“We want to farm consciously, but as sharemilkers we can’t over capitalise.”

Last year they got extremely helpful feedback from the judges on their business. The awards process made them formalise their business and they now text everything so they have a record of daily happenings on the farm.

This year they won’t enter the awards because they will have a new baby and will need to stay focused on finding their next job position.

The competition to find good sharemilking positions is tough and you’ve got to stand out.

“There is huge competition in the 300- cow zone. With our investors it allows us to get into that bigger range where there is less competition.”

Sharemilking is a high-risk, high-reward industry, and long-term they want to ensure their risks are spread out.

The couple would like to invest in a residential property or horticulture business and are also watching the sharemarket and learning more about that.

Sharemilking has good returns at the moment, but it only takes a couple of bad payouts and the cow values to go down, Cam says.

Their investors also have their money in other pockets outside dairying such as kiwifruit investments. Having that diversity in their business is something Cam and Jess are keen to replicate.

“They’re an awesome bunch of people. All of them are forward thinkers. They’ve all given us the idea not to do the norm as well. I think the only way to go forward is to diversify.”

Capital gains is how people have made their money in past generations and Cam and Jess are looking for an opportunity to invest in property which will hopefully be their nest egg.

“If we can invest in something that can service its own debt, and we can benefit the value in another 20 years – something that is low risk but still good returns.

Their ultimate goal would be organic dairy farming, but organic sharemilking opportunities are scarce.

“We want to be able to retire comfortably. And we want to make it that we can put our daughters through university or into a future for them, to help them out. We both haven’t had that opportunity,” Jess says.