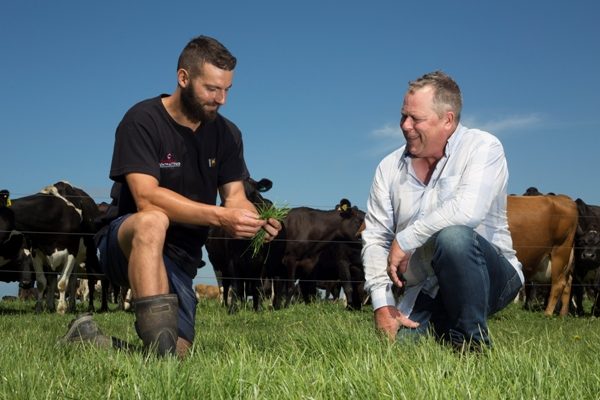 It’s a dream opportunity – a guaranteed job in the United Kingdom with a cash grant to get you there and then the offer of a job back home when you’ve seen some of the world.

It’s a scheme that’s also being offered by Rawson only in reverse, so keen young people from the UK get the opportunity to come to New Zealand and work on one of Mason’s farms.

“We’ve had a few people over the years coming this way from Tom already and this seemed like a good way to start reciprocating and to also try and attract some good young people into the business and the industry here,” Mason says.

The aim is to find young people who have their sights set on farm management or beyond and the offer for Kiwis involves working on one of the Terracostosa farms for at least six months before heading off to the UK to work there for Evolution Farming.

Mason says the young person will still have to “measure up” onfarm.

“We don’t want to be sending someone over there who’s not suitable – it’s our reputation on the line.”

Mason says that while the minimum period on the Canterbury farms is a must they’re flexible about how much longer the right person might stay on.

“They could be with us for the whole season or even longer but we do need them to be around over that busy period from calving through mating.”

‘If we’re going to be expected to fill their positions with Kiwi’s we have to start thinking now – is there a way we can attract them into our business.’

As well as a job in the UK, the offer includes $2000 for travel and, for the right person, the opportunity but not the obligation to return to work on one of the company’s properties.

The Canterbury farming company is an equity partnership which milks 3600 cows and rears its own replacement heifers on five coastal farms.

They supply both Synlait and Fonterra and have A2 milk, Grassfed and winter milk contracts.

Mason says Rawson’s Evolution Farming is an innovative company which leases land and sets up farms that are managed with an emphasis on a pasture-based system.

Rawson says this season it will peak milk 2500 cows on five units with 24 staff.

“There’s also some sheep and beef and machinery contracting so we currently have a great supply of young guys and girls that are keen for this sort of arrangement.

“We’re also well-placed to offer a great year for whoever comes to us from New Zealand with a variety of job roles to suit the individual along with meeting Tom’s expectations as an employer,” Rawson says.

We are looking for a passionate and self-motivated individual with enthusiasm for the dairy industry. You may already have a couple of years dairy experience, be a recent graduate or new to the industry – we can tailor our scheme accordingly. You must be a team player who can tackle a challenge meaning good communication and leadership skills are required.

The operations are in Lincolnshire, Leicestershire, Ayrshire, Yorkshire, Cheshire and Norfolk.

Rawson has visited NZ and the company philosophy is to run simple systems by UK standards with block calving rather than year-round and have a high proportion of the cows’ diet coming from home-grown grazed pasture.

“What they’re doing is very innovative in terms of the pathways they’re creating for progression in farming so it’s a good chance for a young person from here to see other ways of doing things,” Mason says.

The scheme also gives them and their families a bit more security in that no matter whether they’re coming here or heading to the UK they have a point of contact and someone who can help them out if they run into any problems on their travels on the other side of the world.

Mason says they’ve had numerous young people progress within their business, some starting out with holiday jobs during Lincoln University holidays.

“We’re hoping that this kind of opportunity helps us attract more of those kinds of people.”

There’s a shortage of keen, young New Zealanders coming into the industry and changes to immigration rules are only likely to accentuate the problems farmers can have recruiting staff.

The Terracostosa scheme was formed with one eye on the challenges immigration changes will bring.

“We have six staff who will all have to leave the country under the new changes some time over the next three years as their visas come up,” Mason says.

“If we’re going to be expected to fill their positions with Kiwi’s we have to start thinking now – is there a way we can attract them into our business.”

Fraser Campbell is farm manager on Terraverde, a 970-cow property owned by Terracostosa at Dorie, towards the coast from Rakaia.

It has a winter milk contract and autumn-calves about 100 cows along with milking the best of any empty cows from the other properties so that up to 160 cows are milked through the winter.

Fraser arrived as 2IC part way through the 2016-17 season and then took up the manager’s position in June.

Originally from Taranaki, he worked for the Masons when he was at Lincoln University completing a Diploma in Agriculture and a Diploma in Farm Management.

The 31-year-old worked on farms in NZ before heading off on his overseas experience (OE) which included the UK.

“I wish this kind of scheme was around when I went overseas. It would have been fantastic,” he says.

The help with the travel expenses and then the chance to work on a farm in the UK would have been ideal, he says.

The connections both Mason and Rawson could offer would be invaluable and then to know you could come back home to a job would have been a big plus.

Mason says there’s plenty of pluses for the company too.

“When young people come back from their OE they’re usually ready to settle down and get stuck in. They’ve got a better idea of where they want to be heading so hopefully they’ll be around for longer.”

A bit of sunshine for the winter

Terracostosa has not only teamed up with an overseas farming company to create opportunities for young people it’s also been teaming up closer to home to come up with new solutions for winter supplement.

“We used to buy maize from John but after the payout drop we stopped that.”

Last year the two were talking and Evans asked if there was anything he could grow for the dairy farms.

“I told him the only crop we really buy in now is straw to go with the fodder beet and if he could think of something that was a bit higher in protein that we could get minerals on and was still cost-effective we might be interested.”

Evans works closely with the Foundation for Arable Research (FAR) and after some inquiry he suggested they try two possibilities – Faba beans and sunflowers. So they agreed to field trial both and Evans put in five hectares of each.

“Once they were harvested we said we’d look at exactly what it cost to produce and how long it was in the ground and work out if it could be done at a price that would be fair to both of us.

“We needed to work out if either crop was going to be worth growing for them and for us.”

Mason says the sunflowers were sown in October and harvested in January and seemed to require limited pest control while the Faba beans were in the ground longer and needed more attention.

The sunflower crop was harvested and chopped for silage when the crop was flowering and before the seeds dried and hardened.

The Faba bean plants were harvested and chopped once the bean pods were full but before the crop had started to dry off.

Both crops were put into separate silage stacks and each has been tested for quality.

Mason says all the information is being collated and when they have all the results the two farmers will be able to decide whether either could become an option.

vamtam-theme-circle-post
 Category Country-Wide Young Country
Is there any reason to wait until you are a grown-up to run your own...
 Tags Young Blood
Read More

Search for the perfect udderRatio theory discredited