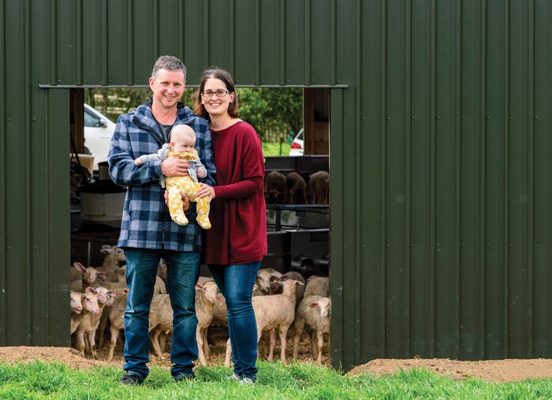 A passion for sheep, pasture and milking suggested sheep milking was a perfect fit for James Wallace. The South Auckland farmer, his wife Stacey and business partner are the first suppliers for Spring Sheep Milk Co. and they are fizzing with excitement being at the forefront of a new industry. Sheryl Haitana reports.

When NZ Dairy Exporter visited James and Stacey in Karaka there had been wild wind and heavy rain the night before. The ewes had mobbed together in the corner of their break fence, yet there was zero pugging and only a bit of squashed grass to show where the sheep had huddled in one spot for shelter.

“To have no pugging on our heavy soils is just one of the reasons why sheep milking will work for our farm,” James says.

“I think this is where the world is going. I’m adamant about that. The low environmental footprint is a biggy. It’s a lot more environmentally friendly.”

The industry is providing a pathway for dairy farmers to still obtain farm ownership and be profitable amongst incoming environmental regulations.

‘I see a lot of potential for young people to get into the industry. That’s why we are in it, we are here for the long term.’

“I see a lot of potential for young people to get into the industry. That’s why we are in it, we are here for the long term.”

The quality of sheep milk has many advantages and offers a great alternative to cow milk on the market, James adds.

“I personally think there is more of a future in milking sheep. The milk is more digestible, and it’s delicious.”

James grew up on a sheep and beef farm at Karaka, and then milked cows for 20 years. He followed the traditional dairy pathway, from farm assistant, through to manager, lower-order sharemilker, herd-owning sharemilking, and equity partner of a 1200-cow farm with Rangitata Dairies in the South Island.

He wanted to return to South Auckland so sold his share to buy a 60,000-head poultry farm at Karaka, which he and Stacey still own.

“It was a good opportunity to move home.”

A couple of years ago he read about sheep milking in the NZ Dairy Exporter and it sparked his interest. He attended a field day at Spring Sheep’s pilot farm in Cambridge and sat down to write some budgets.

“I wanted to get back into sheep, but with traditional sheep farming it is hard to get good returns.

“I’m passionate about sheep, milking and pasture, and this seemed to tick all the boxes.”

James and Stacey with their business partner signed up a 70-hectare lease farm at Karaka, converted the herringbone and started supplying their first milk to Spring Sheep this spring.

They are paying a competitive lease for the farm in competition with local vegetable growers and dairy farmers.

Their biggest capital expenditure was to convert the herringbone from a 16-aside cow farm dairy to a 30-aside sheep parlor, with individual stalls for the ewes. They also had to upgrade fences by adding a couple of extra wires.

James has also invested quite a bit in pasture renovation, planting several paddocks in Showgun, 8ha of chicory and plantain and is trialing 5ha of lucerne this year.

“We are very summer dry up here, so the chicory and plantain are working well. The lucerne is a bit unknown in this area.”

They bought 600 ewes from Spring Sheep – a high-yielding selection from their breeding programme.

James also invested in a purpose-built lamb shed on his parents’ farm and bought three Lely automatic feeders and a Heatwave Milk Warmer for colostrum.

The couple are in partnership with James’ parents Barry and Sandra Wallace on the 70ha property and are rearing all the lambs from the milking operation there.

James hopes to convert the rolling family farm to sheep milking within the next few years.

The transition from milking cows to milking sheep has gone well, with many similarities James says.

For anyone currently milking cows, a lot of the skills are transferrable and James would recommend the switch.

With sheep, farmers do have to be more on to it many aspects, when it comes to having better quality grass silage or trimming feet to keep on top of lameness, for example.

“You just have to be a bit more onto it with everything.”

Lambing started on August 10 and they were all done by September 20, with a 180% lambing, In comparison to cows, it was intense with 140-odd lambs coming on one particularly wet day in August.

“It was crazy, but it was over quick, I quite liked it.

“We check on the ewes about four or five times a day to look for any problems and tag the lambs as they are born. The ewes with multiples can get cast so it’s best to keep an eye on them.”

They leave the lambs with their mothers for 48 hours, except any triples or quadruplet lambs not getting fed are taken to the family farm for gold colostrum.

The remaining lambs are picked up after 48 hours and taken around to the family farm on a horse float to get another two days of colostrum then taught on the automatic feeders.

The lambs are lighter to pick up than calves, but they’re faster and there are more of them, so it got James fit.

“It was pretty entertaining to watch them running around trying to catch all the lambs,” says Stacey, a qualified nurse.

The mums follow the trailer along just like cows and come into the parlor for their first milking.

When it came to teaching the ewes to be milked, it’s gone a lot easier since they installed individual stalls.

James had initially used his own innovation and built a head bail system, but the ewes flow through a lot easier now.

“Since we installed the indexing stalls we’ve already knocked half an hour off our milking time.”

The milkings take three hours at the moment. Their automatic drop feeder is currently not working, so they’re feeding the 400g/sheep pellets by hand. Once that is up and working they will be able to drop from three people to two people in the parlor.

The sheep are very calm and quiet, they happily stay behind a two-wire break fence and come out of their paddock easily and run to get milked, he says.

They are easy going in the parlor and weren’t perturbed by strangers in the pit or at the front of the parlor during milking.

They’ve averaging 1.5 litres/sheep at the moment and are on target for well over 200L/sheep for the year.

A third of the mob are hoggets so production will improve with slightly older ewes next year, James says.

The stocking rate at the moment is 14/ha and James hopes to increase to 800 ewes next year. High-performing farms should be able to stock 20 ewes/ha.

The farm is modelled on the outdoor Spring Sheep’s farm at Tauwhare in the Waikato and James is having a friendly competition with farm manager Felicity Cameron on driving production.

“We are getting used to the farm now and bringing the sheep in. We’ve had a few teething issues, but next year we will be firing.”

It’s great to be able to call Felicity

and run ideas past her and see what’s working well on her farm, he says.

The sheep milk industry is being led well by a capable group of people, from the farm managers to the people behind the scenes in the office who are all working together.

“It’s exciting to be part of the sheep dairy industry. We’re learning things along the way. There is no handbook, so we are writing the book.”

He takes a lot of confidence from the team at Spring Sheep.

“We’ve had a lot of support from them, I couldn’t be happier. Some of their staff have been here with their gumboots on during lambing helping us out. It feels like a big family, they welcome you in and they just want you to succeed.”