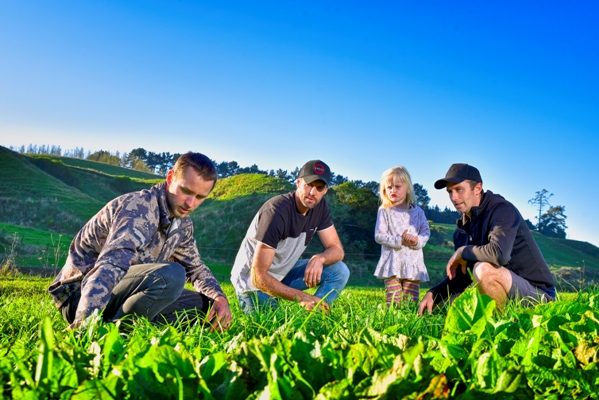 The Armstrong family is an example of the younger generation in New Zealand who are keen to farm organically and look after the environment, Fonterra organic supply manager Stuart Luxton says.

The Armstrongs are aware of the public perception of dairy farming and want to lower their environmental footprint, he says.

“They’re more concerned with the long term, and actually we can do this better and still make money.”

The dairy industry is going down the path of farmers potentially being told what they can and can’t do.

Farmers converting to organic are the ones who want to be ahead of the curve, rather than being told what to do. Data shows organic farming is more environmentally friendly and easier on the environment, he says.

Organics can therefore provide a sustainable business among the growing environmental pressures and regulations.

‘Nitrogen leaching is a classic one – on a bell curve, organic farmers will generally be at the bottom end of that bell curve.’

Stuart, who previously worked for Ballance Agri-Nutrients and as an area manager for Fonterra before joining the organic team six years ago, says over time there is potentially an advantage for organics in light of these environmental challenges.

Incoming regulations will impact farmers who have the biggest environmental footprint and won’t impact organic farmers as much, he says.

“Nitrogen leaching is a classic one – on a bell curve, organic farmers will generally be at the bottom end of that bell curve.”

Organic farmers are also farming differently – using diverse pastures and generally on a longer round, which means more carbon sequestration in the soil – especially compared to farmers who are cropping a lot or using chemical fertilisers, he says.

There is growing interest from dairy farmers in converting to organic, and Fonterra want even more inquiries to meet increasing demand.

The Fonterra organic business is targeting one million kg milksolids growth in supply each year, which they have met easily in recent years.

Almost 100 suppliers are signed up with the co-operative, from small farms of 40 cows to 700-cow operations.

“Potentially we could grow faster, but we have learnt some hard lessons in the past. The customer demand there right now, by the time a whole lot of milk comes on stream in three years’ time, may not be there. So we are taking in a more cautious strategy of growing.”

There is a growing global demand for food that is antibiotic free and chemical residue free and there is demand for specific products that Fonterra make that other NZ  organic businesses can’t do.

“There is also a strong demand for the story that we tell, which differentiates us from other organic businesses in the world.”

Getting customers to buy Fonterra organic ingredients that is then listed on their packaging locks them into continued supply from Fonterra.

It takes three years to become accredited to meet the United States organic market standards, which Fonterra requires from suppliers.

There is often more cost and potentially less production during the process of becoming organic, so Fonterra pays a conversion incentive of 45c/kg MS during those three years. Fonterra are looking to increase the incentive payout for the third year, once the farms meet the European Union organic standards, Stuart says.

For credited farmers, the Fonterra organic milk price has averaged $8.21 for the last three seasons.

Organic suppliers are still restricted to the North Island. Fonterra picks up organic milk from Whangarei, down to Opotiki, Hawke’s Bay, Wairarapa, Taranaki and Manawatu.
Farmers are not charged extra for their distance from a factory, with all farmers paid the same milk price.

The biggest cost in converting to organics is often around production drop, but that depends on where the farm starts, Stuart says.

A low-input farm to start with won’t change its milk production much at all, compared to a high-input farm dropping to a lower-input system.

For farmers interested in converting
to organic, the biggest challenge is ensuring they can secure organic supplement and grazing for their youngstock, Stuart says.

“I say to farmers ‘It’s up to me’ – I’ve got to make sure I can meet my animals’ demands going forward’.”

The other challenge is around managing somatic cell counts (SCC), which can be done through herd testing and culling cows with high SCC.

Reducing the stress on cows, giving them a healthy diet and ensuring their environment is clean and comfortable is also key to less mastitis, he says.

“Organics is very much around preventative – rather than the ambulance at the bottom of the cliff.

Fonterra is also working toward having more certified organic products listed so farmers are aware of what they can use.

There is more paperwork to complete as an organic supplier, but that is part of assuring the customers of the organic products, for which they get paid a premium. All decisions onfarm need to be approved by the certifier before buying it and using it onfarm to ensure the operation meets organic standards.

Consultants can offer support and help farmers to go through the process and set up their farm as organic.

For farmers interested in hearing more there will be organics discussion groups held later in the year.
• More? visit www.dairynz.co.nz