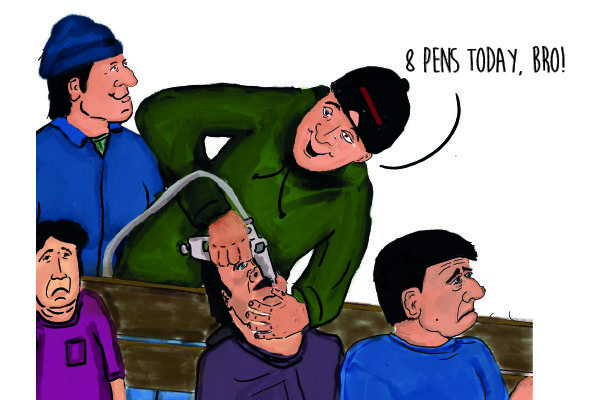 When Monash University announced that ivermectin was a possible treatment for Covid-19, the world collectively chuckled.

Farmers wet their stubby shorts with laughter and checked the labels on their drench containers.

The urban mums and dads, mostly unaware that ivermectin is also used as an endectocide for livestock, sniggered that their child’s head lice treatment might hold hidden powers. A few armchair commentators rolled their eyes in a “scientists will study anything” kind of way.

But as amusing as it might be, it makes perfect sense to call ivermectin into the room when auditioning for a medical hero. Ivermectin is most widely recognised as a thing that fries parasites because that is the role it was born to play.

Ivermectin came about in the 1970’s when a microbiologist discovered a previously unknown species of Streptomyces bacteria (eventually named Streptomyces avermitilis) in a Japanese golf course.

It looked interesting and was shipped off to Merck where weird and wonderful Streptomyces strains were being tested for antiparasitic effects. Again, not a strange action to consider since two-thirds of the naturally sourced antibiotics come from Streptomyces types of bacteria.

It was worth the effort, poking and prodding the little Streptomyces avermitilis bacteria gave rise to the avermectin family of medications. Basically all the ‘mectins found in your animal health cabinet (e.g. ivermectin, moxidectin, abamectin, etc). It also earned its loyal researchers a Nobel Prize in 2015.

Ivermectin took off as a veterinary treatment for internal and external parasites. In fact it was, and may still be, the leading animal health product sold worldwide. With ivermectin’s research debts well and truly paid through veterinary purchases, Merck has literally given ivermectin away for human use.

Billions and billions of doses of ivermectin have been donated by the company over the past 30 years via the ‘Mectizan Donation Program’. This is used to treat parasites in humans to prevent diseases like river-blindness and elephantiasis. The names of these conditions are fairly self-explanatory, one makes you blind and the other makes you swell up till your limbs look like that of an elephant.

Once a drug has been proven safe for human treatment, then it is good science to explore what else it can do. At low concentrations ivermectin paralyses parasites by turning on their chloride channels – think of these as tiny pumps that dump all the salt out of the parasite’s cells.

At high doses, ivermectin seems to be able to do the same to human cells, which is more useful than it may sound. High-dose ivermectin has shown promise as a treatment for overactive muscles (muscle spasticity) in people with spinal cord injuries and also for killing leuksemia cells (a type of blood cancer).

At high doses in the lab, ivermectin can also conquer viruses. It first came to the attention of virologists nearly a decade ago when it showed promising results against HIV. It is worth stopping to break that statement down.

The fast mutation rate of the HIV virus means that there are already some strains of HIV that are resistant to current treatment.

This means that researchers must continue to explore all possible HIV treatments as a backup. Viruses on their own are meek. Unlike bacteria, viruses cannot replicate by themselves so they do not “grow” outside of their host.

To make baby viruses, a virus must hijack the machinery of its host cell. In a petri dish, ivermectin was able to interrupt the machinery that HIV uses to hijack the hosts cell’s DNA thus preventing viral replication. Thankfully, these pathways are common between different types of viruses which means that one antiviral treatment may be repurposed for different viruses.

Here, a single oral dose of ivermectin was able to reduce the level of viral proteins in the blood, although clinical benefits were underwhelming. As a bonus it will probably kill any pesky mosquitos lining up to spread the dengue fever. During malaria clinical trials, ivermectin has also been shown to reduce malaria transmission by flattening the mosquitos that bit the ivermectin-treated malaria patients.

So now that we have taken a trip through ivermectin’s work experience, we can respect that it is not so kooky to consider it as a Covid-19 treatment. What happens next for our plucky little hero? Well it has to be said that the doses used in the petri dish at Monash University were particularly high, way higher than the FDA would feel comfortable pumping into a human being.

As we have seen with Dengue fever trials, giving humans safe levels of ivermectin does something against Dengue fever, but not enough to help with critical cases which is where treatment is needed the most.

This may also be the case if ivermectin reaches clinical trials for Covid-19. The Mectizan programme has been donating ivermectin for humans for decades, but they don’t seem so convinced there is anything to write home about. The NZ Ministry of Health has also been quick to downplay the ivermectin vs Covid-19 research. It has to be said, though, that the primary motivation of these groups at this point is to prevent the public from overdosing on sheep drench and head lice medicine.

The science community will give ivermectin a ‘looksy’, and if they think it is worth proceeding, then it will be given to some Covid-19 patients or at-risk health care workers as part of a clinical trial. There are a lot of other Covid-19 treatments being trialled at the moment.

You may have heard Donald Trump enthusiastically backing hydroxychloroquine which is usually used to treat malaria. The antiviral, lopinavir-ritonavir, used to manage HIV, is also getting plenty of airtime. Perhaps, by the time you are reading this, there has been a breakthrough.