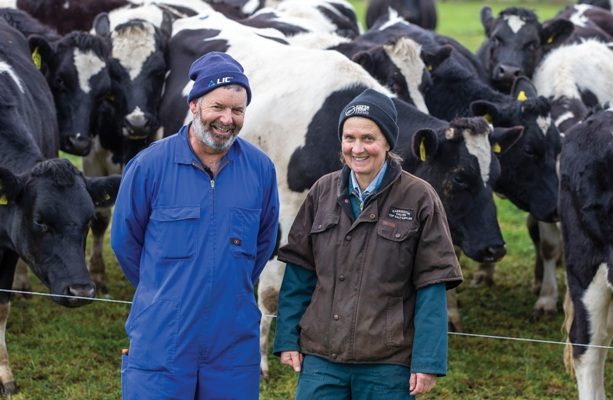 George and Sharon Moss are disappointed with the blow to their environmental footprint last season and are strategising to ready their farm business to face the challenges that lie ahead. Sheryl Haitana reports.

George Moss proudly confesses to trying to continually improve their environmental footprint through on-going tweaking of their Tokoroa dairy businesses, but admits this has been harder than he and Sharon anticipated due to the inevitable ‘creep’ that comes from chasing the extra milk and last bit of profit.

Analysis of the numbers highlight just how challenging continual improvement can be and that despite relatively low stocking rates and increased use of best practices, the numbers on one hand are disappointing, but on the other hand they identify where the opportunities lie after improvement.

“We are increasingly of the view that for us a structural shift with defined changes are going to be more effective than the tweaks on their own,” he says.

Even with the best intentions and best practices, he is disappointed with how much palm kernel they had to feed during a very dry Waikato autumn this year.

“We blew out. I’m not proud of what we had to do. Up until January we were doing very well with less purchased feeds and less nitrogen used, but we had the hard autumn and we exacerbated our nitrogen loss with suboptimal application of nitrogen and fed a lot more palm kernel.

“It will blow our footprint to bits, and it will have to change. We have been trying to get incremental gains through efficiencies, but we now believe that a structural change might be more effective.”

The farm used 1.7 tonnes per hectare of palm kernel, about the same as last year because the poor spring and 0.8t more than 2014-15 season.

‘I’m not proud of what we had to do. Up until January we were doing very well with less purchased feeds and less nitrogen used, but we had the hard autumn and we exacerbated our nitrogen loss with suboptimal application of nitrogen and fed a lot more palm kernel.’

“This figure in isolation is misleading as we used large amounts of spring-made silage to maintain milk production through February and March. A further 0.8t/ha of palm kernel will be used for winter feed.” This was part of managing the FEI index.

“As palm kernel has crept up, we appear to offset any gains we have made in footprint elsewhere.”

It was less than ideal behaviour, but they needed to set up both the cows and pastures for next season, and limit any damage to that season, he says.

Both farms still dried off a month early, and each lost about 10,000kg milksolids (MS) in production because of the dry. Without the extra supplement that result would have been far worse and could have compromised the following season.

George was disappointed to see their DairyNZ partnership farm had a relatively high greenhouse gas (GHG) emissions at 13.24t/ha for the 16/17 season, given the lower than average stocking rate at 2.6 cows/ha. The moderately high per hectare performance through high per cow production drove that number. “GHGs and production per hectare are strongly linked,” he says.

“I was negatively surprised at how high our GHG were on our farm and I need to verify the indicated drop for the 17/18 season because it is counter intuitive.”

Dairy farming is impacted significantly by weather and some years, like this year, farmers are going to have to make decisions that don’t fit within their normal business operation. They need that flexibility to look after animal welfare and their bottom line.

Any legislation for onfarm environmental impacts, whether it is to reduce greenhouse gases or nitrogen leaching, the policies need to be based on a long-term average of say three to five years because of the seasonal pressures and variances on farm and farmers, George says.

“It’s about how we keep reducing our long-term average. With increasing climate variability, we are going to have some spikes (in seasonal conditions).”

Albeit, George and Sharon know they will need to at least continually tweak their business model to reduce their environmental footprint to achieve an ever-improving trend into the future.

“We need another approach and our nitrogen loss figure needs to be and can be improved.

“We need to aim to maintain NZ’s low footprint per unit of production but also continue to improve our absolute footprint.” 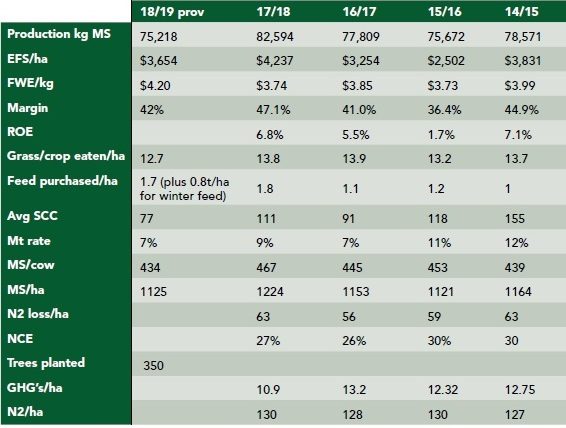 The couple will be planting a significant number more trees on both their dairy platforms this year and in the years to come and have set a 10% reduction in nitrogen use and nitrogen loss across both dairy farms.

George and Sharon have been milking cows 10 minutes from Tokoroa for the last 25 years on their Pukerua Farm. They bought the Tokoroa Pastoral Farm in 2008, which is a model farm with DairyNZ to monitor GHG impacts.

They own an additional block of land that lies attached to both milking platforms, where they run their yearlings from May for 12 months, along with about 40 dairy beef animals.

They lease out 7ha of the block to the local forestry nursery which is used to grow pine tree seedlings.

Sharon runs the Pukerua Farm with a 2IC, while George oversees the farm managers on Tokoroa Pastoral. While Sharon is happy to continue farming fulltime for the foreseeable future. George’s passion has shifted to how to get their business to meet the incoming challenges in the dairy industry.

They have written more comprehensive business plans for both dairy farms which encompasses goals and strategies for debt reduction, animal welfare, supplement use, fertiliser use, environmental goals, staff retention and succession.

The business plan objective is to continually improve both net profit and reduce environmental impacts.

Farmers don’t do business strategy naturally, but they need to think what the future is going to look like and mould their businesses accordingly, he says.

“Doing the big strategic stuff is not why people farm, and it takes a lot of work, but the world requires us to do it. Family farms need to think like corporate farms, they have to allocate the time and energy to do it.”
One of his plans is to drop 15 cows either this season or next to meet a lower stocking rate and reduce the need to buy in supplements.

“To tell you the absolute truth, we are grappling with whether we evolve slowly or make a quantum shift.”

Dropping cow numbers in one season rather than slowly over the next five years, is a step change rather than a slide – ending up at the same place. But they feel it’s the right thing to do it now, he says.

“To be clear, I’m not saying this is what other farmers should be doing.

“But it is important that farmers understand their numbers and model alternatives that work for them, collectively we can crack this conundrum of profitably increasing low footprint milk. As an industry we are already good, but we do need to refine further.”

Part of their policy is to also focus on breeding the most efficient animals they can. They are planning on using sexed semen over their top cows this season and rearing fewer replacements.

A large percentage of the herd will be bred to a beef breed, with the beef calves contracted to be bought at 10-days old.

“We are chasing the most efficient animals. I think genetics are a large part of the (environmental) solution.”

One of their environmental goals in the business plan is to reduce nitrogen fertiliser by 10kg/ha every year and reduce their leaching to 45kg N/ha by 2025.

“Our pumice soil is a challenge to limiting nutrient leaching. Nitrogen is our Achilles heel, and how we manage the timing of our nitrogen application. The goal is to slowly reduce the amount of nitrogen fertiliser and improve substantially our nitrogen conversion efficiency.”

They now soil test their whole farm biannually to be more accurate with fertiliser requirements and application aiming to get the right fertiliser in the right place at the right time.

THE REWARDS FOR BEING GREEN

Farmers can be leaders in the environmental space and the rewards will come down the road, George believes.

“I think there is going to be gold at the end of the tunnel. But we’ll have to dig for it.”

Farmers can voluntarily reduce their environmental impact in their farm businesses because it’s the right thing to do, or they can be pushed through regulation in the future.

Ideally, George hopes farmers will do it because it is the right thing to do.

There is some concern amongst farmers that if they move too quickly and decrease stocking rate and nitrogen fertiliser then they might get penalised down the track when regulation comes in.

“But if you genuinely believe that something is right, then you shouldn’t feel bad if you’re a little bit disadvantaged.”

New Zealanders all need to work together to solve the issue of climate change and dairy farmers can lead the way, he says.

“If we polarise ourselves into left and right, we will not solve this thing.”

Climate change can’t be fixed in a three-year term, or a nine-year term. New Zealand needs to come together to plan and achieve it, he says.

Being defensive or pointing fingers at our urban cousins or other industries is not going to help either.

“You can’t take the defensive position. That’s saying we are only as good as we will ever be.”

Dairy farmers will not defeat the trend towards sustainability and if they try to fight it they will lose in the marketplace, he says.

While some tough measures are being put in place such as the Zero Carbon Bill, the reality is that NZ will never chuck out the baby with the bath water.

Any NZ government will want to maintain the strength of NZ agriculture and its contribution to the economy, he says.

“The reality is I think we will have a measured approach. Are we going to gut this nation? No.”

The dairy industry will innovate and adapt, and dairy products will continue to hold a valuable place in NZ exports.

“Ruminants have the ability to eat huge amounts of low-nutrient feed and turn it into a nutrient-dense product and nutrient density is going to become huge in the future.”

One of the Mega Trends of today is that the population is concerned about the environment and they want to feel ‘guilt-free’ when they purchase dairy products off the shelf.

People want to be assured when they are buying dairy products that they are have the lowest environmental impact possible, he says.

That’s the goal for NZ dairy farmers – to fill that space on the shelves.

The assumption is that if NZ got rid of dairy cows it would solve the environmental issues, but the reality is all industries, including horticulture, have a footprint.