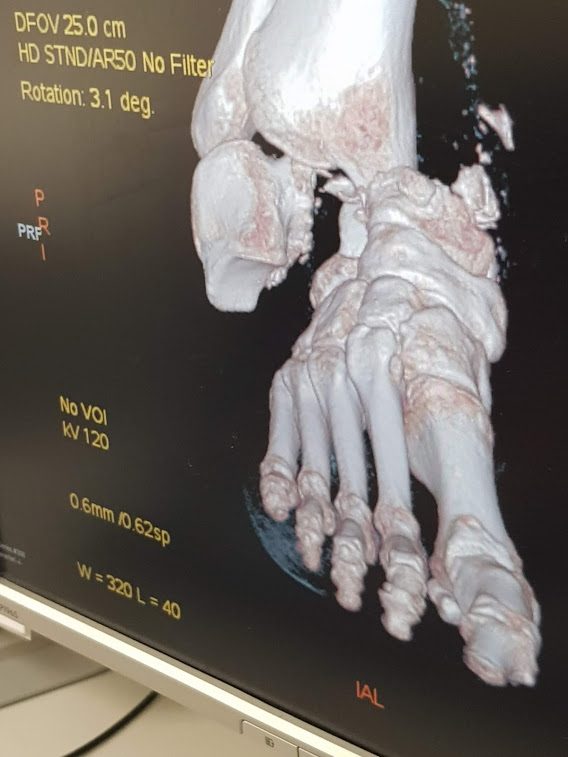 The May edition of Country-Wide featured Northland farmer Chris Biddles’ account of his nasty accident with a quad bike. He brings us up to date with his recovery progress.

Physio said, “get out on the farm and test your foot on uneven ground”. Orthopaedics said “try different stuff but listen to your body”. My family said “you’re a f…..g bad listener”.

I admired Country Wide for putting in some pretty ugly photos of me and my injuries. They were meant to shock people and from all accounts they have.

A guy introduced himself to me at Alistair and Pat Sharpe’s bull sale then introduced me to his wife by saying “this is the guy whose photos made you vomit”.

I am not lecturing on the safety of quads. I am trying to get farmers to be aware they may make bad decisions on their quad because of their mental state.

I made a super dumb decision on my quad because I was extremely fatigued and my brain was not operating as it needed to be. In my mind I just needed another couple of long days and I would have the farm ready to operate without me for eight weeks while I recovered from my scheduled full knee replacement.

The farm did operate without me but for much longer than six weeks and with increased labour, which is still pretty much the case. Unfortunately, I still have my buggered knee.

Friday, February 1, 12.30pm quad goes end over end downhill, I am catapulted off landing on right shoulder and back bars of quad land on my right ankle.

A 30-metre drag with one hand and one leg to higher ground and a mayday is called on radio.

3.30pm I land by helicopter at Whangarei base hospital.

March 6, further surgery to remove external fixtures and put leg in a cast.

In April the cast was removed and replaced with a Moon Boot but I remained non-weight-bearing.

The beginning of May I was allowed to begin weight-bearing and attempt to start walking again. This was a fantastic exercise in testing pain tolerance. By the end of May I had discarded the wheelchair and by mid-June I was 50% on crutches and 50% without.

From mid-March I have been undergoing some very intense physio on my right shoulder and from early May on my right leg and ankle. This continues.

In early July I was encouraged to go out on the farm and try things. A month on, I am out and about most days, mostly advising but I do some jobs extremely slowly and often quite painfully.

Each step has to be watched as uneven ground is very painful. If I spend a couple of consecutive part days onfarm with quite a bit of walking I am often unable to walk at nights and am back on crutches.

I always knew it was going to be a marathon not a sprint. Most days there is some improvement, and certainly when you look at the scan of my ankle from day one then I am fortunate to be walking.

In May I had three days in Palmerston North at the Angus National bull sale. I travelled on my own in the wheelchair. Air New Zealand was fantastic as were my friends who helped at the sale and functions.

I was back there a month later on crutches for Forbes Cameron’s sale and also managed to drive to Rotoiti in mid-June for some unproductive trout fishing.

Onfarm (early August) we are a month into calving. We have 200 of our 260 stud cows calved, our bull sale catalogue is at the printers and we are trying to find some grass to feed everything. We have had a very ordinary winter that followed a very ordinary autumn. We are nearly 200mm below our yearly average rainfall. The bulls are looking okay ready for our sale on September 4.

I survived where others have died or been paralysed. Please, farmers, do not make my mistake. Be aware of fatigue and the consequences of bad decision-making that result from fatigue.