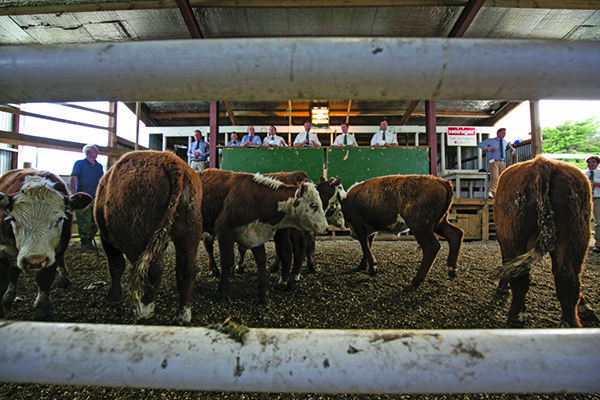 The success of those sales means the service will be rolled out nationwide in the near future and sheep added in due course, New Zealand Farmers Livestock general manager, Bill Sweeney, told Country-Wide.

It could also become available through other companies if they take up NZFL’s invitation to them to use the service for a modest fee, he says.

“We’ve already emailed the other companies inviting them to put their cattle through the platform but at this stage none have taken the opportunity.”

Initial sales at Frankton, Stratford, and Te Kuiti achieved near full clearance, a marked contrast to the PGG Wrightson-owned online-only platform Bidr which Sweeney estimates cleared less than a third of store stock offered during the Covid-19 lockdown.

“We’re adamant saleyards are a necessity for the New Zealand farmer; always have been, and always will be.”

Sweeney says online bidding through NZFL’s MyLivestock live auction in tandem with bids from buyers ringside means vendors’ stock reaches a wider market. Some lines from the initial sales went to buyers beyond the usual catchment for those saleyards.

“From Frankton we had cattle go to Taranaki and from Te Kuiti some went to Whanganui.”

That greater geographical reach could prove particularly helpful in times of drought, making it easier for buyers from regions with feed to access cattle in areas where it is short, and in turn, for vendors needing to offload stock quickly to do so. Indeed, part of the motivation for fast-tracking the service during the Covid-19 lockdown was because other online sales channels and paddock sales weren’t getting the numbers moved that needed to be.

The absence of saleyard auctions also meant there was a lack of true market price discovery, which was why NZFL resumed sales as soon as Level 3 was introduced.

While inter-regional trade from saleyards has always been possible, in the past it’s required either long distance travel for the potential buyer to attend in person, with all the time, cost and uncertainty of success that incurs, or engaging a buying agent.
Sweeney says online participation also facilitates bidding in multiple sales at different locations on the same day, and buyers can be confident in stock weights because saleyards have certified scales.

Sale catalogues go online several days before sales and are updated with last minute changes as necessary. During a sale, remote bidders can view three camera angles: two on the livestock as they go through the ring, and one on the rostrum. Bids take less than a second to go from a remote buyer’s screen to an auctioneer’s screen on-site, at which point the auctioneer calls “bid!” as per normal.

Sweeney says auctioneers should be making it clear it’s an online bid too, by calling “online”, in the same way as they might clarify where in the gallery an on-site bid came from.

The system has cost a considerable amount to develop, particularly as they worked “night and day” to bring its launch forward due to the Covid-19 lockdown and drought pressure.

However, Sweeney says NZFL isn’t increasing vendor commission for hybrid sales, nor is there a fee to register as a buyer.
Rather, it’s hoped the extra service will increase NZFL’s clientele (an NZFL account number is required to access the Live Auction portal) and stock throughput so a return on the investment will be generated that way. A permanent bidder number is generated the first time the Live Auction portal is accessed which can then be used online at all subsequent MyLivestock live auctions, regardless of location.

Besides offering hybrid cattle auctions at the other saleyards where NZFL operates, including South Island locations, Sweeney says future developments could include adding a pre-sale video of cattle lines, perhaps with commentary, and sheep sales.

The nature of sheep sales will require a roving camera to relay shots of auctioneers, and the stock offered, as the sale progresses pen to pen, he notes.

vamtam-theme-circle-post
 Category Country-Wide
Being the husband of a farmer’s wife has taught Paul Burt some valuable lessons. Thankfully,...
Read More

“My Dogs Are My Legs”Virtual fencing for real