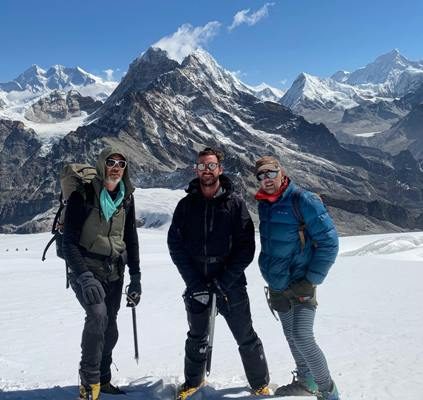 Last October, I was having a busier day than normal, when I received a call from my neighbour; would I like to go to Nepal? The plan was to ascend an easy peak. Saying no was not really an option, so I joined a group of mostly rural and middle-aged blokes from South Canterbury and we spent May trekking in and climbing Mount Mera.

Mount Mera does not require any great climbing skill, but it is high altitude and cold. The air is thin at 6500 metres and you do not move fast enough to generate much body warmth when climbing in the dark. We arrived at the top at about the same time as the sun and had great views of the big peaks; Makalu, Ama Dablam, Kanchenjunga, Cho Oyu, Lhotse and Everest.

Our group of nine Kiwis was guided by four Sherpas and we had six porters carrying the gear. Each porter was carrying about 35kg on a strap over the forehead. It is quite humbling to see these guys handle heavy loads. None of them are big men and they must have looked at us and thought we were a bit useless.

The real pleasure of a trip to Nepal does not come from climbing mountains, but rather from the people, the land, vegetation and the wildlife.

We were trekking for two weeks, gaining height and fitness and also acclimatising to the altitude. Our days walking were punctuated with regular cups of tea at a trail side tea house and evenings were at a village. At the lower altitudes, the land was intensively cultivated. The steep hillsides were terraced and growing potatoes, barley, wheat, maize, onions, garlic, mustard and buckwheat.

Each house had a greenhouse to supply greens. The fertility was supplied by compost and the nearby forest was important. You could see old grannies hauling basket-loads of dry leaves to be used for animal bedding and subsequent composting. The forest was providing forage for the animals and was cut and carried. Obviously, animal manure was very important, but I didn’t see any sign of human waste being used.
All the crops looked very good and no sign of any ’cides.

One of our Sherpas was anxious to get home and help his wife with the wheat harvest before the monsoon arrived in early June. When asked how much land his family had, he replied that two oxen could plough it in two days, so I guess around half a hectare.

Remote villages are supplied by pack trains of donkeys but there is a programme of road building going on and we met the diggers at one village. The scarred hillsides are very evident and visible for miles.

Highlights came from the daily interaction with local people and seeing the homes of our Sherpas and meeting their families. Some noteworthy happenings were:

Nepal is quite a poor country with an average per head income of US$1000 a year. After trekking for three weeks on a no-meat diet and seeing the Nepalese struggle to produce food, I was struck by our good fortune in New Zealand.

We have a variety and abundance of food and we have been freed from the drudgery of having to grow it ourselves. We have such an abundance of land and we don’t always use it wisely.

If you fancy a trip to Nepal, contact Koru Mountains.