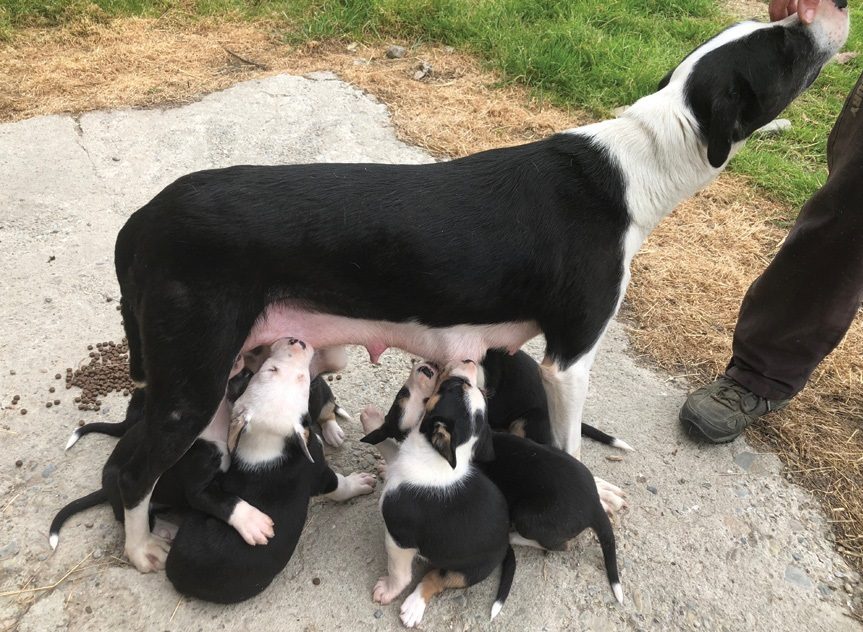 Nutrition before and after whelping

During the first month of pregnancy a bitch can be maintained on her normal diet. During the second month, she should transition on to a good quality puppy food, or there are some specially formulated pregnancy and lactation foods available (ask at your local vet clinic).

These foods have everything required in her diet during pregnancy and lactation, so there is no need to supplement her meals. In this second month, food intake will also need to increase by 30-40% and she will need to eat two or three smaller meals a day as her stomach capacity reduces and her nutritional requirements increase.

After whelping, the bitch will need to eat about three times her normal intake to have enough energy for milk production. Food should be available at all times until the puppies are weaned.

Knowing the whelping due date is important. Whelping occurs about 63 days from the first mating (put it in your calendar). There are three stages of labour:

The placenta is expelled about 10 minutes after the birth of each pup, these are usually eaten by the mother so it can be hard to count the number of placenta (this is usually done to ensure none are retained, but it can be difficult).

When to intervene during whelping

I am often asked how to train the progeny of a huntaway-heading cross, or as it is referred to a Shandy x Gaff.

First, I believe such breeding should never be considered a good option, although mistakes do happen. It is a total mismatch of genetics and the failure rate is considerable. Sure some do work and they can be very capable work dogs, but most of the resulting offspring will end up as statistics which is not responsible breeding.

However, if they do exhibit a desire to work stock then you would be best to train them according to which breed characteristics they demonstrate – either heading or huntaway. As always good compliance to the “Wayleggo” and “Stop” commands will ensure you have control of your dog.

A lot of this information has been sourced from Your Working Dog’s Health, compiled by Lisa Hamilton, Vet Tech, which I highly recommend. The book is available from Atkinson & Associates Veterinary Services, Piopio. $10 per copy including GST. Postage extra.

vamtam-theme-circle-post
 Category Subscriber - Dairy Exporter Young Country
An environmental advisor is impressed with how much Southland farmers have achieved, some without even...
 Tags Work Hard
Read More