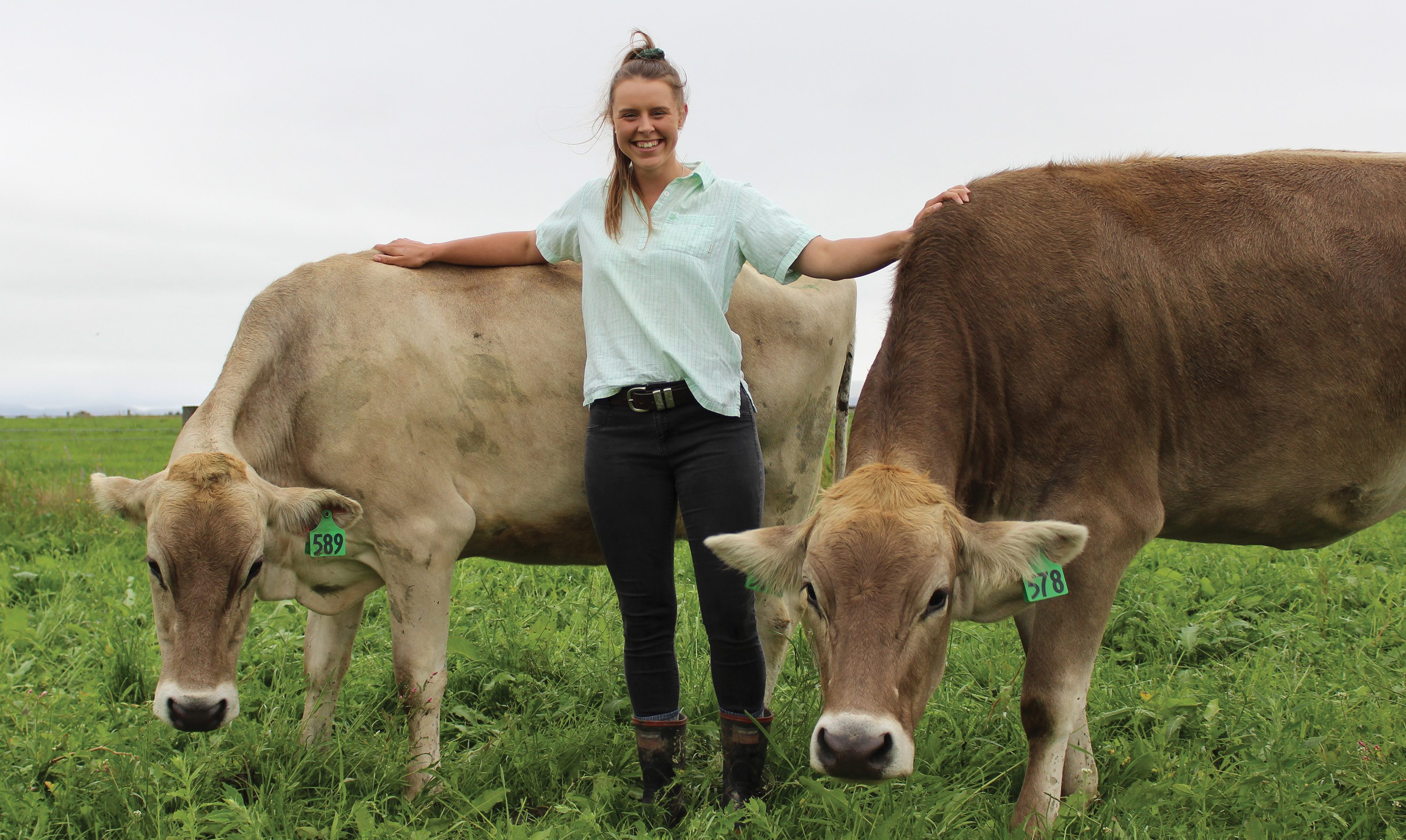 Working on a dairy farm is not what Paige Harris thought she would be doing after university but now it’s exactly where she wants to be.

Milking 550 cows on 310 hectares near Balfour in northern Southland, the 24-year-old says she is still only “scratching the surface” of dairying.

“All my friends and family were saying ‘what are you doing milking cows with a first-class honours degree’ but if I really want to connect with farmers, I need to understand the role and the only way to do that is by milking.

“You need a lot of tools in the toolbox to really achieve at dairying.”

The Invercargill daughter of an agricultural engineering dad and a motelier mum, Paige always loved animals and had hoped to apply for the veterinarian course at Massey University after studying sciences and agriculture at high school.

‘I can’t think of a more honourable job than producing food for the world.’

“But Palmerston North is a long way from home and I had no support people there. I’d rarely been to the North Island and if I didn’t make it into the course, which back then was highly competitive, what would I have done?”

Instead she fell in love with the Lincoln University campus and, with the university’s Future Leaders Scholarship for the three years of a Bachelor of Agricultural Science degree, the decision was made.

“I’d also picked up a netball sports scholarship there but I couldn’t do both so I did Future Leaders which meant I could still do the netball programme at Lincoln.”

She did a fourth year, honours, with a DairyNZ scholarship.

“I didn’t intend to go for the DairyNZ scholarship. I had just really enjoyed working on dairy farms at Otautau in the summer holidays as part of the degree.”

(Her work experience on a sheep farm gave her a black eye over Christmas after her first attempt at crutching lambs.)

“Everyone said Susan Stokes, who looks after the scholarship, was the person to talk to if you wanted to go dairying.

“I hunted her out and she proved to be the queen of advice and connecting you with people. I still keep in touch with her.”

Susan introduced Paige to DairyNZ senior scientist Dawn Dalley and she worked with Dawn at the Southern Dairy Hub. Her university honours paper was on feeding R1 heifers on either fodder beet or kale at the hub.

“Dawn really opened my eyes to the science of dairying and the mentorship Susan gave me was fantastic.”

And although she didn’t intend to go “hectare hunting” at Lincoln, her partner is former fellow student Nick Blom.

“He invited me down to the family farm at Balfour and then he said we had to go look at the other farm and there ended up being three here. I didn’t know.”

Nick’s parents are Art and Helen Blom who also own a mussel farm in the Marlborough Sounds.

Their three dairy farms are all within 10 minutes’ drive of each other and between them milk about 1500 cows on 700ha plus lease land. Nick manages one of the dairy farms with Paige farm assistant on another.

She had intended to specialise in off-farm work within the industry after milking for several years but now the two of them are looking at the next step together.

She’s identified they need to know more about financial literacy and people management and has found a diploma course at SIT (Southern Institute of Technology) covering both for this year.

“There are still a lot of things I can’t do onfarm like plough a paddock. Operating machinery isn’t me. I love milking cows and love rearing calves. The cows all have such quirky personalities.

“Which is one of the reasons why Nick and I are a good team because he does the things I’m not good at.

“The best date-nights are us hanging out with the cows in the paddock.”

Also on her to-do list is getting more young people excited about farming.

“I want to try to turn the narrative around and help educate people about what happens on dairy farms.

“I’m a dairy farmer with an urban background so I understand both sides and there are so many opportunities for young people in farming.

“I can’t think of a more honourable job than producing food for the world.”

And it is calf rearing that she excels in. A winter holiday last year took Nick and Paige to several large-scale calf feeding operations in the North Island where they looked at different feeding regimes. At calving they adopted the one they liked – once-a-day feeding which also gave Paige more time to get back to milking cows.

“When the calves are in their groups of 20, when they’re about 10 to 14 days old, we slowly transitioned them to once-a-day using lots of electrolytes and a probiotic.

“We got them drinking seven litres each a day at one go with no issues. We weaned two weeks earlier than usual, weren’t taking any milk out of the vat, it was all stored colostrum, and we think they were the best calves the farm has raised.”

Helping the young couple is the northern Southland community which is a mix of dairy, sheep and beef, cropping as well as deer farms.

“You can drive up almost any driveway here and ask for advice and everyone was so happy that Nick had come home to the family farm.

As well as going to Dairy Women’s Network events, Paige is also a member of the Balfour Young Farmers Club which has been re-established after former members aged out.

“We had a first meeting to see if there were enough people interested and 50 people came. And then the next month 50 people came again so we had to get a committee sorted.

Nick is chair of the club and Paige, after being on too-many-to-mention club committees at Lincoln, is happy to support him.

“I kind of ended up being camp mum at Lincoln. Coming from a motel background I know how to make a bed and can get any stain out of any piece of fabric!”

She said her childhood also helped her with getting work done when it needed to be done.

“Working in a motel is a bit like dairy farming. You don’t have holidays just because it’s Christmas or it’s summer. We learnt the value of a dollar early on.”

She said her family now, after their initial concerns, were supportive.

“Grandma brings out baking at calving and Mum and Dad will come to see the animals. Dad will bring the welder out to fix something.”

Her younger sister has also followed her to Lincoln where she is doing the Bachelor of Agribusiness and Food Marketing degree.

“I used to remember them being so tough but they’re a great team. It’s really good competitive netball and Nick can usually drive me there, which is great if I’m tired, because he plays ice hockey and the rink is right next to the courts in Gore.

“Playing netball really energises me and it’s nice to go somewhere and not talk about cows, even though the girls will give me a hard time if I’ve missed washing off some cow shit on my ear!”

vamtam-theme-circle-post
 Category Dairy Exporter
Busy farmer Frances Coles has a hope for Matariki, to ease the load. Have you...
 Tags Dairy Exporter June 2022, Milking Platform
Read More

Train your team to tell you when they are sickFuture’s on the farm