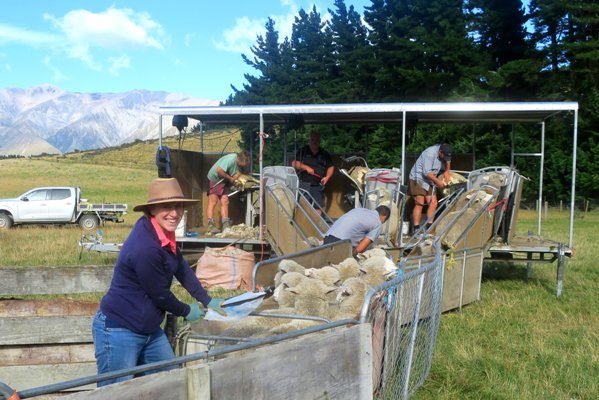 At the risk of raising my head above the parapet, summer turned out to be a blinder. Just as December’s blistering heat and wind was threatening near wipe-out of barely germinated winter feed crops, it rained. And it rained, and rained.

My dearly departed crop-farming grandmother used to confidently predict summer rainfall of “an inch a week” with a nod of the head as though she’d enjoyed this all her life. Aided by the fact she also told me, the somewhat wilding tomboy, that I ought to brush my hair three times a day, I clocked this yarn up as one of her fairy tales.

But now I am left wondering as, give or take a few days, this is what we averaged for six weeks over summer. It would seem Southland and Canterbury switched summers.

Patches of cultivated paddocks still look like December got the better of them, but the rest joined the clover revelling in a second spring throughout January.

I’m left wondering what my grandmother’s assuring predictions were for after such a summer, but that is not the only topic I’d like to hear her opinion on. What interesting times we live in.

As a 35-year-old ex-banking sheep farmer taking over the family farm alongside my husband and young family, I feel I ought to be keenly angling for an invitation to the Beehive baby shower chanting ‘go sister’ all the way.

My new life as Her Indoors with two small children involves a 50-minute commute to the farm once or twice a week across Mid-Canterbury. Aided by a two-year-old showing dire signs of the family’s Iron Disease predisposition, last week we counted no fewer than 22 “Diya!” (digger) sightings. Most were in pursuit of Central Canterbury Irrigation schemes requiring a colossal 180km of enormous, 2.5-metre diameter pipe being buried. To say Canterbury is on the cusp of considerable agricultural change is an under-statement.

What this will do to stock values and demand, cropping and dairy land suitability and farm values themselves is not yet known. Add in a rigid farm consenting process, a further step from the nostalgic picture the city-dwelling public want from farming, a socialist Government and it’s all on.

But I’d be a liar if I said it was just pipes and rain that’s got me thinking of my grandmother. Oh Jacinda, how you have got me a fluster. As a 35-year-old ex-banking sheep farmer taking over the family farm alongside my husband and young family, I feel I ought to be keenly angling for an invitation to the Beehive baby shower chanting ‘go sister’ all the way. And yet, all I can muster is feeling tired in advance for her.

Welcome to the world of feeling endlessly stretched for time and energy, entertaining the constant guilt that you’re not doing any one task to the absolute best of your ability.

While we all genuinely offer congratulations and best wishes, I suspect our feminist forbears, my own included, would argue we haven’t got this working-mother gig sussed quite yet.

Then again, you could argue that this is nothing more than blatant jealousy from my part. Having returned home to begin my farming career at the ripe old age of 27, The Boss had a tall order teaching me the ropes.

The Chief Inspector however, had far greater problems on her hands. An unmarried shepherding daughter rapidly approaching 30 with not a boyfriend in sight. Heaven forbid.

So desperate did my dear mother become, that one day while seated reading the newspaper over lunch, she leapt out of her chair, grabbed a pair of scissors and began cutting out a newspaper article. Said article was promptly thrust in front of my face. It read ‘Women Can Freeze Their Eggs’. Needless to say, I promptly got a boyfriend.

You know the story: a boyfriend quickly morphed into a husband, a baby, then another and before I could even whistle wayleggo, I’ve relegated myself into Her Indoors. So deprived am I of an honest day’s farm work, I was positively thrilled to have a couple of long days in the yards pushing up sheep to a crutching trailer last week. So here’s raising a glass to you Jacinda – a glass of non-alcholic pure Canterbury rainwater of course – you’ve got your own inch a week on its way too.