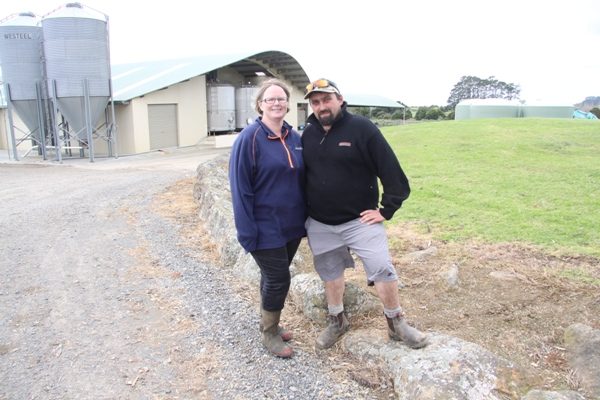 Northland’s showplace high-input dairy farm, Okaihau Pastoral Ltd, was profitable in the 2015-16 season when most dairy farms nationwide made a loss.

That was the season with the lowest inflation-adjusted payout of modern times ($4.30/kg averaged across Fonterra, Westland and Tatua), Dairy Business of the Year competition manager David Densley said.

‘We proved to the farm shareholders that Okaihau had a system that was profitable at $3.90 Fonterra payout.’

Okaihau won the best Northland farm performance award for a second, consecutive time, was the high-input farm with the best financial performance and runner-up dairy business of the year nationally.

Farm managers and newest shareholders Joe and Jenima Foster said the winners were their staff members, rural professionals and shareholders.

But they didn’t match the projected profitability of continuing with system 5 management, when 40% of cow inputs did not come from pasture.

Supplementary feeding is home-grown maize, palm kernel, and waste bread, with occasional waste fruit from nearby Kerikeri, and cows are also fed high-protein chicory in the summer, grown in the re-grassing programme.

Joe Foster has been farm manager for four years, during which time half of the 367ha effective farm has been re-grassed.

Densley and Martin are representatives of Intelact, the pastoral dairy consulting company and one of four gold sponsors of the annual Dairy Business of the Year competition.

This year the farms entered were judged 70% on the profitability of the business, and 15% each on people management and environmental management.

All financials used were from the 2015-16 season, although the field day held at Okaihau, in the Bay of Islands, was also provided with the 2016-17 financials, and both sets of accounts benchmarked against the Northland averages.

“Dairy Business of the Year doesn’t favour any farm system but recognises excellence and the ability to remain profitable through the ups and downs,” Densley explained.

“We proved to the farm shareholders that Okaihau had a system that was profitable at $3.90 Fonterra payout,” Martin told the field day.

“We debated dropping feeding and dropping production, but that didn’t show a big plus for profitability.”

Martin was responding to the sceptics in the crowd of farmers who wondered how Okaihau bucked the industry wisdom that all-grass feeding and cost-cutting was the best route through tight times.

“We already had enough control of expenses and low-to-moderate cost of production (farm working expenses $3.93/kg MS versus $4.30 Northland average).

“Breakeven costs were constantly analysed and the management and board had many debates, seeking to safeguard the shareholders.

“If the projections had showed lack of profitability, different decisions would have been made.

“To continue with high feed inputs not only utilised the facilities we have, but it also required high cashflow inputs and the bank was supportive.”

Martin agreed the consensus approach may have changed in a second year of $3.90 payout, but Okaihau had weathered the financial storm, as it had done with past Northland droughts, and bounced back strongly in 2016-17 when the payout rose again.

Total revenue was up $1 million compared with the year before but gross operating expenses were only up $400,000.

Representing the 16 shareholders, chairman Cam Holmes spoke about the factors behind the Dairy Business of the Year success and the steady improvement in profitability for Okaihau Pastoral.

The initial syndicate of 23 investors was formed by MyFarm in 2007 and for the first five years shareholders had to hang in through some low returns and capital expenditure.

Recently it had been possible to offer a share buyout and the number of investors had reduced to 15, subsequently joined by the Fosters recently.

MyFarm had set up an owners’ committee of all investors, but that proved to be too large and ineffective, so a board of five from diverse business backgrounds now received the monthly reports and met regularly.

“The strengths of Okaihau lie in its people, and the good day-to-day practices that Joe and his team implement.

“The shareholders have also been very happy with the input from Paul Martin and Intelact, providing the link between management and the board.

“We have the extensive feed pad and effluent storage facilities so that dictates to some extent our system 5 management.

“We also have a strong set of skills and experience around the board, driving the business with regular reviews.

“Finally, the shareholders have been very supportive over the past 10 years.

“This has been a good example of a successful equity partnership in Northland dairying.”

The Fosters showed their detailed daily and weekly rostering system for seven staff members, all of whom were rotated through the different areas of responsibility, thus gaining broad skills in dairying.

Okaihau operated a 12-day on and three-day off roster, ensuring each person milked 2.5 times in four days, using a staggered start from 4am.

Cows walked themselves to the feed pad and dairy in the early morning when alerted by latch gates and noises.

“All staff members are home by 5.30pm, showing that having a big farm doesn’t mean endless hours in the cow shed,” Joe said.

“Our system allows all employees to learn every aspect of the farm, so when they leave here they are not just milk harvesters.”

Courses were provided through Taratahi, local vets and representatives from the service companies.

Densley told the field day that cost-cutting during the payout downturn was not done to achieve profitability at the expense of people.

Okaihau has an effluent irrigation system covering 90% of the farm and managing that system is a full-time job for one staff member, rotated through the full staff force on a daily basis.

It therefore spreads both nitrogen and potassium loading across a very large area, and uses solid effluent for chicory fertiliser.

Other features of the system include a Mono pump, three cannons and one new travelling irrigator.

The feed pads are flood-washed with grey water.

All waterways are 100% fenced and Okaihau has a boundary with Lake Omapere with a 50-metre riparian zone.

The Headlands Environmental Impact Assessment done for the contest highlighted high risk of nitrogen loss per kilogram of milksolids and through leaching.

Martin explained that a 3500mm annual rainfall was always going to pose a risk of high leaching, according to Overseer.