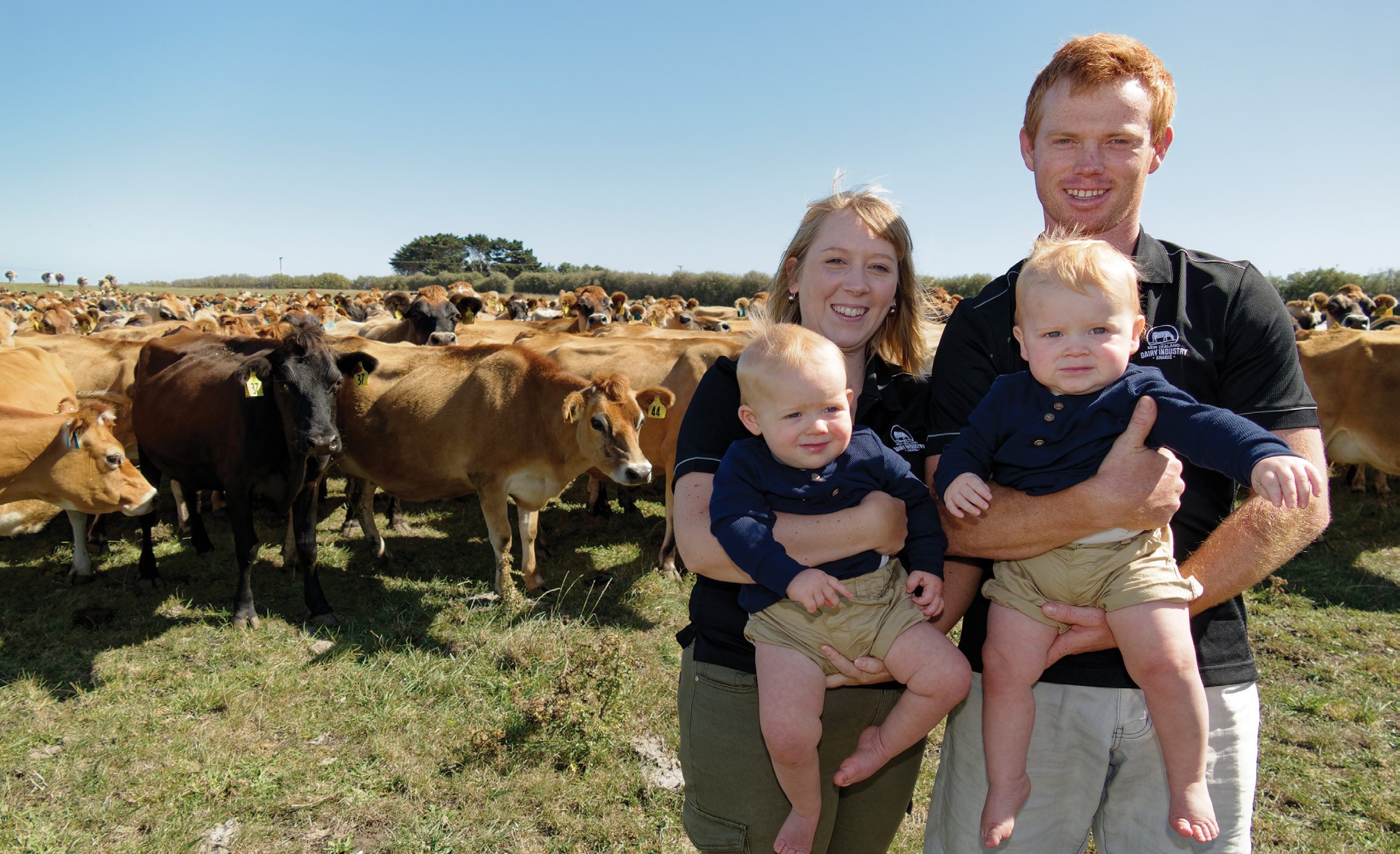 Simon and Natasha Wilkes are extremely proud of the heritage of their fourth-generation Jersey herd they bought under their sharemilking agreement and are committed to making the most of the fantastic opportunity.

The Taranaki sharefarmers of the year for 2020 are sharemilking for Natasha’s family on their 84-hectare coastal Taranaki property just out of Hawera.

They often climb the hill at the back of the farm, and visit Grandad’s rock, poised with an amazing 360-degree panoramic view of the beach settlement of Ohawe, up and down the coast and around to Mt Taranaki in the distance to the north.

Grandad’s rock has a plaque commemorating the life of Natasha’s grandfather Harry Bourke who settled the land for the family and established the Jersey herd which performs in the top 1% of the national herd index.

“We would love to pick up the mantle of Harry’s lifework, and of my parents who followed him,” Natasha said.

The 29 and 30-year-old couple are running 320 peak-milked Jersey cows in their Landseair herd, (Harry coined the moniker on account of the link between the land, the sea and the air) with an average of BW197 and PW206 and recorded ancestry of 95%, with a top cow reaching the heady heights of PW588. A couple of the bulls have been in the LIC bull team and several cows are under contract.

Simon and Natasha returned to the family farm, now owned by Natasha’s parents Morris and Debbie Bourke, in June 2018, their first sharemilking job after working their way up through the industry in Otago, Manawatu, and Taranaki.

Simon first picked up the cups in the Bourkes’ dairy shed as a summer job while he was at Otago University where he met Natasha. 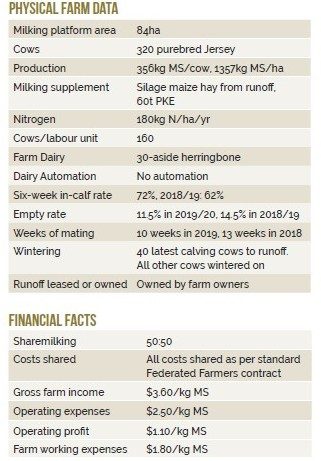 He says that summer he found a passion for the industry and from there he took up a dairy farming position. Natasha finished a masters of dietetics through Otago and worked for four years as a dietitian in the Manawatu – rising to a managerial position with responsibility for 40 foodservice staff.

She commuted from Hawera to Whanganui Hospital until halfway through their first sharemilking season, when pregnant with their twin boys, she left her job and was able to focus on the farm business.

The couple have implemented a number of initiatives on the farm, with plans to lift production from 1357kg milksolids (MS)/ha to 1571kg MS/ha on the summer dry coastal farm.

They call the cows their Golden Girls – a well-deserved name for a herd of cows who are already producing at 99% feed conversion efficiency, in 2018/19 averaging 373kg MS/cow from an average liveweight of 375kg. Simon and Natasha think it’s possible to increase efficiency to 110% kg MS/kg liveweight.

Compacting the calving to realise more days in milk has started, with the pair managing to decrease the 13-week mating period to 10 weeks this season and reining in the empty rate from 14.5 down to 11.5%. The plan is all AI for the main herd and reducing the AI period by one week each year until it is down to seven weeks. The cows received daughter-proven Jersey bull of the day semen from the LIC team and the bottom 15% of producers were mated with Kiwi X semen, and then “spit out a little black calf that we don’t what to keep”, Simon said. The contracted cows were mated to nominated sires and all cows finished off with three weeks of the Angus bulls.

Reproduction is a major focus so they don’t cut costs here, Natasha said.

This year we will use the new LIC short gestation Angus semen from LIC for the bottom 25% and everything else will get the daughter-proven Premier sire team.”

“We have also been looking at the sexed semen and thinking about using some of that for our top 25%.”

The DIA judging has made them think about how they could maximise the value of the cows in their high genetic performance herd.

“As the judges said – ‘your bottom cows are like someone else’s top cows – someone will want to buy them – it’s a waste to be culling them’ – so we are thinking about the best way of selling our surplus heifers and bull calves, leasing out heifers or working to increase cow numbers.”

Each calf that comes into the shed has its mum identified and looked up on a list at the calf shed – the mothers are examined for several traits – PW, BW, breed, age, expected calving date and matched up so we know definitely that that is the mother – and then the couple DNA test some of the calves for ancestry – because “if you keep them then you want to be sure of the parentage”.

As part of the move to enclose the herd to shore up biosecurity, the couple use 10 of their best bull calves over the R1 heifers and will bobby all the heifer calves from this cross.

Dry off was May 22 last year for a July 5 calving date and after lots of research Simon and Natasha went to OAD in early February.

“The herd has always been full season TAD but we wanted the cows to hold their condition going into the winter and the cows are much happier on the pasture in the afternoon chilling out – they were not keen to be milked in the hot, dry conditions.” Simon said.

“By Christmas we have captured 2/3 of our annual production anyway, of course we want the rest but it’s important to look after the cow condition in the dry late summer period.”

The move has worked well, they say, with a drop in kg MS/day which then recovered and a similar reaction with somatic cell count a small spike followed by recovery.

With a more compact calving and higher early spring feed demand, Simon has been working with their local Agriseeds rep and Farmsource to establish a sward to meet the demand. They have decided on a Governor AR37 ryegrass for earlier spring production along with red and white clover and cocksfoot to boost summer growth and improve the persistence of the sward.

A chicory crop to supplement pasture the summer dry has proven a winner, with 12ha established also providing the grass renewal opportunity. Simon plans to renew the old pastures over the whole farm in seven years.

A rethink of the roster and staffing conditions have made life much easier (or as easy as 320 cows and twin toddlers could ever be!)

Simon had been working every day with a 12/2 roster and one other staff member but he and Natasha decided it made them too vulnerable to ill health and staff loss.

“When our staff member had a car crash, my mother-in-law had to come and stay so that I could help milk – in between breastfeeding the twins – then we realised we were too vulnerable,” Natasha said.

They have since reset the roster to 5/2 and recruited another staff member. Natasha’s work experience managing a large team and the processes around that have proven valuable and now with two team members Simon is able to get a weekend off with Natasha and their two busy toddlers Dean and John.

“Now we don’t usually have to pay relief milkers if someone is sick – we can cover it within the team, and it’s great to have two members who know the farm.”

“We know it’s hard to keep good staff, and expensive to recruit new staff, we realised it’s the quality of the person you are looking for to fit in with your team, not the skill they possess – because skills can be taught. So we had a fairly rigorous interviewing system.”

They now have an older more experienced ex-sharemilking staff member Kevin Behrent and a young keen career-changer Roy Thomas who is brand new to milking cows but has reared calves and is keen to learn and build a career in the sector.

The couple are much happier now they can get off farm, play some sport (Simon plays premier division soccer, summer soccer and touch, and chairs both the Taranaki district and his local South Taranaki Young Farmers Club) and Natasha attends a mum squad fitness group and rural mums farming group along with child development playgroup with the boys.

It’s a busy life but one they are embracing to the full, loving their Golden girls, the coastal paradise and their sharemilking opportunity. Grandad would be proud.

Runner up in the category were Philip and Pia Rockell from New Plymouth and Josh and Carly Corrigan were third.