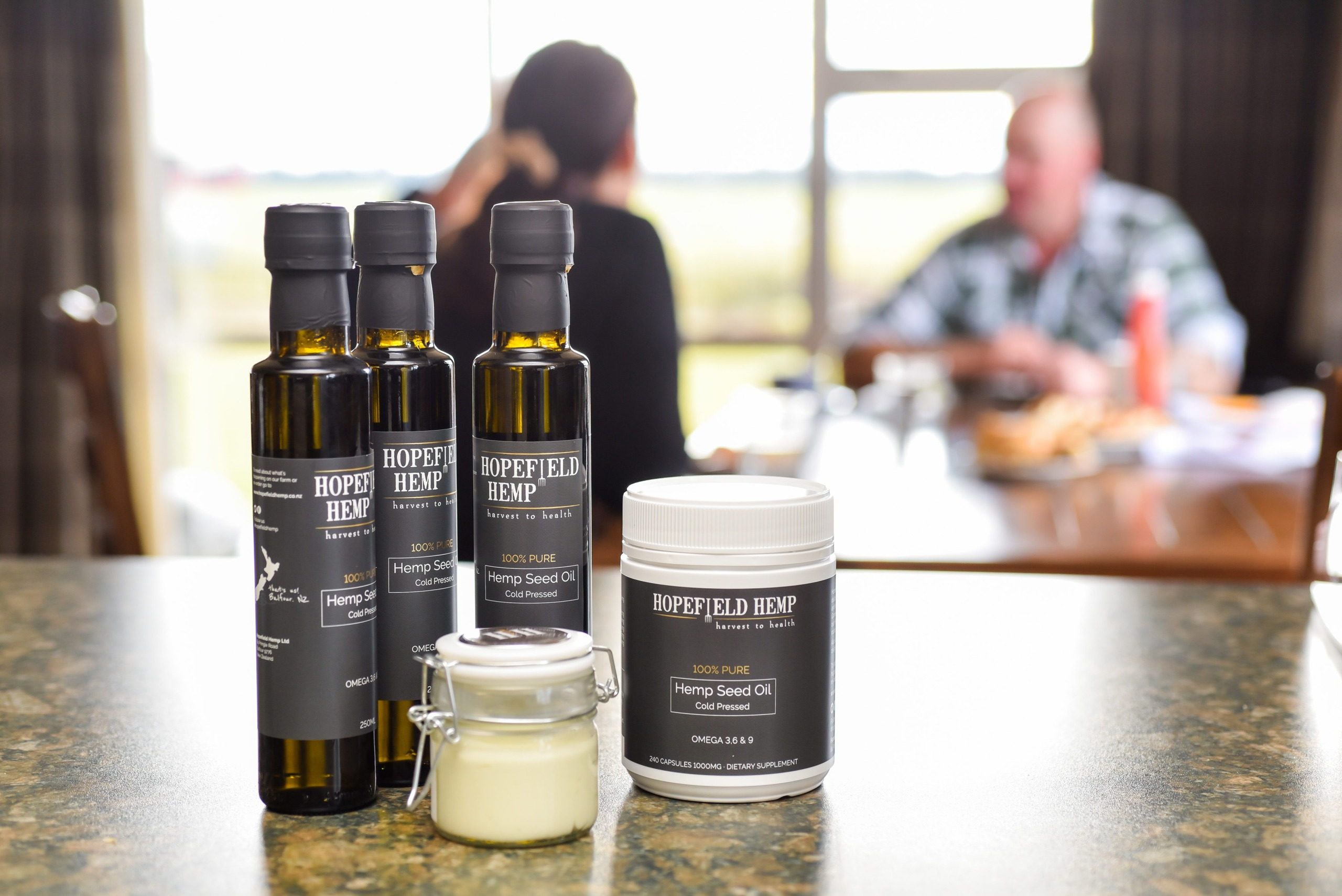 A Southland farming couple has turned their hemp crop into high-value products as well as making it a family affair. Terry Brosnahan investigates. Photos Chris Sullivan.

Satisfaction of farm products going out the gate with their label on it is priceless to Balfour farmers Blair and Jody Drysdale.

It is only the second year of growing hemp for seed, the first for processing it, yet the Drysdales have achieved a lot.

Blair (42) and Jody (40) have overcome bureaucracy and processing issues to sell their home-grown hemp seed. They are pressing the seed into oil to be bottled and made into capsules which they sell through their website.

They have had no problems selling their oil and capsules. On the first day their website went online they had 25 orders.

Under Covid-19 lockdown sales soared and by August the bottled oil sold out. The capsule supply is running low.

With selling through a website there is no middleman.

Blair and Jody grew the crop with the intention they would process and sell it.

Blair had always wanted to do a paddock-to-plate product so he could have the connection with the consumer.

“It was always an itch he wanted to scratch,” Jody says.

They had investigated setting up a butchery in Queenstown 15 years ago, but decided it wasn’t a runner.

Hemp had been considered after the change in the regulations, but hadn’t gone anywhere until a chance conversation. One day Blair was talking to an agronomist who told him of a farmer growing hemp in West Otago, Athol Lawlor. Blair investigated it further and away they went.

A major advantage for the Drysdales was they had all the machinery from their cropping business to grow and harvest it. No specialised equipment was needed until it had to be dried. They already had a batch drier but needed a drying trailer in the paddock. Blair converted a Bedford truck into a drying trailer with a perforated floor and a fan on the front driven by a petrol motor.

They planted their first crop in December 2018 and harvested it in early April.

It was easy to run through their CaseIH Axial Flow even though they were warned it would damage the combine. Blair didn’t even break a knife section. About 1 tonne/ha of hemp seed was harvested.

The 2019-2020 crop was hit by hail, frost and a lack of sunshine,and excessive rain. Hemp doesn’t like wet feet.

Blair says the yield was absolutely abysmal and didn’t give a figure, but last year it was 1t/ha.

The hemp goes in about late November-early December though they are pulling the hemp sowing date forward to increase yield. The harvest date will still be the first week in April. As the days shorten, hemp starts to go reproductive so planting too early can make it grow taller.

“We don’t want great lengths of that tough fibre going through the combine,” Blair says.

Last year they used a tyne air seeder direct drill but it caused too much soil disturbance and weeds to grow.

“We are doing it all without spraying, it is a chemical free crop.”

The crop is sown into a stale seedbed and doesn’t require spraying as it has natural defences against pests.

This year they will try a disc drill with minimal soil disturbance to get it off to a good start.

Five days after it is sown the hemp is about 25mm high.

The crop is usually harvested after 120 days, this year it was 125 days. The New Zealand average is 900kg-1.2t/ha. Blair would be happy if they harvested 1.2t/ha. Tonnage doesn’t worry them too much as they capture more value by processing and marketing it themselves.

“But we still want the paddock to pay for itself,” Blair says.

As soon as the sparrows start getting into the crop, it’s time to harvest.

They have to beat the birds and the seed has to be dried quickly.

“If you don’t dry it within three hours it will turn to compost.”

Once it starts to compost it ruins the oil quality. So can too much heat.

Hemp is harvested at 28% moisture and why the drying trailer needs to be in the field.

The combine bin never fills up and is constantly emptied into the trailer with Jody on the shovel making sure it is spread evenly. Then it goes back to the shed to be dried.

Dried seed is sieved by hand to take out chaff and weed seed then stored in 500kg bags until needed. It will go into 40kg bags for processing.

Once it is between 8-9% moisture, rodent proof and kept out of sunlight it has a shelf life of at least two years. But it will never be stored that long.

This year they imported an oil press from Germany which arrived during lockdown in May.

There are no dealers in NZ so they went through an agent in Australia to import it. There was no-one to install it or to ask questions about. Blair got it working through trial and error, changing setting after setting.

Once pressed, the oil is stored in drums and the oxygen is purged by food grade nitrogen gas to make sure it doesn’t go rancid.

The first crop was toll processed and initially they weren’t going to make capsules, just oil. It is easier to take hemp as a capsule than as an oil. The Drysdales didn’t want to outlay any more money but found a company via Google to make the capsules.

Processing their own oil has given greater control over timing, quality and the percentage which can be extracted.

The hardest part of the hemp process was dealing with bureaucrats.

Jody says the licence application process was “extremely frustrating” and took seven months to obtain. They couldn’t buy the seed without a licence.

Jody says though it is not organic, customers like the fact no chemicals have been sprayed on the crop. They also like the story about a family business. She puts out a regular newsletter and includes the children in it.

The Drysdales make no claims on the label. They believe hemp is good for general well-being but a cure for nothing.

“It is also a very good salad oil”, Blair says.

Last season four hectares were grown but there will be 10ha this year.

They had bought half of the 320ha farm and until two years ago they leased the other half from Blair’s parents Ken and Fiona. Blair and Jody were also first time parents.

They later became worried about too many enterprises on the farm and diversity becoming “di-worsity” for the farming business.

“If you try to do too many things you lose your scale,” Jody says.

So after a review , they got rid of the cow grazing, beef cattle, calf rearing and most of the breeding sheep.

Now they crop 160-180ha and lease 30ha to a tulip bulb grower. The soil and climate makes it ideal for growing tulips. The rest of the farm is in pasture for grazing hoggets or finishing store lambs and the remaining 150 ewes which includes 75 Wiltshires.

The Drysdales would eventually like to increase the Wiltshire flock to about 400.

He needs them to keep the grass down around the farm especially with fence lines. He doesn’t want to start spraying and create perfect weed havens.

The store lambs and hogget grazing give good winter cashflow for a cropping farmer.

In the past two years they have finished 1600 store lambs but this winter only 150. Instead they grazed 1000 hoggets.

A typical rotation on the farm is winter wheat to oil seed rape to winter wheat then two years winter barley followed by greenfeed rape for store lambs or hoggets then back to spring barley. A grass phase didn’t pay its way.

Harvest was tough this year as Blair was on his own due to Covid-19 and the weather was rubbish.

It is a flat, square-shaped farm with two-thirds Crookson silt loam soil, the rest is clay loam. The long-term rainfall is 785mm.

Half of the farm can be irrigated thanks to irrigation put in for the tulips. So the tulip company’s travelling irrigators could be used for hemp too. July is normally the driest month, January the wettest.

They tried growing 2ha of sunflowers this year but it was hit by disease and flooding then the birds beat the combine to it. It ended up a sacrifice crop and helped save the hemp from the birds.

Blair said in a drier year and with a larger paddock to dilute the bird damage, sunflowers would be worth growing again. 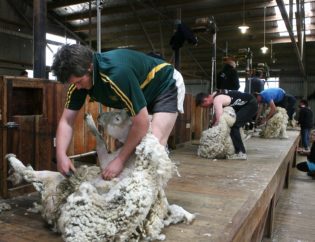 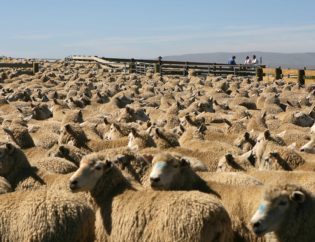