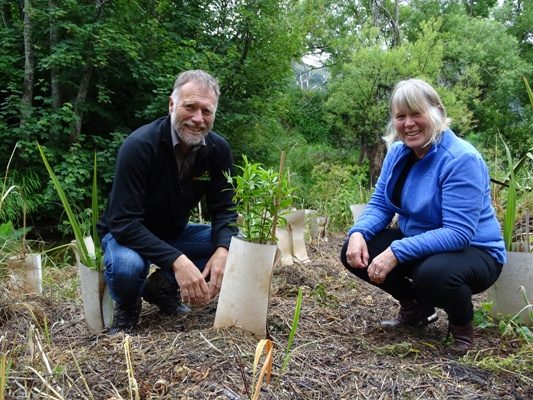 Planting for the environment and then putting plastic guards around the plants is a paradoxical exercise which led to a Nelson family developing a biodegradable cardboard plant guard that can be recycled or left around the plant to let nature take its course.

EmGuard is the result of Jan and Robert Fryer’s daughter, Emma, who as a 15-year-old helping on a wetland planting, questioned the use of so much plastic around the plants. It was fresh eyes from a younger generation’s perspective and in her view the lack of alternatives to plastic was just not good enough. It led to a project for a youth enterprise scheme at school, trials and eventually a product that is now part of her parent’s business, Futurecology, which provides smarter solutions for land and water use.

Today, her plant guards have evolved into a laminated cardboard product made from recycled pulp, manufactured in New Zealand and sold at $1.60 each, or less for large orders. They were launched on to the market earlier this year and already the Fryers have orders from the length and breadth of the country from councils, developers and landowners wanting to keep plastic out of the environment.

‘Being able to put them on and forget about them is the big thing. We’ve had really good feedback, mostly about how quick and easy they are to use and you only need one stake.’

Emma’s first cardboard plant guard project began four years ago and Robert says she was forever trialling them in the vegetable garden to see how they coped over time and how long it took the cardboard to rot into the ground.

“She got to the point she couldn’t move it any more – companies weren’t interested in dealing with a school girl from Nelson.”

It became a family project to fund and further research the product, then find a NZ manufacturer to produce them because they wanted them to be made in NZ from materials found here.

“The hard plastic comes in from China by the container load. Our real interest in doing this was to change the industry. If we can change one aspect of what people do, then that’s success for us. We’ve got a dirty plant industry really because we input plastics, water, fossil fuels and fertiliser.”

Robert says everyone has a different reason for using plant guards, such as protection from rabbits and pukekos or protecting from a spray regime and wind. The problem with plastic guards is that they must be removed and if they get blown off the plant or swept away in the wind, they become a problem in the environment, often in a waterway.

He knows the problem well. A nurseryman by trade – who along with Jan spent 14 months with their young baby on Stephens Island by themselves where he created a native plant nursery to plant on the island – he has spent years planting for various projects and usually used the core flute plastic plant guards.

“The plastic guards get loose on the stakes and blow away and it’s plastic all over your farm. I’ve found them jammed up in rivers and streams.”

Plastic guards need to be removed, otherwise it’s plastic left to disintegrate in the environment and Robert says the industry needed a product that could be put around young plants and left there.

“Being able to put them on and forget about them is the big thing. We’ve had really good feedback, mostly about how quick and easy they are to use and you only need one stake.”

The cardboard guards are lasting at least a year on the plants and he says that’s the important period for plant protection, especially root trainer-size plants. Through their planting work they have noticed the bamboo stakes – and only one is needed with the EmGuards – break down before the cardboard. That happens with plastic guards as well which allows them to blow away. Despite being cardboard, Robert says their guards have survived floods and stayed intact to protect the plant. 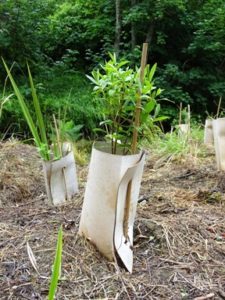 “The crucial time with new plantings is spring time when the grass runs rampant. A simple timely spray ensures they get away and grow. But if you miss that crucial period in spring it isn’t going to work. Farmers are busy with calving and it’s a busy time of year for them to find time to spray around those plants and free them up. And that is one of the problems with riparian plantings on dairy farms. It has to be made simple and manageable and these guards go some way towards making it simpler.”

Weed-eating around plastic plant guards can chew up the plastic and spread it into the environment and though cardboard will also get damaged by the weed-eater, he says the fragments will just rot into the soil.

They’ve noticed some plants in particular thrive in the cardboard plant guards and suspect that may be due to the insulation value of cardboard through winter.

When the Fryers began selling the EmGuard early this year to their network of planters and landowners they worked alongside in their business, they intended to just take it slowly. However, around the country, people liked the idea of less plastic in their environment and their number of customers has just grown naturally including individual orders of 20,000 or more, though he says there hasn’t been a great uptake from dairy farmers.

Their product continues to evolve and the latest prototype has their logo pressed into one of the three sides of the plant guard so that the pressed parts drop out to let more light into the plant.

The plant guards are just one part of the plant industry that uses a considerable amount of plastic such as PV bags and plastic root trainer cartons and he says the industry collectively needs to find alternatives. Likewise, he says the dairy industry uses considerable amounts of plastic that either needs substitute materials or a change in the processes that require that packaging.

Meanwhile, Emma is travelling overseas and when she returns home intends being part of the family business, with an interest in marketing.