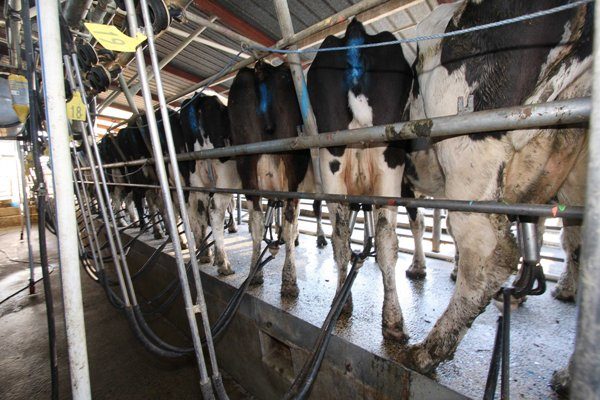 Milking cows is a seven-day-a-week business, but we live in a weekend-centric society, so isn’t it about time farmers played around with milking frequency and maybe have a sleep-in during the weekend before milking the cows?

FarmWise consultant Brent Boyce says twice-a-day milking (TAD) and once-a-day (OAD) have been around for decades and more recently three milkings in two days (3-in-2), but there’s no reason we shouldn’t be looking at 13 milkings a week, 12, 11, 10, nine or eight.

“It’s only limited by people’s imagination,” he says. It’s about getting more of a life balance into the dairy industry where everyone gets a chance to go to rugby or netball practice, play a game on Saturday and go out one night, knowing they get to sleep-in the next day. By bringing flexibility into milking frequency, he says farmers can achieve similar milk production, with less pressure.

Boyce began investigating milking regimes nearly 20 years ago after a horrifically wet spring in Murchison led to him encouraging farmers to try milking every 16 hours instead of TAD. It evolved into a 14-16-18-hour regime which today is the 3-in-2 milking widely used by farmers who report they can maintain or even increase milk production from mid-lactation over summer.

‘What happens when you get to the end of August, beginning of September and it’s all getting too much. So you decide to milk at 10am on Sunday and give everyone a sleep in. You can afford to lose a bit of production and it will take the pressure off.’

The result is they have been able to farm as profitably as they did on TAD, but milking less, he says. While 3-in-2 – which works out at 10.5 milkings a week – takes the pressure off the system and staff, it does create confusing weekends and milking rosters. So it got him thinking about other options.

OAD doesn’t suit everyone for numerous reasons, whether it’s because the bank manager won’t let dairy farmers drop milkings or they have their heart set on maximising production, but Boyce says there are all these other options in between TAD and OAD.

“There is something that has been staring at all of us for years. Simply put – there are some massive gaps between our current three milking regimes.

“What happens when you get to the end of August, beginning of September and it’s all getting too much. So you decide to milk at 10am on Sunday and give everyone a sleep in. You can afford to lose a bit of production and it will take the pressure off.”

Or consider, he says, instead of going to 3-in-2 at Christmas, going to 10-in-7. By taking out just half a milking every seven days, it becomes 20 milkings a fortnight on 10-in-7 versus 21 milkings on the 3-in-2. It may not seem much, but he says there’s a subtle difference to the working week as shown in the following table below.

Nine farmers in the Top of the South have been trialling flexible milking frequencies and Boyce says data collected from the lactations shows no significant change in production or somatic cell count (SCC) compared with starting 3-in-2 around Christmas.

“Let’s then imagine things go a step further – it’s now mid-March. Normally you might stay on 3-in-2 to the end, or may even go on OAD for the last month or two. What about trying 9-in-7 instead? There are two more milkings than OAD – the increased frequency of milking should maintain a higher milk harvest. This has not been confirmed scientifically, but the limited farmer observations to date are showing that 9-in-7 is better for both cows’ productivity and SCC than OAD – and it is better than 3-in-2 and even 10-in-7 for staff. To do 9-in-7, simply milk TAD on say Monday and Thursday, and the remaining days are OAD.” 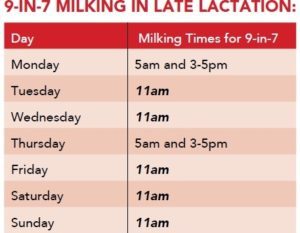 Milking times in the tables are purely indicative and Boyce says farmers may decide to milk earlier or later and have shorter or longer gaps. Milking times each day can be quite flexible, with best-known practice to date looking like the following table below.

Even in late lactation, Boyce says there are usually some losses compared with TAD, even if going to OAD about April. He says farmers know 3-in-2 and its varied hours does work. Moving to 10-in-7 and 9-in-7 will extend times between milking during the weekend and similar, so he says it’s important to try and time the milkings equidistant between each milking – ideally halfway.

All of this provides options from mid-lactation, but as he points out, the crunch time for most farmers is typically in the first half of lactation.

When farmers first trialled milking OAD just for Christmas Day – as once advocated by Dexcel – they had issues with SCC because they milked the cows at the usual 5am or 6am. Whereas today, he says, best practice is to milk equidistant between Christmas Eve (3pm) and the Boxing Day morning milking (5am). The gap is 38 hours, so halfway between is 19 hours which means best practice for that Christmas Day OAD milking is 10am.

Using the best practice learnt from Christmas Day milkings, he says it’s not a giant leap to then use that thinking for those tough springs when everyone is doing it hard.

“Essentially, you have just milked 13-in-7. Not enough farmers have done this (yet) for us to say with authority that this could be the new normal. However, it is highly likely that we will have the numbers this coming season to have greater confidence. The question would then be, if Sunday OAD works, could we then do Wednesday as well and even have 12-in-7?”

To date, there’s not enough information on flexible milking frequencies to recommend it to everyone, but the point, Boyce stresses, is the lack of structured time off is one of the things that makes it difficult to attract staff to the dairy industry and hinders everyone’s work-life balance.

To counter the argument that cows will struggle with different milking regimes, he says cows aren’t dumb and have proved with 3-in-2 that they can readily adapt. They just need to be fed more for the extra hours of grazing between milkings and what usually stimulates them for milking is the vehicle coming to get them in.

“The cows are flexible and are smarter adapters than we think. We need to adapt our own practices and have the conversation on how we too can be more flexible and smarter in our businesses.”