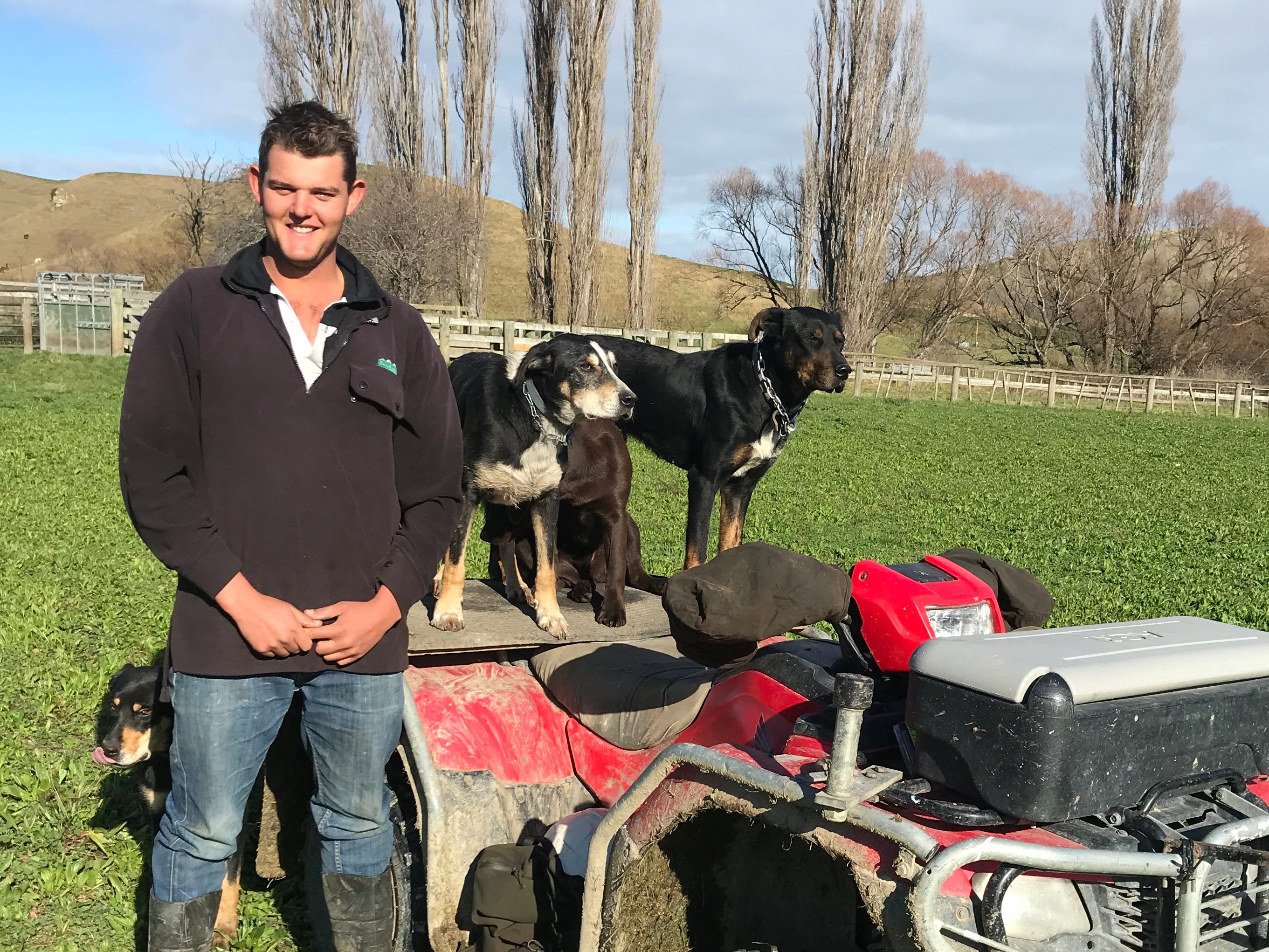 Chris Hursthouse is proof you don’t have to grow up on a farm to be successful in the agri-food sector.

The 22-year-old is a shepherd for the R+C Buddo Trust at Poukawa, near Hastings in Hawke’s Bay.

The trust finishes 15,000 lambs and 500 bulls a year across four blocks totalling 825 hectares.

“The operation has a big emphasis on using plantain and clover forage crops to fatten lambs,” said Chris, who’s the chair of Tikokino Young Farmers.

“Plantain grows really well here through the autumn and spring with stock finishing exceptionally well on it.”

Chris was recently named the inaugural winner of the new Hawke’s Bay Shepherd of the Year award.

He put himself forward for the title, which is part of the Hawke’s Bay Primary Sector Awards, after seeing a post on social media.

“I thought I’ll never know unless I have a go, so I downloaded an application form and filled it out,” he said.

“I didn’t expect much to come of it. I was surprised when I found out I’d won, but stoked at the same time.”

Chris found the judging and application process a beneficial exercise which encouraged him to think about his future.

“As part of the application process I had to submit a CV, a cover letter and five-year career plan,” he said.

“It made me stop and think where I’d like to be in five years’ time and what I have to do to ensure I achieve my goals.”

Chris is on a rapid rise through the industry. He was raised on a lifestyle block and attended Lindisfarne College.

A “passion for being outside and for animals” led him to study through Taratahi to gain some basic farm skills.

He landed his first summer job in Ongaonga. He then took the plunge to dramatically grow his knowledge by taking a job in Kereru, working on two farms.

The opportunity was a great way to learn from different farmers.

One property was a sheep and beef breeding and finishing farm. The other was a large-scale deer breeding, finishing and velveting property.

“I’d never seen a deer until I started working at that farm,” laughed Chris.

“It was a good way to gain a broad range of skills and understand different aspects of farming production.”

“It was a massive learning curve, but an experience I really enjoyed and got a lot out of,” he said.

Chris has been in his current job at Poukawa for a year.

Finishing 12,000 lambs through the winter and spring, and a further 3000 in the summer and autumn, is no easy feat.

“There are three of us, plus the boss, and we get together weekly to determine what needs to be done and set a plan,” he said.

Chris’ day could include anything from weighing or drenching lambs, to shifting stock or repairing fences.

“In the spring we spend a lot of time weighing and drafting lambs,” he said.

“September, October and November are our biggest months where we’re supplying lambs to the meat works on a weekly basis.”

The intensive nature of the operation means the lambs and bulls are used to being around people.

“Grazing the forage crops is quite intensive, but I really enjoy that side of the business and seeing a well-finished product going into a high-end market,” said Chris.

“Those paddocks are split with three-wire electric fences and livestock are rotated through them. The rotation length varies depending on the time of the year.”

Chris enjoys getting involved in his local community and chairs Tikokino Young Farmers, a position he’s held since last October.

“We’ve got a great club. It’s a good bunch of people and you don’t have to be a farmer to join up and get involved,” he said.

“NZ Young Farmers clubs are a great way for young people, especially those new to an area or working in isolated jobs, to make friends.”

One of the club’s members Joseph Watts represented the East Coast in the FMG Young Farmer of the Year Grand Final in Hawke’s Bay in July.

“It was awesome to have the grand final in our region so we could easily get along and support Joseph,” he said.

Joseph and Chris have similar backgrounds – neither of the young men were raised on a farm.

As a past student of Taratahi, Chris was saddened to hear about the education provider’s demise.

“It can be a struggle to get into the primary industries if you’re not from a farm,” he said.

“Taratahi played a vital role in giving young people training and an understanding of basic skills to help launch their careers.”

“Its closure has left a big gap that needs to be filled.”

Chris’ advice for urban residents considering a career on the land is to work for progressive employers who embrace new ideas.

The young shepherd’s end goal is to one day buy his own farm.