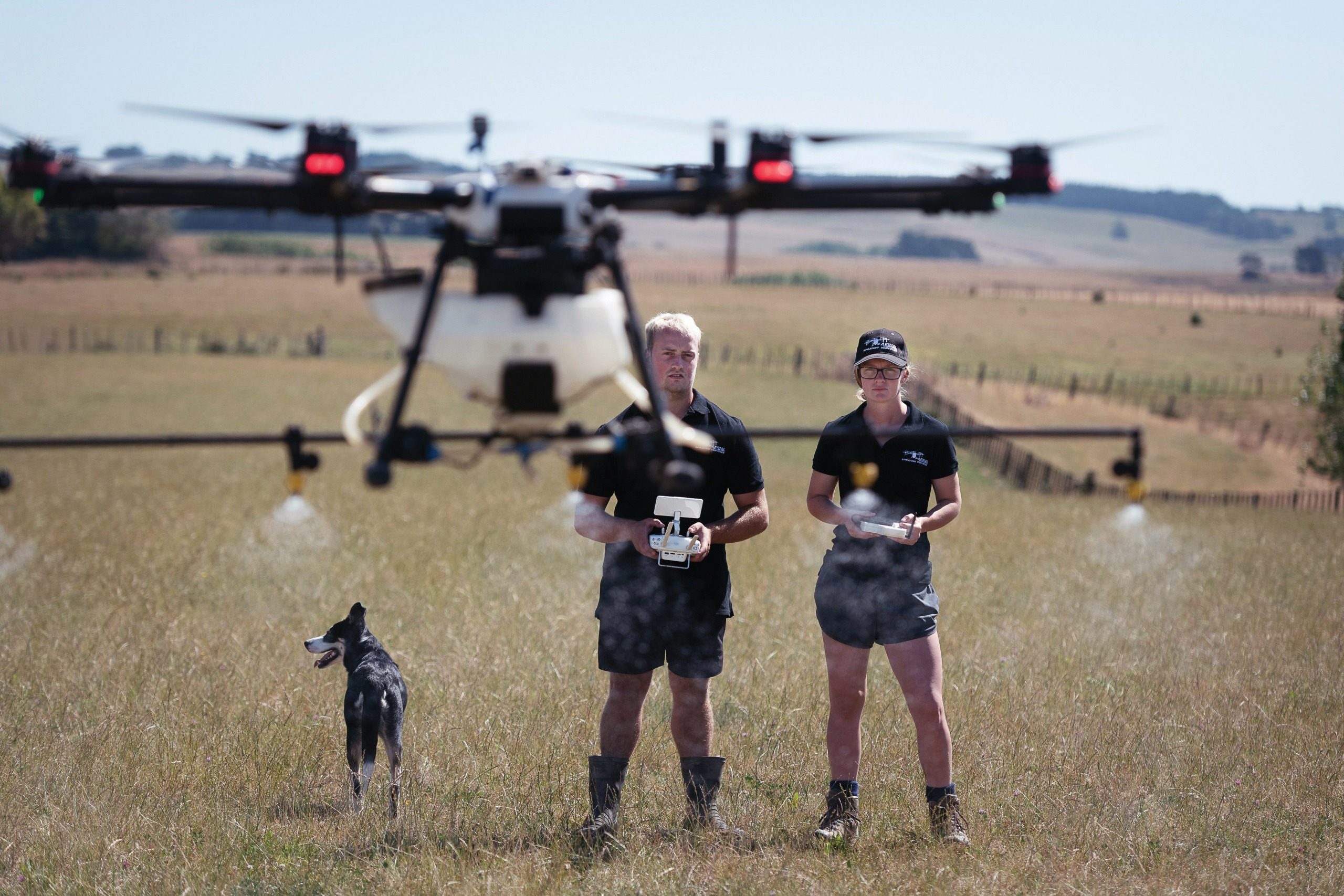 An aerial spraying business using drone technology wasn’t originally on the cards for Isaac Taylor. But two years and two drones in, the 22-year-old is fast growing his business with partner Kelsi Hoggard.

His successful second career came about after a diagnosis of ankylosing spondylitis, a form of spinal arthritis. Hailing from a sheep and beef farm near Marton, he worked as a goat culler after leaving Feilding High School – until the illness struck at 20 meaning he could no longer walk the distances required of his work hunting wild animals in the hills.

Casting around for ideas on what to do next, Isaac thought of aerial spraying with a drone.

“I don’t even know where the idea came from, but I thought it might be a good business to get into,” Isaac says.

“While I wasn’t all that interested in drones themselves, I was quite taken by the unmanned aerial technology and the applications for that.”

So he set about researching on Google and setting up the business – buying his first drone, a 10-litre spray capacity DJI Agras MG1S drone with four spray nozzles across its 1.8×1.8-metre frame.

The battery-powered model required a kit of eight 4kg batteries, a 7kVA generator and a bank of charging hubs mounted on a six-wheeler ATV to keep the drone fully powered for a day’s work. The bike also carried the spray tank and mixing drums and Isaac invested in a ute and trailer to tow all the equipment.

Poor spray power from an underpowered pump led Isaac to modify the drone to deliver more spray, a job complicated by the built-in controller and inaccessible electronics and pump on the Chinese-made model, but he persisted and with the help of a technician in Auckland managed to pimp the performance from 1 litre/minute to delivering 11 litres of spray each minute, allowing a spray load of 120-130l per hour, once reload time is factored in.

While many lessons have been learnt by the pair, and “some of them have been expensive”, they have been working up and down the country as word spreads about the effectiveness of the mode of spraying.

“We are not looking to take work away from the helicopter sprayers,” Isaac says, “but we are able to come behind them and get into all the tricky and inaccessible spots to follow-up and spot-spray. And we can do it very cost-effectively and with half the amount of water.”

Isaac is the drone operator and Kelsi, who joined him in the business, is the legally required spotter.

“I am there to spot any impediments to his flying – wires, planes, banks and trees – but I am also the product loader, gate-opener, paperwork and admin assistant, and general dogsbody,” she laughs.

Isaac wears FPV goggles “that make him look like an alien”, Kelsi says, allowing him to see what the drone is seeing while operating the drone. This way, he can spot the weeds and activate the spray function only when he sees the weed they are there to eradicate. There’s no wastage of active ingredient or chance of killing other species.

He has also installed a carbon-fibre boom to the unit, with five spray nozzles to give a wider pattern, and designed a gorse gun to shoot from the front of the drone.

The high-spec HD camera has a great resolution for spotting and identifying the weeds they are paid to target.

“It’s a much more ecologically friendly way of weed spraying, as it targets the actual weeds and uses much less active ingredient,” Kelsi says, who has found her Bachelor of Science degree in zoology and plant biology a handy resource.

The young couple have upskilled in knowledge on weeds and spray chemicals and offer farmers the chance to supply their own chemical or have the company provide it. All mixing is done onsite and in small batches to maintain good suspension in the spray tank.

In a newly minted industry, Isaac found the certification process to fly drones grew as he was going through it and reckons the original $5000 cost blew out to $15,000 by the time he was finished. He has passed the CAA Part 102 Certificate and 2019-2020 UAS Pilot Certificate, acknowledging they’re a cost of doing business and an important way of keeping the industry regulated and safe.

“After six months of supervision and the year it took me to get my certification, along with a heap of paperwork, I think what was a hindrance at first could help us to secure the market now – it’s quite an involved process.”

They recently bought a petrol-powered hybrid HSEM4H drone (with enough battery in reserve to bring it down safely) and say it is far more environmentally friendly without the unrecyclable lithium batteries, more cost effective to run and easier to carry spare fuel rather than a bank of batteries and a generator.

“The petrol motor should easily last four years and it is cheap to do annual maintenance and then rebuild it.”

The new drone pumps at 12l of product per second and will allow spraying of 130l/hour with an autotimer that records flight time for charging out – but comes with more noise pollution due to the two-stroke motor.

Work has been growing with increased awareness from their Aerial Spraying Services Facebook page, website and flier drops in rural letterboxes alongside positive word-of-mouth recommendations.

Gorse, blackberry, manuka, thistles and Old Man’s Beard are frequent targets, along with a contract with the local Horizons regional council for spraying gunnera – a common homestead garden plant for many years that has become a pest plant as it escapes and seeds prolifically. Weeds in blind gullies, on steep banks, under tree cover, and places where helicopters can go but tractor or quad bike-based spray units can’t easily reach are all good candidates for drone spraying.

“Farmers who have weeds on their runoff and are not bothered to shift their ground spray rig to the property for small jobs find the aerial spraying service quick, efficient and cost effective where we can take out the scattered gorse and ragwort in a very short time,” Isaac says.

“It’s amazing that farmers really get the versatility of the drones once they have actually seen it working – lots of clients have asked us to come back again next year and do another area.”

Isaac’s business ethos is to add value and not cost, and he is always thinking of ways to expand the business to take full advantage of the spraying capability and the versatility of the drones.

While many of them are commercially sensitive he says there are many more things you can spray through a drone other than water and chemical.

vamtam-theme-circle-post
 Category Young Country
Charlie Pearson “I was pretty surprised really, to receive the scholarship! Like with most things...
 Tags Young Blood
Read More

Learning how to be sustainable leadersA focus on study