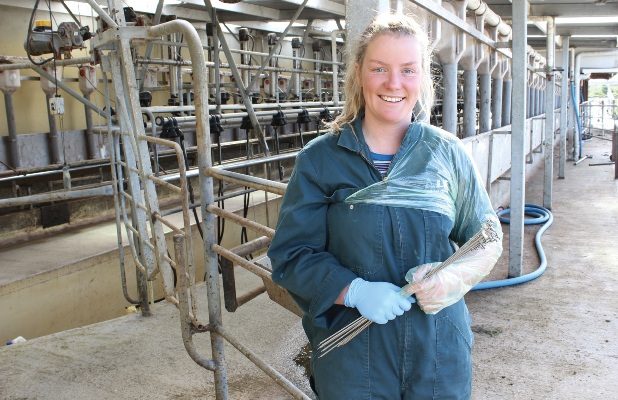 Back managing the family dairy farm after finishing a degree at Lincoln, Kate Brown put a glove on her hand for the first time and had a go at inseminating a cow.

“Our AB tech is Nikki McLennan and she got me to have a go. I’d seen Dad do it when I was a kid and I’ve always been interested.

“But that first time I had no idea what I was feeling inside the cow and it was also really hot. People don’t realise the temperature difference when a cow is on heat.”

She completed the LIC AB (artificial breeding) technician training and that spring was an apprentice with Nikki as her senior, finishing the run for her when the number of cows dwindled.

Now, three years later, she’s looking forward to the start of another AB season with about 4500 cows to inseminate in seven herds, although this year will take some juggling.

‘I’ve learnt that the longer you stay in the cow the harder it gets to inseminate it. They tense up inside. If I get a really difficult one I usually leave it and come back to it.’

Kate (24) and her partner Reuben Burgess have been 50:50 sharemilking for Kate’s parents Roger and Jenny Brown since June 1 and although cups are on at a leisurely 7.30am, with the cows only milked once a day, Rueben won’t be in the dairy while Kate is on her run.

“He likes his sheep farming and has a team of dogs so I think we’ll be milking the cows in the afternoon,” Kate says.

The flexible milking routine was started by her parents when they bought the farm 27 years ago.

With five daughters, family life was busy and neither parent wanted to miss out on what their children were doing.

The farm, near Fortrose, is one of the most southern dairy farms in the country and is a mixture of sand dunes and peat swamps with a 200-hectare milking platform.

About 270 cows calve in spring and another 180 in the autumn and the relaxed lifestyle suits the cows as well as the family, something Kate and Reuben are planning to continue.

Kate went to school in Invercargill and graduated from Lincoln University with a bachelor of agriculture commerce.

There she met Reuben who was studying a diploma of agriculture and a diploma in farm management. He was a Christchurch boy but was working on sheep farms.

Back home, playing rugby and netball keeps her busy and the morning milkings let her and Reuben get out in the boat on calm afternoons off the southern coast, launching off the beach from the farm.

“We go get paua and do a bit of spear fishing, just with snorkels.”

Working as an AB technician for LIC helps with the finances and lets her have a look at other dairy operations.

After her first season as an apprentice, her run now takes her to nearby Mataura Island and on to farms she had never been to before.

“With Nikki I knew everyone because they were all the neighbours but that first year by myself I was pretty nervous.”

She says getting on with farmers is half the job and good relationships make sure the cows are ready for her when she arrives.

“If you have to wait 20 minutes or so while they are getting the cows in it really slows up your morning and then you are late getting to all the other farms on the run.”

On most days she’s clocking up 150km, travelling from farm to farm with two liquid nitrogen banks, trying to juggle times to work in with everyone.

“It can be a real challenge to be there when people want you. Someone always ends up going earlier or later than they’d like, just because of where they are in the run.

“I’m really lucky all of my farmers are really good and understand.”

She hasn’t had to do yearling mobs yet but synchros keep her busy and it is nothing for her to walk into a dairy and there are 40 to 50 cows ready for her do.

“I’ve learnt that the longer you stay in the cow the harder it gets to inseminate it. They tense up inside. If I get a really difficult one I usually leave it and come back to it.”

Calm cows are always the easiest.

“It doesn’t take much to stress them. You really notice how people rushing around or yelling or turning on a hose can really make the cow tense.

“Cows like it to be quiet and everything relaxed.”

She admits she now treats her own cows differently in the dairy, keeping things as calm as possible when milking and inseminating.

“Some of the races aren’t great either. You seem to be always dodging poles, trying to get the right angle or the bar is right where the tail is.

“It just makes it so much harder to do the job.”

It has got easier in the past year with LIC developing a national standard for AB facilities and carrying out checks nationwide to ensure technicians are working in a safe environment.

“It’s not only about us staying safe – it also means the cow is safe and there is the best chance to get it in calf.”

The race where she inseminates her own cows was built by her father and has no upright poles and the back rail is low and not in the way.

“It’s perfect. Farmers just don’t realise how hard it is when the cows are unhappy and there are poles in the way.”

As well as loading the straws and inseminating the cows, data entry on an iPad is also part of the job.

Cows’ numbers and the bull they are about to be mated to are entered and the database shows if there will be a problem with inbreeding or recessive gene disorders so another bull can be chosen.

“Getting cow numbers right is really important and tags that are hard to read just makes everything harder.

“And the first year with Nikki the cell phone coverage was really patchy on the run and we were always trying to find places where we could download the bull codes on to the iPad but we managed it. Now the cell phone reception is a lot better.”

She enjoys seeing what other farmers are using for sires and how they manage their herds.

On the home farm she inseminates their top BW cows with the best dairy bulls but everything else goes to Hereford or Charolais and in the winter all the cows go to Charolais.

The resulting 70 high BW calves get sold at weaning as do most of the beef crosses, although Kate’s dad takes about 50 to fatten on the farm’s rougher pastures. A Charolais cross weaned calf fetches $550, making it a successful equation.

For their own replacements they buy in empty, carryover cows still in milk.

“If we raised our own calves, that’s two years you’re feeding them without anything back.

“By buying in empties, we still get three or four months milking out of them and then we get them back in calf.

“We buy high BW cows so the only problem is to source them we usually have to go to five or six farms to get the 70 cows so it is a biosecurity risk. So far we’ve been okay.”

Their own empty rate this year was 8%, showing that carryover cows still get in calf.

“That’s probably because they have it a lot easier on once a day milking here.”

With no bulls on the farm, Kate inseminates all of the summer and winter herds and finds the winter herd, mated for two cycles from July, keeps her in practice for when she starts her run in mid-October for LIC.

“You do forget how to do it and that first cow each season is always a bit nerve wracking but then when you put your hand inside it all comes back to you. A bit like riding a bike I suppose.”