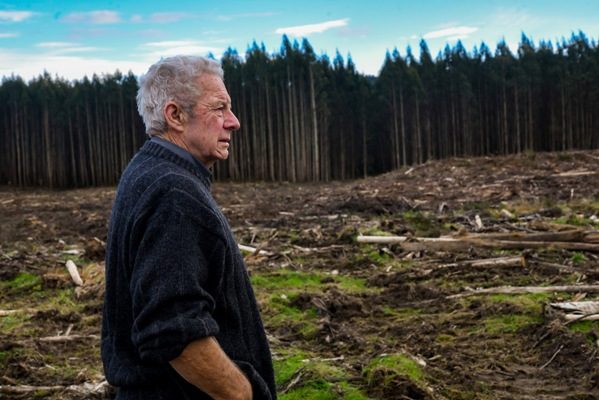 Forestry has ripped the heart out of a small Southland community.

In the mid-1990s Waimahaka near Wyndham was one of a number of areas where farms were sold and planted out in eucalypt trees.

It was good money for those selling but the three-teacher school was the heart of a thriving community both of which were devastated.

Waimahaka school had a roll of 70 and three teachers before the trees came. When the farms sold the families left the district. It had only four pupils by the time it closed in 2013.

The land was bought by Japanese-owned company, Southland Production Forest. It was a perfect time for the Japanese investors to buy land as farming had staggered out of the 1980s and Rogernomics. Farmgate prices were low and banks weren’t keen on lending money to farmers to buy more land.

Also the New Zealand currency was low. With the dollar 40c to the United States dollar, Southland Forest Products could afford to pay $2000/ha, well above the going rate of about $1850/ha.

All together it bought up 10,000ha of farmland in the Southland and south Otago region.

A committee called Sustainability of Rural NZ was set-up by a group of farmers to fight the loss of farmland. Ken Buckingham (76) was in the thick of it. Local MP and cabinet minister Bill English was invited to a meeting at the Tokanui pub but was indifferent to the loss of farms. He told them the market would decide.

In fact the most support they got was from Greens leader Rod Donald who came to see what was happening and took their case back to Parliament.

At the time the National Government was keen on getting overseas funds into the country and why the locals believe they turned a blind eye to overseas investment rules being breached.

Ken says the Overseas Investment Commission was given false facts and the land sales only met two of the five criteria. The Government was so keen for overseas funds it rubber stamped it.

“We knew foreign investment was needed but not when it devastated the local population.”

They were told it would be a 15-year rotation but after 20 years many of the gums are still standing.

There is an eerie quietness about the walls of wood. No animals, no tractors or farm bike noises.

Old farmers must almost weep when they pass the eucalypt forests which grow on prime farmland.

In the mid-1970s and 1980s a lot of taxpayer money went into converting land from bush into pasture.

Ken says the Tahakopa Valley in Otago (close to Southland) was all farmland but is now in gum trees.

“The gums have devastated rural populations.”

Remaining farms with trees growing along the boundaries are difficult to sell. Even without trees selling is difficult with three farms in the district recently failing to sell.
He says when SPF came into an area it bought the best farm first which created a domino effect.

Tokanui farmer and a relation of Ken’s, Tom Buckingham says the gums had a huge impact on Tokanui with 35 houses shifted out of the area. Since then only three locals work with trees, the rest is done by contractors outside the area.

Tom wasn’t keen on having gum trees as neighbours and at the time wondered where the plantings would end. He isn’t surrounded by trees but they are not far away.
Now people like Ken and Tom are worried it is all about to repeat itself again in Southland this time with pines. The region is served by good growing conditions, infrastructure including an easily accessible port.

They don’t want to see any more communities disappear.

This time it will be more difficult as farm prices are buoyant but the $25/tonne for carbon credits and the prospect it will rise is driving blanket plantings which Ken says is wrong.

He says local government did nothing to stop the gum trees as it was a permitted activity.

So too did Jean Fallow’s. She was also on the committee and only moved out of the district four years ago. She says the loss was hard as the school was the hub for the community. Clubs and groups used to meet at the school. The community now meets in the hall but the depopulation meant there are not enough people to run the clubs and services.

“The local garage is still running which is good for farmers.”

A central, not a local issue

Ken Buckingham says she is passing the buck because the Government’s policies are driving the planting.

The committee has long since been wound-up, but they recently decided to help fight the blanket planting of pine trees for carbon credits by donating surplus funds to the lobby group 50 Shades of Green. There was still $2500 in the committee’s bank account or so they thought. But the bank had wound the account up and given the money away to a charity. They are looking into it.

Subsidies were a dirty word in the 1980s when they were taken away from farming. Farmers like Lindsay Broad, another committee member, and Ken were told everything has to stand on its own feet.

“Now there are subsidies for tourism and planting trees,” Ken says.

A lot of the land would have been turned into dairy farming if forestry had not got there first.

Lindsay says it would have been a very good dairy farm.

“Actually bugger the dairy, it would have been a very good sheep farm finishing lambs.”

In winter the logging trucks cut up the roads and the district council has stopped them.

Ken says the sun is lower in the south during the short days of winter. There used to be a local government rule that trees couldn’t be planted too close to roads. Trees were not allowed to shade the roads from 10am-2pm.

Southland District Council was so keen on planting its own forests it relaxed the rule, he says.

The loss of farms to trees means the council is missing out on rates.
Ken’s research found forestry was paying a higher rate/ha on the land, but less in capital value. When the forestry company bought a farm they gave the house and infrastructure to the farmer to sell off.

Locals say one the worst features of the eucalyptus forests is the lack of labour employed with their management. In two weeks the ground is sprayed off, planted out and left to grow until they are cut down.

“At least with pines there is pruning and thinning, Ken says.

Eucalyptus trees are not being harvested within the 15-year rotation because not as many are needed, Southwood Export general manager Graeme Manley says.

Southland Plantation Forest (SPF) forests are managed by Southwood plus other forests. Both companies are Japanese-owned. SPF trees go to Southwood’s mill in Invercargill to be chipped for the manufacture of high-grade paper.

Manley said they were doing some harvesting at Waimahaka and 340,000 tonnes of wood a year was processed at the mill.

The trees are not in the Emission Trading Scheme because it was decided it suited a longer rotation.

“We will review that.”

Manley said the forests are spread around primarily to lessen the impact on local communities and due to the land that was for sale.

A report into the planting of the gum trees in the Catlins and Southland region was prepared by Lincoln University’s Agribusiness and Economics Research unit. It investigated the social impacts of land use change from farming to short-rotation forestry in Southland, analysing the employment and financial changes.

Some of the Overseas Investment Commission (now the OIO) criteria was met, but overall the forestry investment did not significantly contribute to the national interest, it said.

Forestry resulted in the number of jobs dropping from 50 to 37 while value added rose from $2.3m to $3.3m a year. On-land employment dropped by 16 full time equivalents, 19 until logging started at 15 years. The report said the loss in jobs can have serious social impact in rural areas.

While the drop in employment seems small it was a significant proportion of the rural population.

Forestry investments in the Catlins region are not creating new job opportunities nor significantly improving the value added from its land use.

The report, carried out in the late 90s and revised in July 2000, was commissioned by Sustainability of Rural New Zealand which was set up by locals to fight the loss of prime farmland to gum trees. Since then farmgate prices have risen significantly.

Manley said most of the work is carried out by contractors. There are 10 harvesters contracted six forwarders and two loaders. Between 50-65 truckloads a day cart logs to the mill and a similar number transport the chip to the port. The mill employs six people and another two work at the port.