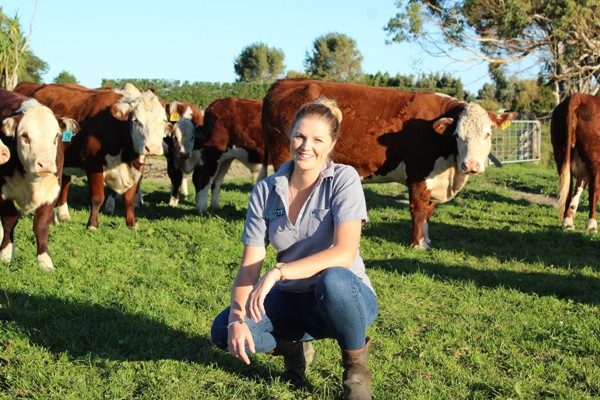 Hereford cattle were part of Hannah Gibb’s life growing up in the Manawatu, but she’s now learning the ropes of a big Australian wagyu operation. Cheyenne Nicholson reports.

It’s not easy packing up your life and moving to another country, but Hannah Gibb says it’s all part of reaching her goals and supporting the New Zealand red meat story.

Hannah grew up in Feilding and spent many of her weekends and school holidays at her grandparents, Mike and Lorraine Langtry’s, farm just out of town. The Langtrys’ polled Hereford stud became a massive part of Hannah’s life.

“I was gifted my own stud heifer on my birthday and from there my own little herd of cows grew. My grandparents were always heavily involved in showing cattle at local shows, so this also became a love of mine.”

When her grandparents downsized their farm and dispersed most of their herd, Hannah kept her small herd going. She shared the herd with her cousin and Hannah took a lot of responsibility over the breeding and management decisions.

‘When I arrived here a month ago, they were in the middle of a drought and doing it pretty tough. I spent my first few weeks helping de-stock Collie Blue because of the dry conditions.’

She sold her own bulls at the National Beef Expo (now known as the National Hereford Sale) and was involved in a lot of the day-to-day running of the farm, all while studying full time at Massey University and working two part-time jobs.

“Grandad passed away two years ago, and we made the family decision to sell the little block they had retired to and sell the remaining cattle including my own.”

It was a tough decision but one that proved the best for the entire family.

“It allowed me to be open and flexible for new opportunities and adventures in my life and career.”

And that’s exactly what has happened. Along with graduating Massey University with a Bachelor of AgriScience, Hannah is an RAS Qualified Associate beef cattle judge, won the 2017 Allfex NZ Senior Beef Ambassador at the Future Beef NZ Hoof and Hook competition and has worked for the NZ Hereford Association and even worked on a large Clydesdale stud in the South Island.

Amongst all that she found the time to travel to Europe and Australia in 2018 during which she found the opportunity of a lifetime. In Australia she stayed with a Hereford breeder whose daughter had just started the graduate programme with the Australian Agricultural Company (AACo).

AACo was established in 1824 and is Australia’s largest integrated cattle and beef producer and is the oldest continuously operating company in Australia. It owns and operates a strategic balance of properties, feedlots and farms making up around 7 million hectares in Queensland and the Northern Territory.

Specialising in grain beef and wagyu beef production it is a unique company that controls every element of the supply chain.

“When they told me about it, I realised it was right up my alley and something I seriously wanted to consider applying for in 2019. It took my interest largely because NZ doesn’t have a company that comes even close to AACo. To work for a company that controls all aspects of the supply chain is an incredible opportunity.”

She visited the AACo site during Beef Week and found out more information about the grad programme.

“I basically flew home late May, graduated university and applied as soon as applications opened in July. I was fortunate enough to get a phone interview in August, followed by a request for a face-to-face interview in Brisbane in September.”

Hannah was offered one of the three graduate roles in October and made the move across the ditch in late January to start her new role in February.

Her job involves four months at several placements on different AACo stations and feedlots over a total timeframe of 18 to 24 months.

Because of her interest in breeding and genetics, AACo has tailored her grad programme to place her on properties relevant to this area. Her first placement is Glentana Station, 100km south of a small town called Springsure.

“Glentana is a 15,000ha property and they also lease the neighbouring property called Collie Blue which is an additional 17,000ha.”

The combined properties breed and grow commercial purebred and full-blood Wagyu cattle to feedlot entry weight, about 320-380kg with the aim of delivering 2000-2500 feeder cattle to Aronui Feedlot, the oldest commercial feedlot in Australia established in 1964.

In a typical year Collie Blue runs about 2500 purebred wagyu cows and Glentatna runs between 5000 and 7000 head. Glentana carries 500 full-blood wagyu cows which provide geographic biosecurity ‘insurance’ for the Wylarah Westholme herd. The Westholme wagyu herd contains the most highly credentialed wagyu cattle to ever leave Japan and are a bred on AACo’s Wylarah station near Dalby, Queensland.

“When I arrived here a month ago, they were in the middle of a drought and doing it pretty tough. I spent my first few weeks helping de-stock Collie Blue because of the dry conditions.”

Since then several storms have meant the property is starting to green up again and the recent rain has meant they can keep the remaining cattle on the property.

“I have learnt a lot in a very short space of time. Aussies do things differently to us.

“Not only is the landscape, the climate and the cattle and vegetation different but so are the farming systems and management styles. Even terminology and phrases they use for things has taken me a while to get used to.”

Hannah has spent her first month honing her skills and learning new ones. From fencing, mustering on horseback, branding weaner calves with a hot iron through to operating and fixing machinery, tools and equipment. She has become familiar with the animal health and traceability systems and programmes used by AACo, learnt how pumps work and ‘everything else in-between’.

The days are long, sometimes up to 14 hours but she loves every second of it.

“It’s an incredible opportunity to place out on a station and learn how it operates from the ground up and where the supply chain begins.”

She says the opportunity to work with Wagyu cattle, especially with the breeding and genetics work Glentana is doing with polled wagyu is a rare opportunity she’s excited to experience.

“The company frequently run trials and projects that I can be involved with. Most recently a pain-relief trial was completed here. I got to see the end results and help analyse data. It is exciting to be in a position where I can contribute to innovative projects and initiatives going on within the company that could create positive changes within the global beef industry.”

Although she eventually hopes to return to NZ one day, she is planning on staying in Australia for the near future, making the most of the opportunity of working for AACo.

“When I graduated university, my ultimate goal was to work for a company where I could be involved with and contribute to a beef supply chain, from genetics through to processing. I am so fortunate to currently be in a role that allows this.”

Long term, Hannah says she’s extremely passionate and has a committed goal of supporting NZ’s red meat story and is enthusiastic about growing, suppling and marketing NZ’s grass-fed beef and hopes to spend the next few years building the knowledge and skills she needs to return home and positively contribute to NZ’s beef industry and red meat sector.

“I think NZ’s red meat story is a critical initiative to raising awareness, educating our global consumers and securing NZ’s position in the global market to ensure open and consistent trade for the future.”

On a personal level, Hannah says she also has plans of establishing a Hereford stud once again.

“Hereford cattle will always hold a special place in my heart.”