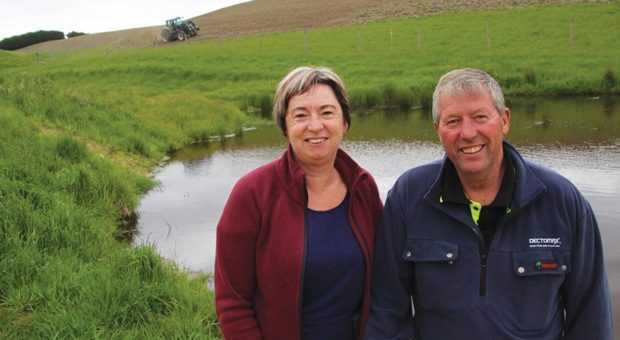 Michelle and Tony Roberts always planned to tick-off a wetland development on their Merino Downs farm.

However, getting input from fellow members of the Southland Environmental Advance Party (SEAP) fast-tracked the project and led to a better result.

“We got a helping hand in a lot of areas and it’s given us knowledge that we can now share with others,” Tony says.

SEAP members chipped in with advice which in some areas changed the Roberts original thinking for the better.

“I thought we needed to make the wetland ponds deep and large until it was explained that smaller and shallower ponds are more effective in capturing the nutrients and let the sunlight in to kill E. coli,” Michelle says.

They also changed their thinking from purely native plantings to inclusion of exotics after visiting other SEAP farms. These visits also led to a rethink on the fencing of the project area which changed from the edge of the wetland to a wider area along a ridgeline to protect a steep hillside from deer.

The Roberts decided to make a wetland development their chosen SEAP project in April 2018. Group members were quick to come forward with practical advice and help, including Environment Southland’s environmental sustainability officer David Moate. His advice was invaluable given his familiarity with council regulations, he helped source some funding, and worked out estimated costs and the construction details.

“He had some really useful and practical insights and we’d advise farmers and other farmer groups to work in with their local council. He’s been very supportive to us but is also learning from our group the problems that deer farmers face so it’s a two-way learning thing,” Tony says.

The farm has several spring-fed waterways originating at the top end, which flow down through hills and gullies before exiting the property. All the flowing waterways are fenced to exclude stock and wetland areas are being developed and improved to capture sediment and filter out nitrates and phosphorus.

The development cost of the SEAP project wetland of about $14,000 includes the cost of fencing; construction of two sediment traps; trees and plants; plus associated tractor work and labour. A further $12,000 was spent on other environmental initiatives extending beyond the deer farm which have reduced run-off and created a more visually appealing landscape for future generations to enjoy.

“It’s not only about water quality it’s also about enhancing the visual appeal and biodiversity on the farm,” Michelle says.

Ticking off construction of the wetland has been satisfying but the Roberts say there will be ongoing maintenance, as well as other water quality aligned developments.

They are mulling over the idea of a tiered bund pooling system of small, low-walled, shallow dams to reduce the speed of water flow in critical source areas as well as to capture sediment and nutrients after heavy rain. The idea and potential of bunds was discussed at a SEAP visit to Invercargill environmental consultancy Land & Water Science.

Beyond developments on the ground they have also been fine-tuning winter management, taking care to select paddocks for winter crops with generous pasture swales to capture and filter run-off. They’ve changed how they feed winter crops to deer. Daily strip-grazing moving down the hills will be replaced by multiple-day block grazing in the hope that the deer will be more settled and less likely to jump over fences.

They are gearing up for the indoor wintering of hinds and weaners by adapting existing sheds on the farm. The move will incur extra cost but will reduce the number of paddocks in winter crop, saving more for spring grazing and should mean “happier deer and happier people,” Tony says.

Dairy to deer and cattle

The Roberts’ move to deer and cattle farming followed 25 years of dairying at Crookston near Tapanui.

Tony had a history of dabbling in deer; he and his father established a fallow herd back in the early 1980s. His interest in the breed grew and led to establishment Top Deck Deer, a fallow breeding herd supplying bucks to safari hunting businesses.

As well as fallow, the Roberts also had a few Red deer on a 25ha fenced area on a dairy support run-off area. It got to the point where the family was keen to take deer farming to the next level and they jumped in boots and all in 2017. They bought two properties: 80ha already deer-fenced and an adjoining sheep and cropping block where they deer-fenced another 60ha.

The development and step up to commercial scale deer farming has been a challenge they’ve enjoyed.

“We came into it with an open mind… we’ve made mistakes along the way but learned heaps,” Tony says.

Tony and daughter Kate do the day-to-day farming leaving the admin side to Michelle. Tony and Kate work together both the deer and cattle, although Kate prefers the cattle side. The Roberts have been concentrating on improving the genetics of the deer through AI and bought-in stags, and this year are cutting velvet from their first homebred two-year-old stags.

After almost three years of full-on development they are looking to consolidate both the deer and cattle operations, and options to further improve profitability.

The Roberts’ dairy farming discipline and background is reflected in their approach with deer. Recording is something they always did on the dairy farm and they’re doing that with deer using the Gallagher APS system to keep track of parentage, backed up by DNA testing; and velvet information.

“For us it’s all about getting the information so we can make the right decisions.”

Gallagher APS is used for all the weights and pedigrees while FarmIQ is used to keep track of almost everything from crop rotations, sprays, NAIT, paddock history, fertilizer and inputs.

“We’ve found it really useful, particularly during the development phase of the farm.”

Local council regulations and a proposed further layer of government-driven water quality regulations are causing some farmers to wait it out rather than act.

“Some appear to be sitting and waiting but there isn’t the time to wait,” Tony says.

Their advice on how to get started is to get advice from local council staff who are familiar with water quality regulations. Also, talk to other farmers who have or are undertaking water quality enhancing projects.

Effective environmental mitigation is about constantly chipping away, as the Roberts are doing, David Moate says.

As a start, farmers could look at best management practices to solve particular water quality or environmental issues, and if that didn’t work then look at mitigations such as a sediment trap or wetland.

But in making that decision thought had to be given on exactly what the mitigation was to resolve and where best to locate it.

“For Tony and Michelle, the gully system flattened out to a natural boggy wetland area, so it was a logical place and has also been developed with minimal disruption to the system.”

An effective wetland area can be constructed with a good digger operator for $2000-$5000, Moate says.

The Roberts will have to maintain and clean out the wetland, and a next logical step would be fencing off the entire gully system to keep deer out.

“Deer love to mess up waterways so they are a challenge when it comes to water quality.”

The award acknowledged the groups strong and enduring relationships which contributed to positive outcomes on and off farm, and the “honest and frank” conversations which led to better management overall.

For the Roberts, visits to their farm by the group have been a great way to get fresh thinking and new ideas on aspects or issues they’ve struggled with.

Michelle has stepped up involvement in the environmental space on selection for the Southland Regional Forum. She is one of 15, a mix of people across the community with farming, environmental, industry and tourism backgrounds. The job of the group is to feed back to Environment Southland the aspirations, values and objectives the community has for the region’s waterways and land. “It’s a structured process and we have access to a lot of useful data which has helped broaden my knowledge about water quality.”