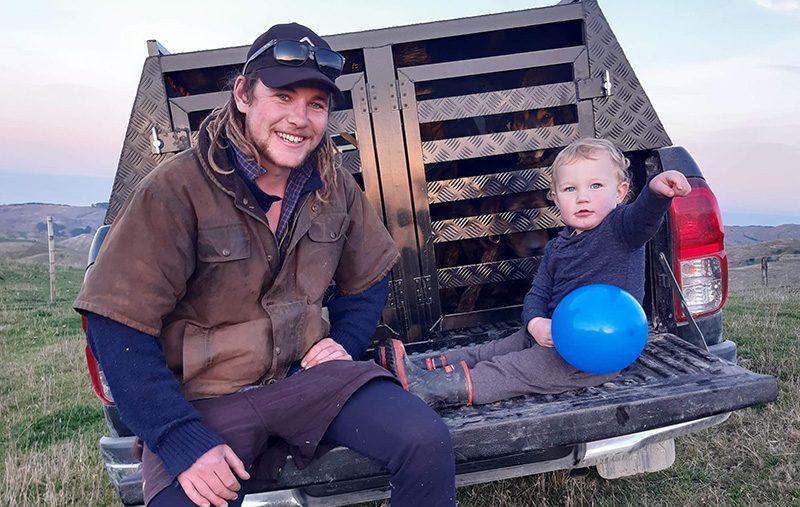 Demonstrating a high level of personal drive helped Joe McCash over the line in a Hawke’s Bay shepherd competition.
Combined with his experience across multiple farming systems, it set him apart from other competitors to win the Rural Directions Hawke’s Bay Shepherd of the Year competition.
Joe, 25, has been shepherding at Te Aratipi Station, a sheep and beef farm in the Maraetotara Valley, near Waimarama Beach, in Hawke’s Bay for 18 months.
Employed by Ed and Ro Palmer, Joe is focused on the stock side of the business. “I’d say it’s 90% stock work, all the handling, rotations, general yard work.”
Also living at Te Aratipi with Joe are his partner Danielle Rose and two young sons Jake, 2, and Max, 2 months.
Growing up on a farm in Patangata, Central Hawke’s Bay, Joe always knew he wanted to make farming his career. He might not have finished his Lincoln University diploma in agriculture, but this has not been an obstacle to success. Instead, a good work ethic and passion for the industry have stood Joe in good stead.
After successive droughts, his parents decided to put their farm at Patangata on the market and, one week after starting his first full time job as a shepherd, it was sold.
Joe’s first job was on a bull fattening and breeding farm in Pahiatua. After two years he moved to a steep breeding block near Makuri. “I did a year there and thought I’d try something different. I went to a major lamb fattening farm at Hunterville for two years. I got a bit of responsibility there organising some staff and having a shepherd under me, but it wasn’t for me. I wasn’t really enjoying the straight fattening side of things.”
The realisation that breeding was his passion, seeing your own progeny doing well, rather than trading stock, brought him to Te Aratipi.
“I’ve always wanted to farm, it was always the plan. I just like the lifestyle. Growing up as a kid on a farm you appreciate what’s around you, and just seeing stock do well. I enjoy the country life.”
Now, he’s relishing being able to give his own children that same experience. “Jake has the same sort of passion, he’s obsessed with the farm and comes with me a lot. He was up at 6am this morning to go get the woolshed ready for the shearers – he’s right into it.”

Rural Directions manager, Gretchen Parkes , who judged the competition, along with farmer Danny Angland, said they were impressed with the high quality of this year’s finalists.
Joe has demonstrated a solid track record in shepherding across multiple farming systems. He is focused on building his career towards higher achievements in the industry and he is grounded and focused in his personal life also.
“He has put good building blocks in place and shows good personal drive.”
With an ultimate goal of owning land, Joe’s aim is to move up the ladder in his next job, to stock manager.
“Owning land is a big step.”
He wants to lease land to get started and build his own dagging trailer and operate it. The dagging business could boost his income.
“The ultimate would be to lease to buy, but initially lease to build equity.”
This was his first crack at the Shepherd of the Year title, though he had previously considered entering the Tararua or Wairarapa competitions, and he was “stoked” to hear his name read out as winner.
“(For) my next job I don’t want to be just a shepherd, so I talked to Danielle and she said go for it.
He signed up for the competition on the last day.
“I’ve always wanted to have a go at one.”
He had a couple of mates win it before and they have both jumped into managing jobs since.
“I do think it’s a massive thing to have on your CV.”
One big plus for Joe was competition judge Danny Angland encouraging him to look into taking a free online course on farm management, something he is planning to take up.