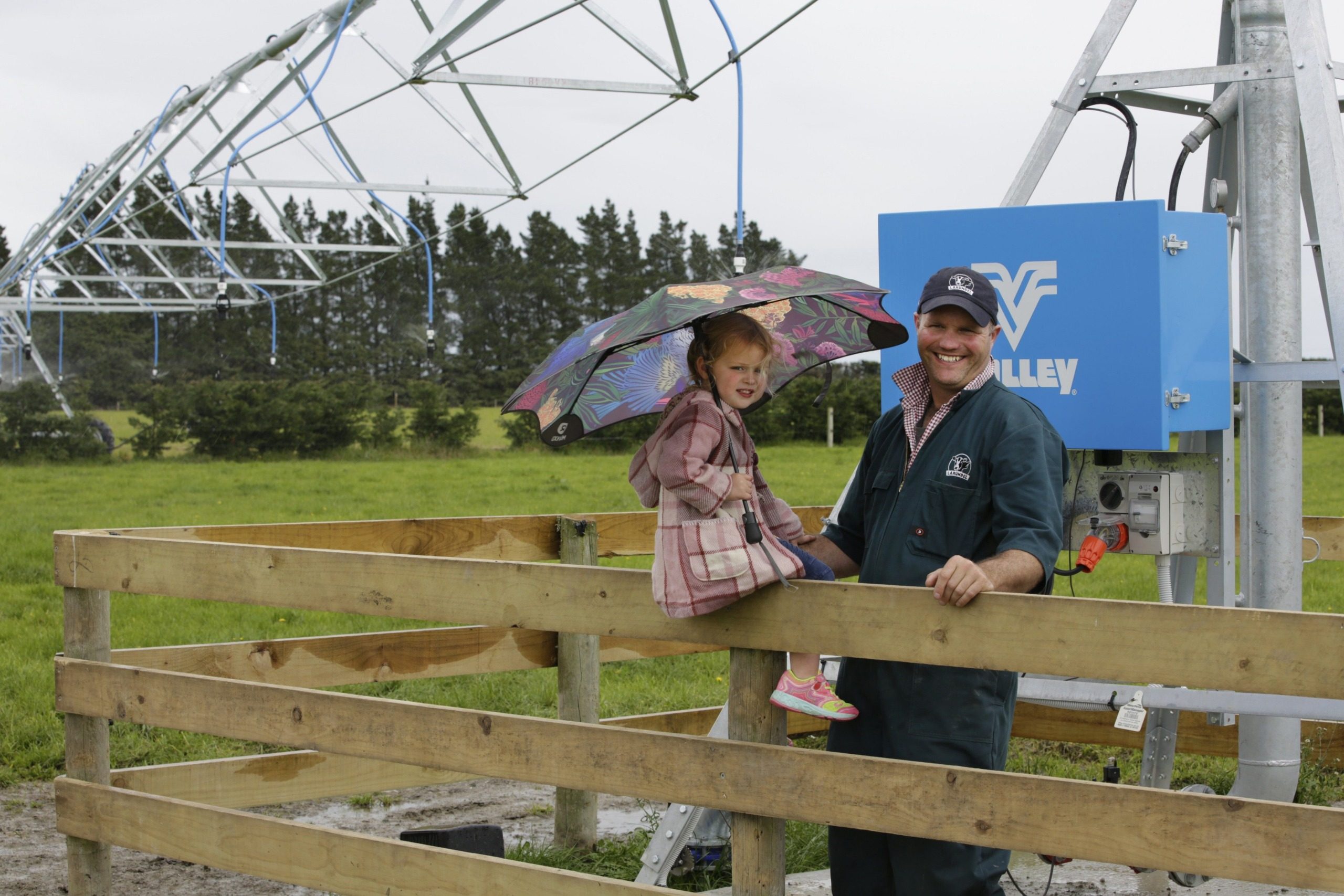 Getting the most out of every drop of water is essential for Canterbury farmer Ben McKerchar. Anne Lee took a tour of his irrigation system.

When that resource can be the biggest single driver of profit and environmental sustainability the case for investment into improving its efficiency can be a mighty strong one.

For Larundel Dairy Partnership’s contract milkers Ben and Tracy McKerchar, water is that resource and while it’s not necessarily scarce it’s not guaranteed to be on-tap, in full flow every day of every season.

The 625ha operation, which includes 390ha of owned land and 235ha of lease blocks, is half-way along Tram Road on the north bank of the Waimakariri River.

Larundel taps into the Waimakariri Irrigation Scheme – a run-of-river scheme currently going through what’s proving to be an arduous process of attempting to get consent to build large scale storage at the top of the scheme to improve reliability.

The run of river nature means the scheme can be prone to restrictions, limiting and cutting the flow of what is essentially the lifeblood of pasture production.

Before the scheme Larundel drew groundwater from bores and, while it surrendered some of those consents when it joined the scheme, it’s retained two takes for the home block and maintained the connection to mainline infrastructure.

That allows enough water to fully irrigate 60% of the farm but in reality they move it around the farm and will play catch-up in some areas when restrictions are lifted.

They can also draw on limited bore water on some of the lease blocks, although two have no backup.

Managing the water resource and getting to the point where pasture production and profitability aren’t unduly penalised in a hot, dry, water-tight year has been about improving and investing in water infrastructure.

Eking out water use efficiency to take out wastage and having machines and systems in place to put water on where and when it’s needed in just the right amounts has been key to the farm’s continued improvements in productivity and profitability.

It’s well proven that pasture eaten has the strongest correlation with profit and, with Ben a proven utiliser of pasture, every extra kilogram of drymatter (DM) he can grow has an influence on the bottom line.

It’s not just his and Tracy’s business that benefits, it’s their farm owners and even the owners of leased support blocks.

The farm was converted in 2001 and was well set-up with three pivots that irrigate 300ha of the 360ha milking platform area.

The lease blocks were a mix of Rotorainers, big guns and K-line sprinklers. Now 180ha of the 235ha support area is also watered by pivots.

In one case, the upgrade was carried out and paid for by Larundel and in two others the lessors have made the investments and increased the lease rate.

Since 2011 the process has meant six new pivots on support areas including three small pivots and fixed grid sprinklers on a 25ha block of adjoining land the farm partnership bought last year.

They replaced a Rotorainer on a 10-day return interval that would have been putting on about 50mm/ha at a time – well beyond the soil’s water holding abilities.

Pivots can put on as little as 5mm/ha over a larger area every 24 hours.

“We start from the analysis of how much extra feed we will grow and the return on investment we think we’ll get.

“We’re relatively conservative when we do that but we know (from experience and close pasture and crop monitoring) that we can get an extra 5t DM/ha if we go to pivot irrigation from long lateral sprinklers or K-line. It’s about 3.5t DM/ha from a Rotorainer.

“When you put 22c/kg DM on that extra feed grown the return on investment stacks up no end,” Ben says.

On one lease block a pivot covering 54ha replaced a Rotorainer on a 14-day return interval and in 2015 K-line on a 50ha block was replaced with a pivot which covers 46ha.

In 2016 a Rotorainer on a 12-day return interval was replaced with a pivot covering 76ha.

Getting the lessors on board has typically been a matter of working through the numbers with them and striking an increased lease payment rate that then gives them a good return on capital of 8-10% but still leaves room for Larundel to capture gains too.

All of the costs of the upgrade including any re-fencing, corner sprinklers and power installation along with the cost of the new pivot are included in the analysis on the lessor’s side.

On the farm’s side the analysis will put a value on the expected lift in feed grown as well as savings in repairs and maintenance (lower tractor costs if going from a Rotorainer), labour and power savings

Ben says the analysis is based on realistic figures with the increase in lease set to give both parties a fair share of predicted returns.

The same or even greater depth of analysis is used with all investment and management change decisions, including a shift a couple of years ago to being more self-contained.

“The ability to use water more efficiently and grow more drymatter – whether that’s pasture or home-grown fodder beet – has meant we’ve been able to become more self-contained, wintering cows ourselves on those support blocks, rearing all our own youngstock and cutting silage.

“It’s meant we’ve been able to do that profitably so we’ve taken a lot of risk out of the business,” he says.

The system change has cut 44c/kg milksolids (MS) of costs out of the budget and when milk production is budgeted at 650,000kg MS that’s a significant saving.

Over the whole farm, Ben says the irrigation changes mean they can grow 2.5t DM/ha more each year.

If the whole operation was still with its original irrigation set-up Ben estimates he’d require an additional full-time staff member.

“Not having to physically get out there and move irrigators all the time means people can be doing more productive things with their time.”

Having the right infrastructure to maximise water use efficiency is one thing but knowing when to apply the water to ensure only what’s needed goes on at a given time means soil moisture monitoring is a must.

Ben says they’ve always used it but they’ve recently increased the number of soil moisture monitoring sites to seven from three and use Regen to manage the data and make irrigation scheduling suggestions.

Waimakariri Irrigation holds the consents for its irrigators and as part of its compliance and proof of good management practice it requires irrigators to use the Regen system.

Both Ben and his 2IC, Matt Suckling, can use the app on their phones and the log-in site on PCs.

It’s only been installed in time for this season but so far Ben says he’s been very impressed with what it can do and how they can use it.

Irrigation gets a bad rap from interest groups and the general public but Ben says technology can mean irrigated systems can do even better than non-irrigated areas.

“What we have here is the ability to manage soil moisture and drainage down into the groundwater a lot better than those who rely solely on rainfall I think. We’re only getting 600mm of rainfall a year and we apply the other 600mm little and often so we don’t get drainage.

“If you’re getting 1200mm of rainfall a year you can bet some of that’s coming in 30mm, 50mm or even 80mm events that you have absolutely no control over.”

Larundel has also added effluent monitoring and scheduling to its Regen package to go alongside a significant investment in the effluent system.

Each morning Ben receives a text that will tell him whether soil moisture conditions are right to apply effluent or not.

The system can also let him know how full the storage tank is.

“We’re very driven by return on investment and profit but hand in hand with that, when the board’s making decisions on investment, is the effect on the environmental footprint – what effect will a spending decision or change in way we do things have on our farm environment plan, what will it do to our nutrient losses?”

“Getting that wrong is a big risk to the business but getting it right is also just the right thing to do,” he says.

Last season they were plagued by a 17-year-old pivot rusting out and blowing holes in the metal structure.

It was also the pivot the effluent gun was attached to. It was underslung and manually repositioned along the pivot.

“It didn’t give us an even spread in the paddock. The nozzle is the same no matter where it’s sitting on the pivot so there was a higher application rate when it was at the middle of the pivot.”

The new system is underslung too but the effluent is sprayed on at regular intervals through nozzles set specifically to give a uniform distribution, so from an application depth of 12mm-plus with the gun the system now evenly puts on up to 5mm.

Back at the farm dairy the system has undergone an extensive upgrade too with a larger concreted apron, new concreted wedge, concrete pond and a solids press effluent separator.

The system feeds into a Humes Tank installed six years ago with enough storage for 20 days.

Solids are stored on a concreted bunker with a weeping wall, allowing any further liquid to drain back across to the concrete storage pond that holds the effluent before it goes through the separator.

“The next step is to test the effluent we’re putting out so we can combine that with our soil test results and be even more precise with our fertiliser and nitrogen use.”

Investing in upgraded infrastructure, whether it’s to apply water or effluent, will give a win-win return in productivity and environmental outcomes, he says.

“Too often people see it as just compliance but we know you get both.”

In Canterbury all farms must be operating at good management practice as defined and agreed by Environment Canterbury and farming sector groups.

Those who don’t will be picked up when their farm environment plans are audited and could risk breaching their consents.

That’s the stick but Ben believes farmers also respond to incentives and for those who have invested heavily in infrastructure and systems and go beyond good management there’s a great story for Fonterra to be leveraging off in the market place.

Irrigation: Nine pivots, one gun and 30ha of laterals

vamtam-theme-circle-post
 Category Dairy Exporter
The next generation of farmers won’t have capital gains opportunities, so will have to focus...
 Tags Environment, Systems
Read More

Time to invest wiselyMaking the most of a challenging climate