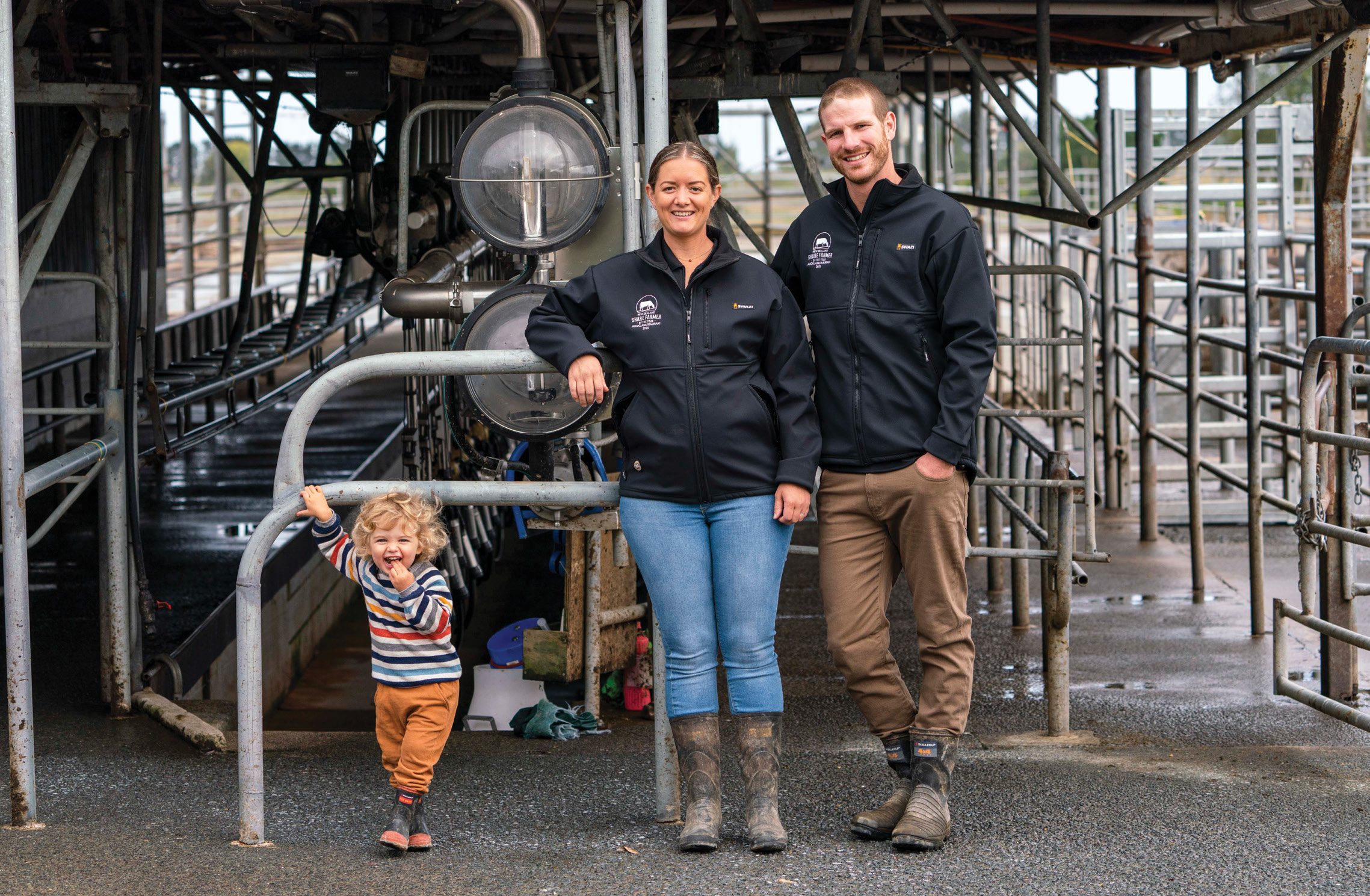 Entering the Dairy Industry Awards has shone the light on progression opportunities for equity farm owners Brendan and Tessa Hopson.

They are three years into their five-year contract with equity partners, Scott and Alicia Paterson and Stuart and Kaaren Davey. Going through the competition has encouraged Brendan and Tessa to do their figures on their options for what happens at the five-year mark, Brendan says.

“We have our business partnership, but we also have our own business goals as well, sometimes it’s hard to distinguish between the two. This process showed us what was good for the equity partnership long term, but also what is best for us.”

Brendan and Tessa both grew up on dairy farms in the Waikato, Tessa’s parents still farm 600 cows just around the corner at Paeroa, and Brendan’s parents have just sold their dairy farm at Tirau.

“Growing up on a dairy farm and going to school, I was much more interested in the practical side of things,” Brendan says.

“If it had been up to me I would have gone farming after I left school but I decided to get a trade.”

Brendan completed a building apprenticeship in Hamilton, where he met Tessa who was studying a Bachelor in Tourism Management at Waikato University.

They travelled and worked for the next five years overseas, lived in Western Australia for a year, then travelled around America, Europe, Africa and Asia.

When they got engaged and made the decision to move home in 2015, Brendan had lined up a job through family friends on a dairy farm at Te Awamutu.

The System 5 high input, split calving operation milking 1000 cows was like chalk and cheese compared to his parent’s 150-cow all grass system.

“We stayed there for two and a half years, I did five calvings and five matings during that time. It was a great learning experience. It was good to see the other side of a grass-only system. We sit in the middle now with a System 3.”

Brendan and Tessa were looking at the next option to go sharemilking when they got the opportunity to buy into a farm as equity partners.

They had bought a rental house in Matamata seven years prior and sold that to raise the equity.

The partnership owns the land, machinery, cows and Fonterra shares and has a five year contract.

“After that we have a few options, which includes buying more shares into the company or maybe going somewhere else 50/50 sharemilking,” Tessa says.

The business has come a long way in the last three seasons, improving infrastructure, and the farm has a lot of potential, Brendan says.

“When we started we didn’t have a map of any water lines, we had to start from scratch. We feel we’ve got the farm to a point where we can capitalise on the improvements.”

The herd was amalgamated from three different herds so they’ve also worked hard to reduce the calving spread.

They have decreased the initial calving spread from 14 weeks to 9.5 weeks, and their empty rate this season is 7%, with an 80% six-week in-calf rate.

One of their biggest focuses was to get the animal health to an even standard and ensuring their mineral levels are all where they should be.

Last season they decided to put the entire herd to Artificial Insemination (AI) in a move to reduce their exposure to Mycoplasma bovis.

“We did the figures and we thought it would save us money, but in hindsight that wasn’t the case.”

Silent heats and non-cycling cows were harder to get in calf, Brendan says.

“We realised an all AI system on non-cycling cows is not always the best option.

“We also bought in late calving heifers and our empty rate was 17% last year.”

Having high empty rates in a new business is costly and they set about making a new plan for this season.

They decided to spend less money on CIDRs and bought in bulls to go with the non-cycling cows.

“We used less intervention this year, about 4% of the herd got CIDRs. We went the more natural way and let the bulls do the work. We used pre-mating heats to identify non-cycling cows and they went with the bulls straight away. Once they were cycling they went back into the AB herd.”

They used Hereford bulls for easy identification for any cows who got in calf by bull.

They used AB for five weeks, followed by four weeks of bulls and then tailed off with two weeks of AB to short gestation Kiwicross, pulling their calving spread back to 9.5 weeks.

“This year we also had our own replacement heifers coming into the herd, so we had a lot more control over when to mate them and made sure there was ample bull power.”

Getting cows in calf early is about being proactive, not reactive, Brendan says.

“Next year we should be almost finished calving by September. Which has a flow on effect for the rest of the next season.”

They DNA gene mark all their herd and keep good records and won the LIC Recording & Productivity Award.

Because of the progress they have made in the business over the last three years, the couple thought it was a good time to enter the Dairy Industry Awards for the first time.

“We wanted an opportunity to receive valuable feedback about our business and wanted to meet like-minded people on similar journeys,” Brendan says.

Being able to benchmark themselves against others in the region was an excellent opportunity to see how their business actually stacked up.

Through the process they were able to see the improvements they’ve made onfarm and what other potential was in their business, Tessa says.

“When you do the calculations and look at the figures you see how far you’ve come. From a business point of view it’s realistically shown us what we can do after these five years, as well as what we can do over the next two years.”

Winning the Auckland/Hauraki competition also gives them an advantage when employing other staff or looking for future employment or partnership opportunities in the future.

“We aim to be the employer of choice in the Hauraki,” Tessa says.

“This competition helps you get a good name out there, that’s why this competition is great for young people. It’s something we would certainly look for if we were employing anyone else.”

They employ one full time staff member who has been with them for three season, and use relief staff. They have installed automatic cup removers this year to make their time onfarm more efficient.

Tessa is normally calf rearer. The couple have one son, Toby, 22 months, and are expecting another baby boy in July so they will hire someone to rear the calves this season.

“We love working outside and with animals and being able to involve our son Toby,” says Tessa.

The couple are always looking to improve themselves and their business, Brendan says.

“The big challenge of the beast of farming is there are so many variables. You have to keep pushing and doing stuff like this to keep being motivated and to improve.

“It’s easy to float through two years and to be in the same position. We work well as a team and enjoy pushing for better results every year. We have the ambition to strive for improvements and to give ourselves options for our future.”

Runners-up in the 2020 Auckland/Hauraki Share Farmer of the Year category are Stephen Martin and Justine Fox.