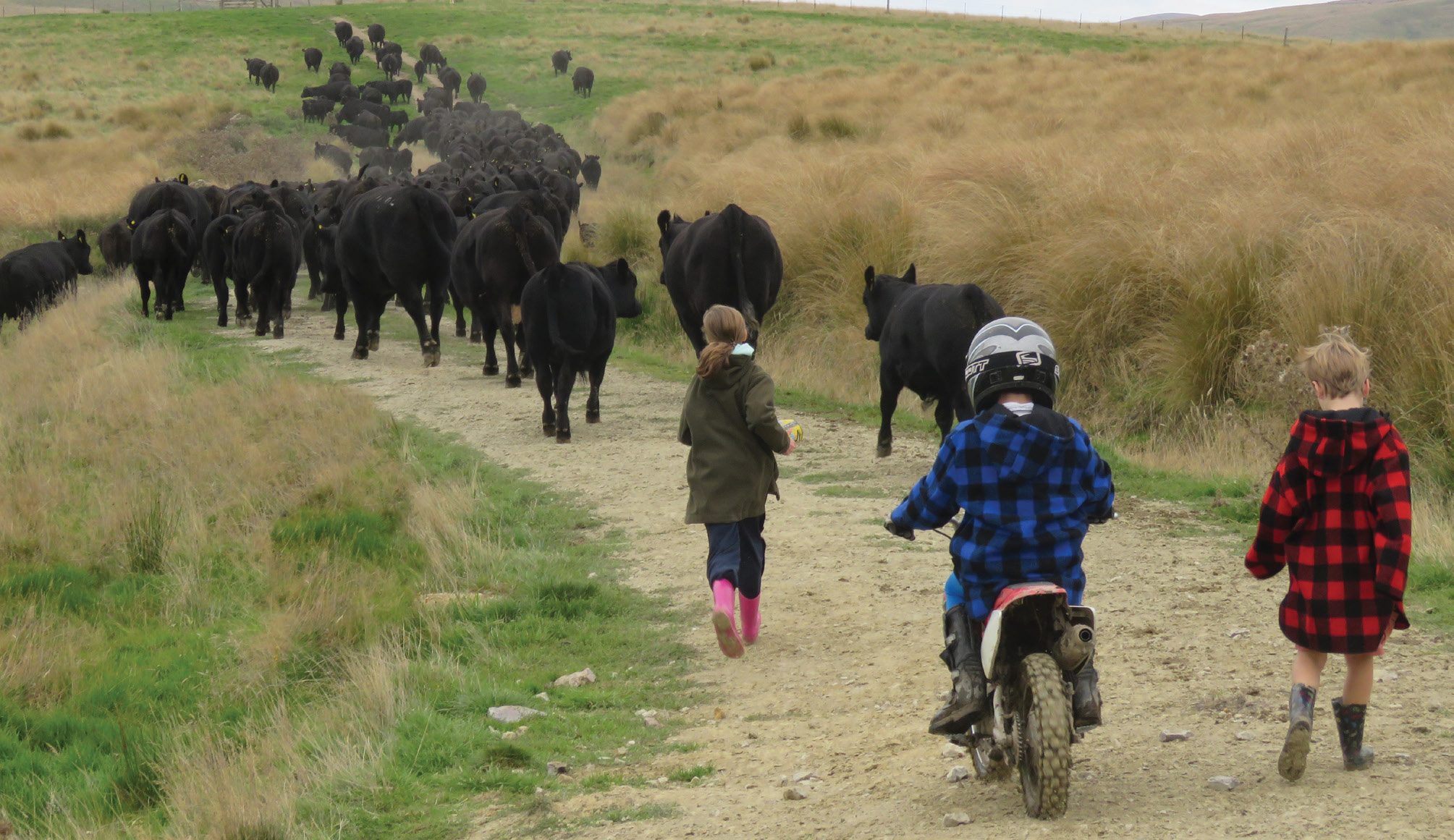 Investing resources and time in a joint farming venture only works for North Otago’s Blair and Jane Smith if they have skin in the game. Terry Brosnahan reports.

Gaining ownership is why the Smiths took a 50% shareholding in Neil and Rose Sanderson’s local Angus stud Fossil Creek.

“If we are going to be involved in something, we need to give it our all and have ownership”, Jane said.

They had previous experience with such ventures, including a 50:50 sheep stud in Victoria, Australia. It is a good blueprint for non-farming succession if banks support young people getting on the land. Jane said the most essential part of its success is having transparency and clarity right from the start. Non-family succession has to be more business-like, black and white.

She said it doesn’t mean there are no grey areas and emotion involved.

“You go in with your eyes wide open, with full commitment from both parties and an opportunity that utilises the strengths of everyone involved”.

Neil and Rose approached the Smiths near the end of 2014 after Blair and Jane had been farming for seven years. The Sandersons were impressed with the good job they were doing with their Perendale stud, Newhaven.

Neil had developed multiple sclerosis. Forming a joint venture meant he could give up the physical work and focus on the genetic side. More importantly the venture would allow the stud to grow and be moved to a higher-altitude tussock block.

The Smiths proposed a year’s trial to see if it was a good fit and they could work together. In 2015 they sold all their commercial cows to focus on the stud, and for biosecurity reasons, have no other cattle on the farm.

The initial venture was a risk and if it didn’t work the Smiths would have to buy another commercial herd.

“It was a risk but a calculated one, but we all had a gut feeling it would work.”

For the Sandersons it was a chance to see if the Smiths were up to the challenge.

The physical side of wading through tussock and tagging calves at altitude was demanding but something the Smiths were used to with the sheep stud. The Smiths are good at feeding stock well which isn’t easy in the North Otago environment. Jane said the best outcome after the year’s ‘dry run’ was confidence.

“It made us feel certain that it would work long term.”

A company was formed with all four directors using their own advisors some of which they shared such as the banker and lawyer. Meetings were held three or four times a year with everything documented and signed off by the advisers. The directors wrote their own memorandum of understanding. Any changes go into the memorandum and are signed off by the advisers. This made sure there was full accountability.

“Things that can go unsaid can often be missed in family succession.”

There were clear entry and exit policies with key dates for shareholder transactions.

Originally the Smiths were going to only buy a 20% holding and gradually increase it over five years, but the venture was working so well they went straight to 50:50. The Smiths recently increased it to 60:40. Jane said after the trial they were all more comfortable with each other and a 50% shareholding made it more clear cut.

They all do a bit of everything, so all have a good understanding of the business.

They all agree on the same outcome due to their shared goal of producing the best genetics for their clients and the industry. However, they may differ in the ways of getting there. Sometimes there can be four different ways to consider.

If they can’t agree then they can have a formal vote but so far that hasn’t happened. Communication, clarity and transparency are paramount. Every meeting is documented and minutes emailed almost immediately to everyone including the advisory team. Any wider discussion is included in the email. All four have job descriptions and policies have been written up.

“From the start we didn’t want too many cooks in the kitchen.”

No matter which director a client talks to, each can refer to the policies and answer questions. All know the business well. Getting the finance to buy their shareholding wasn’t easy for Blair and Jane.

One of Jane’s previous jobs had been working for Rabobank so she knew how the banking system worked. Stud stock are valued at commercial rates by the banks. So even though the stud stock cost more than double commercial cattle the Smiths could only borrow up to half of their equity.

They knew that would happen from when they bought into the sheep stud. They didn’t want to borrow against their farm, stud and assets. They wanted it to be an independent company and only offered stock as collateral.

The bank took the risk because Blair and Jane had a proven track record as did the Sandersons with Fossil Creek. A major strength was the independent advisory board which included their shared bank manager, both parties’ accountants and when required, their solicitor, Jane said. They were paid no more than their usual professional rate, but instead of eight separate meetings were all sitting in the same room. It was a major strength and comfort to the bank.

“You are only hearing from the horse’s mouth no Chinese whispers.”

“Banks have to take a risk on that, they have to.”

A lot of established farmers like she and Blair would be happy to pay an extra margin on interest rates to a bank that supported young farmers, even with their high debt loading. Jane is worried about the trend in the industry for large-scale farmers to land bank, and young farmers to be pushed out by foreign ownership, corporates or a monoculture of pine trees. “People with passion for livestock and land is what drives communities, not urban investors.”

Trust and respect the key

Jane does the books, finances, a lot of marketing. Rose does all the breeding records and performance recording data collection. Neil has 40 years’ experience in pedigree reproduction genetics and Blair is a “machine” at getting the physical work done.

They also all get on well and are on the same wavelength.

“It makes it easy when everyone is on the same page.”

When the venture was formed Fossil Creek had 200 cows, now it has 350.

Neil (64) was diagnosed with multiple sclerosis in 2015 and that year he and Rose decided to make a change. They agreed with the Smiths to a year’s trial in a share farming venture with the herd.

“We wanted to feel our way.”

“We just gelled and never had a problem.”

Neil said they approached the Smiths for many reasons. They were a young family, very well respected in the community, so they saw the potential for a long-term future for the herd.

“We always hope it will continue and be taken to the next level.”