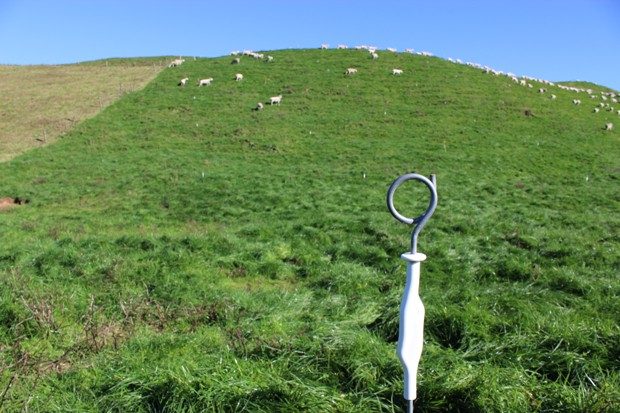 Trial work in Waikato and Bay of Plenty is putting the spotlight back on deferred grazing as a pasture management tool.

The three-year project, which began in July 2017, aims to build on research performed in New Zealand in the 1990s and in Australia over the last decade.

“From a practical point of view, deferred grazing is a useful tool to control pasture quality over the whole farm. If we take 10-15% of the farm out of grazing for up to three months we know we will take a hit in terms of production from these areas in the short term. But the payback could be a significant increase in ryegrass populations and drymatter production after deferring.”

The trial involves three farmers, Allen Coster and Rick Burke from the Bay of Plenty and Jon Sherlock from Northern Waikato, who are all members of Beef + Lamb NZ’s farmer council.

In 2017 a trial area was established on Allen Coster’s 215-hectare (effective) farm on the eastern slopes of the Kaimai Ranges to compare the effect of conventional rotational grazing with two deferred grazing treatments. One treatment was closed in mid-October and grazed again in December, with one grazing skipped. The other treatment was closed for three months from-mid-October and not grazed again until February.

There were four replicates of each of the three treatments (including the conventionally grazed treatment). The site was monitored from before it was deferred, with baseline measurements taken from October 2017.

Like the other farmers involved with the trial, Allen measures pasture growth on the trial area while AgResearch and Plant & Food Research staff monitor the impact of the treatments on the pasture’s botanical composition, pasture quality, and soil characteristics. Facial eczema spores are also monitored.

Tozer says Farmax modelling will provide an understanding of the economic impact of deferred grazing on livestock production and farm profitability. The results of this modelling will be released later this year or early in 2020.

But early findings from the trial work, which is funded by SSF, Beef + Lamb NZ, Ballance Agri-Nutrients and BoP Regional Council, show some positive outcomes.

‘The implications for nutrient and sediment run-off, moisture retention and water quality could be quite significant. Deferred grazing might be an effective environmental mitigation tool, but we need robust science to investigate this.’

For example, on Coster’s farm, measurements taken in October 2018 showed the late opening treatments had a tiller density of 4700 per square metre, compared with 2700 tillers/square metre on the conventionally grazed treatment.

Pasture quality declined during the deferred period but improved again after deferring. While deferred pastures could not be grazed in summer, pasture drymatter production on treated areas was higher from Autumn onwards.

In Spring 2018 the grazed treatment produced 3400kg DM/ha, with the deferred treatment growing 4260kg DM/ha. However, by Summer 2018/19 drymatter production was similar on both treatments.

“This year we will be doing field work to see if this pattern is repeated in the paddock,” Tozer says.

“If that’s the case, the implications for nutrient and sediment run-off, moisture retention and water quality could be quite significant. Deferred grazing might be an effective environmental mitigation tool, but we need robust science to investigate this.”

He grazed the treatment blocks with dairy heifers and they achieved similar weight gains as they would on the conventionally grazed pasture.

But he says breeding cows or cull dairy cows would be more appropriate classes of stock for grazing deferred areas because weight gain is less of a priority.

Tozer says farmers wanting to use deferred grazing as a tool should take a long-term approach.

“You’ve got to have enough feed in the system to be able to drop paddocks out, and you need the right class of stock to graze deferred pastures.”

Timing is crucial. To be effective, pastures should be locked up before they flower and set seed and not opened for grazing until after seed has dropped.

“That will enable you to capture the benefits of new plants produced by the ryegrass seedbank, while allowing the existing plants to grow more tillers. The danger of shutting up for too short a period is that you will lose some of the benefits for the herbage and the soil. It’s important to consider what is happening below ground as well as above it.”

And locking up a paddock full of weeds in the hope of suppressing weed growth is pointless.

“If you lock weeds up, you’ll only end up with more weeds.”

Tozer says the value of deferred grazing will vary from farm to farm and season to season.

In situations where summer rainfall is adequate, such as on Coster’s farm, deferred grazing will help ryegrass grow more vigorously and produce more tillers.

“In a really dry year the extra feed produced by deferred grazing could be critical and the seedbank will be an important source of new ryegrass plants. In a wetter year, the growth of existing plants will boost the ryegrass tiller (stem) population.”

The trial has been replicated on the Sherlocks’ farm near Ngaruawahia to measure the effects of deferred grazing in drier areas.

Tozer says Farmax modelling will “put everything into context in terms of the overall profitability of deferred grazing”.