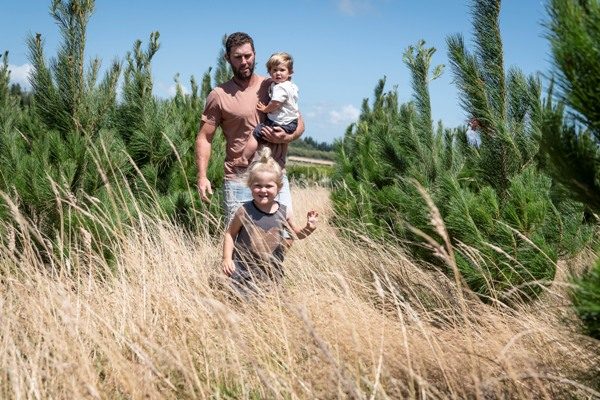 A Manawatu couple are learning as they go and more than happy to experiment with new ideas. Jackie Harrigan reports.

Mike and Ryley Short haven’t let the odd failure put them off trying new things. In fact they say failing is part of the learning in building their Sanson dairy farming enterprise.

They are the kind of couple that have one new idea every day and love to discuss and debate them and then give things a go.

With Mike’s degree in soil science and commerce and sheep farming upbringing, combined with Ryley’s event management background and Waikato dairy farming roots, the couple have both the skill set and the drive to try things.

Building a dairy conversion on the family sheep and beef farm through four years of dairy downturn on marginal Manawatu soils has been an exercise in cost minimisation, and Mike and Ryley have had to be creative in supporting their family and building their business.

‘It was a shame the payout halved between signing up and supplying – but it’s made us better business people – everything is questioned and done by ourselves if possible – we just had to keep costs down!’

After leasing the family farm from his parents Ian and Wendy, Mike and Ryley set about growing the platform by adding extra pieces of neighbouring land until they had 110 hectares. They felt small-scale sheep and beef farming would not support a growing family and Mike had reared thousands of calves with the use of 80 old milking cows through a 10-aside shed so they kicked around the idea of having a proper dairy farm, encouraged by Ryley and her Gordonton dairy farming clan.

With the green light from Fonterra Mike installed a second-hand 20 a-side herringbone TradeMe shed out of Taranaki with the help of family and handy friends and used similar practical mates and hired machinery to dig his own effluent ponds.

It was a big day when the tanker was called for pickup from the 130 foundation cows, Mike says.

“It was a shame the payout halved between signing up and supplying – but it’s made us better business people – everything is questioned and done by ourselves if possible – we just had to keep costs down!

“Three other conversions launched at the same time as ours in the district have already changed hands,” he says.

Armed with a consent to milk 250 cows on the Halcombe silt-loam soils (which overlay an impervious layer of clay loam), the couple set about building herd numbers year-by-year by retaining all their heifer calves and leasing heifers and concurrently developed races, fencing and water systems as they expanded. Regrassing the farm was aggressive at the start, with up to 20ha of the paddocks put through a crop and sown into permanent pastures on the rolling hills when the platform was just 70ha.

In the relatively low rainfall of about 980mm/year, with no irrigation, Mike says emphasis is very much on establishing a low-input system on the marginal dairy farm.

“We wanted to start with very simple systems and keep away from outside pressures, we won’t be revolutionising the dairy industry but we want it to be sustainable and profitable.”

“The way the herd has been growing we haven’t had a status quo season yet – we have been putting a lot of milk into extra calves and milk production has wavered.”

Mike says the cows now produce about 330kg milksolids (MS)/head and another 30 cows have been added into the herd each year as blocks have been regrassed and brought into the dairy platform.

“Breaking in each block has been a two-year process – shutting up the sheep tucker and wintering on it, then putting it into turnips for the summer and regrassing it for the following spring.”

Over the last five years, having regrassing areas out has constrained carrying capacity, so the couple have done lots of cow trading, depending on grass supply.

“It’s all been about using the grass we had to make milk and make money to put back into the farm.”

“Every year we do another kilometre of race, put in another eight-10 water troughs and then fence it up – another two years of doing that and we will have a properly fenced dairy farm.”

Last season they had their first full-time employee through to Christmas as Ryley is busy with Laney, 4, Hudson, 2, and another baby due in April, and another relief milker has been taken on for the weekends for the rest of the season.

Side hustle for more than money

With a very constrained budget (keeping farm drawings to $12,000/year has been the goal over the past three years) Ryley has taken on contract work as event manager for The Brave Thinkers event and the couple have developed many innovative side hustles.

The Brave Thinkers event is for year 12 and 13 students interested in the business sector and has run in the July school holidays showcasing national businesses while giving the 60 students a real problem to work on and mentors to help.

Other side hustles have been the icing on the cake – and have come from thinking outside the square and wanting to make extra income but also share the riches they have on their farm.

“We are so lucky living here and it’s great to share that with others, as well as bring a crowd to us – we are social creatures and farming is a fairly solitary pursuit – we love to have a crowd around and share the banter and the good times,” Mike says.

A block of 300 three-year-old Christmas trees have been grown by Mike and Ryley to form a holiday fund for them and the children. An experimental block, the couple have already been approached about selling the entire stock over a two-year period to a Wellington trader.

“We need to learn about shaping them to get the best Christmas tree shape so they are looking great by December – it’s all new to us but we’ll give it a go,” Mike says.

Whether or not they replant the block, it’s been a good exercise to fund a holiday.

Living in a small house they moved on to the farm with two children, Ryley and Mike thought a caravan would be handy to host family and friends, so they bought a $1000 shell as a project and as a potential spare room.

Ryley was working at Black Sheep Design at the time and so came up with a design and brand for the caravan. With help from their talented engineer handyman friend they took the top off the wreck and rebuilt it with new windows and a big bed and cabinets and ‘A Short Stay’ was born – with a Facebook page and Instagram feed to promote it.

With a comfy queen-sized bed and built in cabinets, the couple have been amazed at the number of people keen to come and stay in the caravan at their farm. Honeymooning Kiwis and Germans, Dutch yogis (that’s a yoga instructor and friend), French and German HelpX workers helping in the house and milking shed for free caravan board and food, fashion and film students from Wellington through Air BnB (with their accompanying Rag doll cat) and Te Araroa walkers have all had ‘a short stay’ with the Shorts in their cosy caravan on the farm.

The caravan has also been hired and taken to the road to Taranaki, Wellington and the Coromandel – and been on more holidays than the Shorts have, Ryley says with a rueful chuckle.

Mike’s passion for motorcross and willingness to share his patch of dirt has in the past led to turning his current cropping paddock into an impromptu motocross course for his mates prior to resowing, and the success of the rides led to him setting up a more permanent course in the back paddock of his rolling farm.

“Riding is my stress relief and I could see how others enjoy having somewhere to ride too, so when I had a digger on the farm I put in a few permanent jumps and hosted a funday and 100 people turned up.

The course has been vetted and signed off by Worksafe and riders sign a waiver at the gate and make a suggested donation of $15/bike into the honesty box for days riding.

“We keep it really safe, there is no stock, no wires and no workers around.

“But everyone has to take personal responsibility for their own safety and to sign the waiver to that effect.”

Mike signals the availability of the track through the Mahua MX Facebook page and posts photos and comments about the state of the track and embellishments and grooming he has done to the 700-plus followers.

“We only open when we are here and when the weather is good – on a summer evening or weekend – we can get 10-15 riders most weekends and up to 40 on a long weekend.

“It’s an awesome track to ride and very well-received by the riders – everyone has been very respectful of the property.

“The crowd comes out to us and we have lots of fun with our mates, they might come out on a Friday and have a ride and few beers afterwards – it’s great to bring the party to us.

“We love to keep our brains active and think – why can’t we do it? We have put another old caravan on the hill and the five-year plan is to build a deck and fit the van out as a bit of a party venue so we can host stag dos and duck shooting parties.”

MotoX, 4WD-driving, golf, water slides and claybird shooting could all be on the menu of fun activities on offer.

Mike is training for the MotoX event at the Masters Games in Wanganui in February so has marked out and hosted 10km loop rides around the farm through trees and across the rolling land – that’s what the people love to come to ride across, he says.

Leasing a neighbouring 110ha block last year has allowed Mike and Ryley to expand their support block and build a Speckle Park herd.

“I love Speckle Park cattle – I have been buying bulls from Maungahina Stud in Wairarapa and they are not cheap but you get a much higher priced calf out of them.”

By using the bulls over first calving heifers and rearing the half cross heifer progeny they topped the Feilding weaner fair last year with 170kg heifers selling for $740/head and have also sold ½ SP heifers in calf to a purebred Speckle Park bull.

Breeding up the numbers in their dairy herd the Shorts have never had bobby calves in the past – they prefer to breed as many replacements as they can and use the Speckle Parks over the heifers.

“I think bobby calves are a massive waste to the whole dairy system,” Mike says.

Ryley laughs that their way of doing things is very different to her traditional dairy farming family but they have had to do other things to be able to buy land in the Manawatu.

“My family are always shaking their heads and saying ‘what are you doing now?’.

“We have used the other piece of land to get an extra income off – we reared our heifers through to being second calvers and then put them into the herd.”

Mike and Ryley have approached the road to herd and farm ownership differently and say they have another five years to go before the job is done, but they are making it interesting, fun and helping ease financial pressures by embracing some interesting side-hustles on the way.