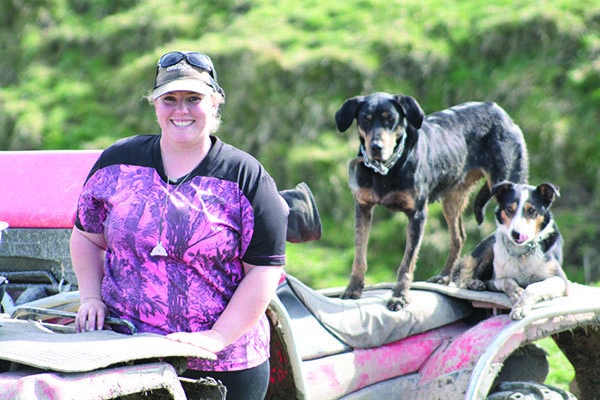 A lack of practical experience made it hard for Ashley Greer to get a foot on the career ladder in the sheep and beef industry, but she refused to take no for an answer. After years of trying, she has landed her dream job shepherding on a progressive sheep and beef farm near Masterton. Rebecca Harper went to visit her.

If at first you don’t succeed, try, try, try again. It’s an old proverb, but one that is particularly relevant for 28-year-old Ashley Greer.

Ashley set her heart on a career in the sheep and beef sector and began studying towards her Bachelor of Science, majoring in agricultural science and minoring in animal science, at Massey University. In her holidays, she needed to obtain placements onfarm.

The problem was, most farmers wanted prior practical experience. But how to gain that experience if no one would give her a shot?

“One year I applied for about 20 jobs, only heard back from three and got an interview for one. I wondered why I wasn’t getting anywhere and it was my lack of experience.”

She discovered the dairy industry was more open to employing a female who was just starting out, and decided working in dairy would at least give her some practical farming experience to build on.

Flipping things around, she switched to working full-time as a relief milker and studying part-time. She has almost completed her degree.

“I think a lot of it is to do with networking. It’s often about who you know in farming, in my experience, and I had none of those contacts.

“The plan was, if I still didn’t have a sheep and beef job by the end of my degree, I would go to Taratahi or do a PrimaryITO course to gain more practical experience.”

From relief milking she moved to a sire proving farm, running a small herd of heifers, before taking a dairying job in Ashburton.

About a year ago, Ashley and her partner, Thomas Higgins, moved to the Wairarapa to live on his parents’ farm, where they operate their Oregon Angus cattle stud. This allowed her to help out at key times, like docking.

Still no luck getting a job on a sheep and beef farm, though, so she took a job calf rearing. “That job was a very intense operation. I ended up calf rearing and milking, then on the vet stand to pick out the ones for mating.”

Although dairying wasn’t her cup of tea, she saw every job as an opportunity to learn.

“I always tried to take something away from every job, but in the back of my mind it was always sheep and beef. I grew up on a sheep, beef and cropping farm at Bulls and loved it. I don’t like milking, I find it boring, it’s not my idea of farming – I’d rather be out shifting breaks than stuck in the shed.”

Not deterred, she continued applying for shepherding jobs and couldn’t believe it when she was offered two within a week, opting to take the position as a shepherd with Andrew Freeman at Ngahere, east of Masterton. She started her job in mid-June.

“Thomas said to me, before I got this job, I’ve never known someone to keep going after being turned down so many times. But I still wanted to be a farmer and I 100% didn’t want to be in dairying. I like the lifestyle and the variety of sheep and beef, both of us grew up on sheep and beef farms and we want that for our kids,” she says.

“I was stoked to be offered a different job three days earlier, when I got the phone call I actually cried – someone was finally taking a chance on me. It definitely made the hard work pay off. When it rains it pours, I’d had nothing and then two job offers in one week.”

Long term, Ashley’s dream would be to get into stud work and one day, have her own stud. “Probably Charolais. I think they’re beautiful and have a lot of great attributes – although my boyfriend’s father would say Angus… Genetics is pretty exciting.”

Ngahere is a progressive and innovative farm, with plenty of exposure to new things and opportunities to upskill for Ashley.

The farm has excellent infrastructure, with laneways and well-subdivided paddocks.

A large portion of the farm, 250ha, is in herbs and clover or brassicas.

Andrew describes the farm as an opportunistic, flexible system focused on trading ewes rather than capital stock. The well-publicised triplet transfer programme he has run in the past is not happening this year though, with no ewes on the farm, only trading stock. Instead, they have on trade lambs and about 500 in-lamb hoggets, with hogget grazers coming on soon.

Ngahere was a family farm and has been restructured into a corporate entity. There are three investors, including Andrew, and the farm was sold to the new company.

The family was bought out, with Andrew retaining his share.

“At that time we recapitalised it very positively, so it’s a farm with an appetite for risk and innovation. We are prepared to play at the edges of the square, and outside, if we see opportunities.”

The farm carries a low stocking rate over winter, cranking up to 14-16 SU/ha
in spring to aggressively match the feed curve.

“Really the whole system runs around growing as much as we can in spring and harvesting the whole lot. The rest of the year is strategic trading.”

Farmax is an important tool and they undertake a lot of feed budgeting and modelling. All trades are based on efficiency of cents/kg drymatter.

It’s all about making sure the animals are happy and the farm operates at an individual animal level – if there is anything wrong with a single animal, action is taken.

“We are only as strong as our weakest animal, we try not to have underperforming stock,” Andrew explains.

A different approach to staffing

Andrew is known for his innovative farming practices, so it’s probably no surprise his approach to employing staff is somewhat different to the norm.

“Ashley is our second female shepherd. We took a punt on what we had been told by other farmers – good attention to detail, better with stock, things like that.”

Andrew is more focused on attributes like loyalty, honesty and good work ethic than he is hung up on practical skills, which he believes can be taught.

He saw Ashley’s dairying background as a positive. “We try to run the farm towards a semi-dairy model – growing large amounts of feed and trying to harvest it all,” he explains.

“Many farms have experienced the young male shepherd who is great some days, but hungover or injured from rugby others. We wanted someone who valued the job opportunity, would treat it as a professional role and be rewarded accordingly.”

Recent major back surgery has put Andrew out of action and meant he is more reliant on his two young shepherds, Ashley and Junior Taulago, who has been with him for two years.

This, along with a move towards more off-farm work as a mediator over the last two years, means Andrew has had a rethink about staffing.

“I’m shifting the day-to-day farm work towards young, fit staff and I’m honing more on the analytical decision-making side of the business.

“Staff on a dynamic farm like this need to be motivated, self-starters and able to run their own day a bit.

“As a boss you have to be realistic too. Ash’s dog skills were not strong, so we have challenged Ash and Junior to spend a few afternoons a week on dog work. We see that as an investment… you can’t just expect people to get better without giving them space to practice the skill. The aim here is for experienced staff to share their knowledge and help grow new staff.”

Despite a lack in some practical skills, it was her attitude and work ethic that shone through in the interview and convinced Andrew she would be a good fit for the team. She also showed enthusiasm for things like EID tagging, weighing and break feeding.

“Junior was part of the employment process and identified Ashley as someone he could work and grow a good relationship with. Her high level of intelligence and the fact she was local were huge pluses. She had also shown the initiative of approaching us two times in the previous 12 months.”