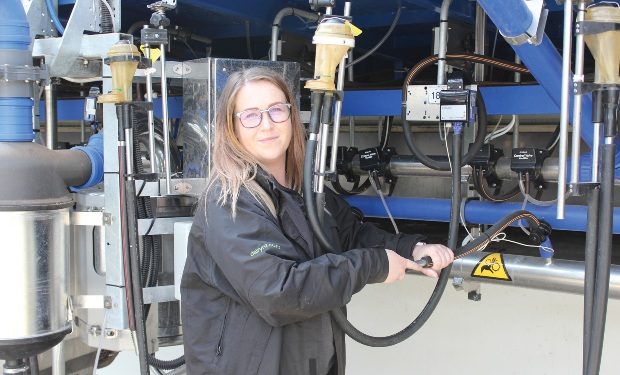 Accuracy is all important for DairyNZ research technician Holly Jamieson.

Based at the Southern Dairy Hub near Invercargill, the 26-year-old gathers and records the data for the many trials taking place on the 750-cow research farm.

From measuring pasture and working out drymatter percentages to weighing calves and taking blood samples, Holly is collecting and inputting the information which will lead to the conclusions on scientific papers which will be read throughout the world and influence the way dairy farmers in southern New Zealand run their businesses.

“Everything I do, the end goal of all of it, is to help farmers with their decision-making,” Holly said.

“All of the information I’m collecting becomes the basis of reports for farmers – it’s exciting to be doing it, to be at the forefront of it all, but also a bit nerve-wracking.”

Waikato-born, Holly has milked cows from a young age and gained level three and four certificates in sheep and beef at Taratahi where she met her partner Hamish.

After a couple of years milking the pair decided to move south and now live in Otautau where they are enjoying the hunting and tramping the area has to offer. Hamish works for a fencing contractor and for two years Holly worked as a vet tech and raised calves.

She then saw the ad for a research technician at the hub, had already done some relief work there and liked it, so she applied.

“It’s one of the few jobs where there is no specific qualification, but relevant tertiary qualifications and experience count for a lot. Then, on the job, they train you in everything else you need to know.”

She is one of two DairyNZ research technicians at the hub, both of them under the South Island technical team leader Anna Clement who is based at Lincoln. Holly also works closely with senior scientist Dawn Dalley.

Since starting in October she has learnt many of the skills required for the job and is continuing to train with a week-long DairyNZ pasture course lined up in the Waikato.

A typical week for Holly is a herd test Monday afternoon and then Tuesday morning, plating the farm on Wednesday, body condition scoring the herd on a Thursday plus a farm meeting and on Friday catching up on entering data.

“It’s always interesting. I haven’t been bored yet. I try to do the inside jobs like entering data when it’s wet but sometimes you have to be outside whatever the weather.

“There are only the two research technicians working here for DairyNZ but there is always someone to talk to. Our office at the hub and all of the lab rooms are in the same building as the rotary dairy so there is usually milking going on and farm staff around.”

All of the information gathered is written up in weekly reports and made available on the hub’s website. The reports are also used for the weekly meetings for the farm and science management team, which Holly also attends.

“It’s pretty cool. You can see the growth rates and what the cows are doing and you can compare it with the figures from last year. It’s all happening right in front of you.”

Measuring the grass is done by hand with a rising plate meter instead of a tow-behind on a quad bike or other electronic methods.

“Doing it by hand works for us because we gather a lot of other observations about quality or species as we go. We record what we visually observe the grass to be at as well to make sure the plate meter is giving us realistic results.”

Grass samples are also cut, dried and weighed to find the drymatter to back up the plate meter figures.

Plating the farm takes three people all morning on a Wednesday and it’s done whatever the weather.

“Most of the times so far when I’ve been doing it, it’s been raining. We’ve had a really wet spring and early summer here.”

As well as measuring the grass weekly, monthly measurements and grass samples are also done pre and post-grazing to see how much the cows are eating and the quality of the grass.

When the cows are wintering on kale and fodder beet, grass measurements are replaced by crop measurements.

But besides the grass, there is also stock work.

Examining the growth rates of the farm’s calves is part of a three-year trial looking at the effects of fodder beet and kale on individual animals.

Not only is their weight recorded every fortnight but also their length, girth and height.

“They’re handled a lot these calves so they are pretty used to it. They’re very quiet and don’t seem to mind. We measure their height using a calibrated stick but their length and girth is with a tape measure.”

To assess the effect of crop on the mature cows, bloods (from the tail vein), milk samples, urine and faeces are also collected to see if there is difference between the farm systems.

Holly does a regular 40-hour week, with weekends off unless the trial work requires testing to be done daily.

“In the spring we’re taking the bloods and measurements of new-born calves so we were working rostered weekends for that.”

The farm is divided into four farmlets with the four herds all going to their own paddocks.

“It took a bit to get my head around it when I first came here but it’s more of a juggling act for the farm staff than for me.”

A whiteboard in the hub shows where each of the four herds are each day and the paddock they’re going to after milking.

“With the data, I can pull up any cow number and know what herd it’s in and see all of the information that has been recorded about her from our tests and also from mating and milking.

“It’s really interesting when you start pulling the information together and seeing trends happening.”

She said accuracy was important.

“It’s not good enough to say I think it’s that cow. You have to check the tag number and know you have recorded the right information with the right cow number.

“If the research isn’t accurate then the reports won’t be accurate and it’s all been a waste of time and money.”

It’s at the weekly meetings when her hands-on knowledge becomes useful.

“We just don’t sit there and give the results of what we’ve recorded for the current trial. We’re able to be involved in looking forward and suggesting ideas that could become trials in the future.

“It’s really the best of both worlds. I get to be outside and working with animals on a farm but I’m also involved in the science behind the decision-making.”