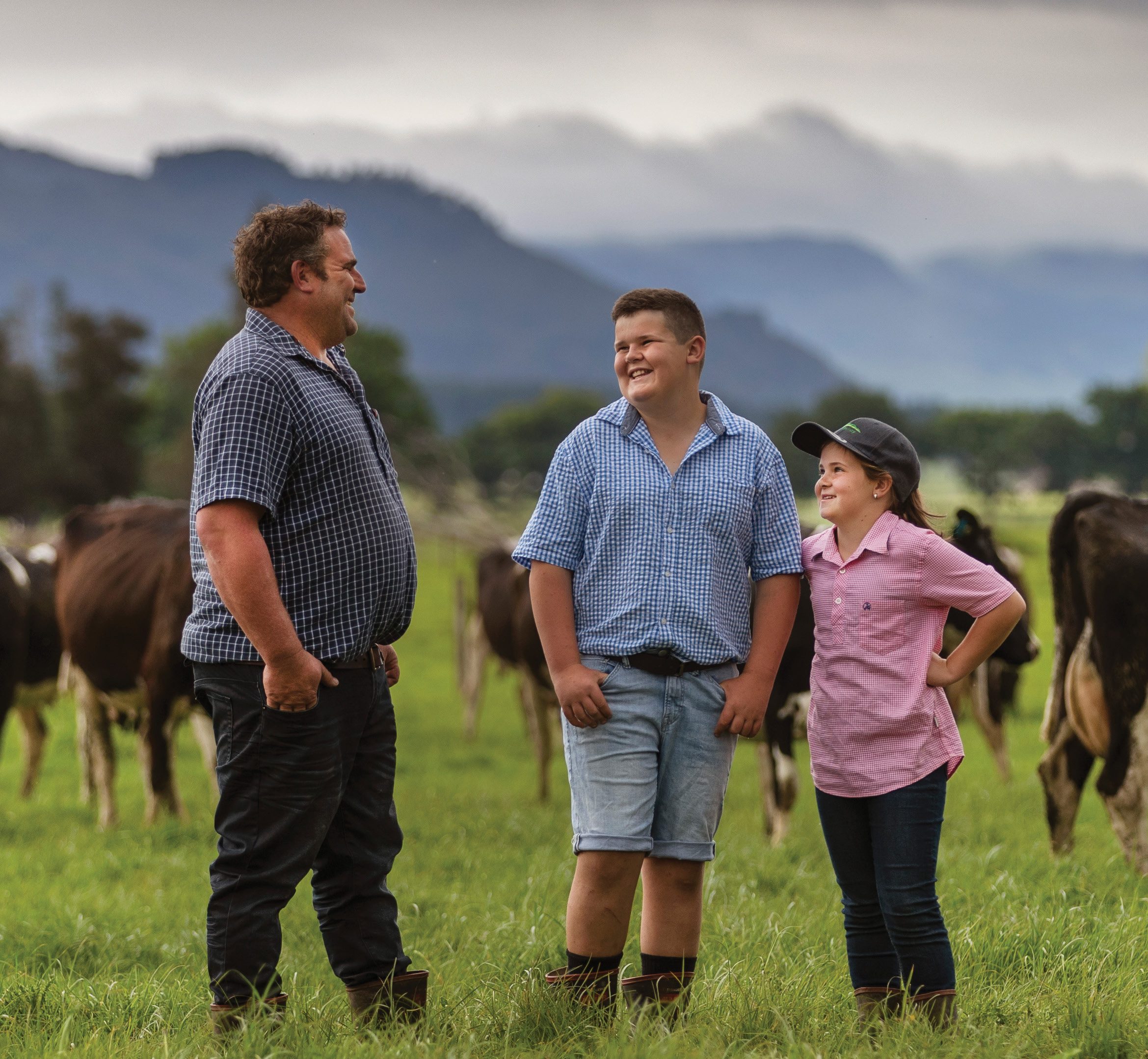 Dairy farmers don’t want to give their kids a hospital pass in the future, with a farming business that is not set up to survive under environmental regulations.

The number one vision for Mike Van Marrewijk is to have a sustainable farm for the next generation. Whether his children decide to go farming or not, he wants to ensure he’s passing on a viable farm that is operating profitably.

“You don’t want to pass on a shambles.” 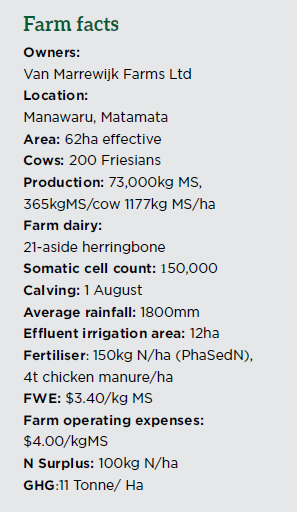 “No question was a dumb question,” Mike says.

The farmers filled in their own FEPs which included farm facts and goals, with plenty of onhand support from Open Country.

Mike has found the process empowering, growing his knowledge of the coming regulations and what the best options are to be ahead of them.

“I went in green but open minded about it. There is no point banging your head against a wall, you want to do these things for the benefit of your operation.”

All of the environmental regulation coming at farmers can be daunting, but Mike says he is more comfortable now with what he is doing onfarm and what else he needs to do.

“A lot of farmers can have a negative attitude or a tick-the-box attitude. But if farmers are honest with themselves, they’re looking after the environment on a day-to-day basis anyway. This makes them realise what they’re doing and gives them credit for it.”

Mike says it’s better for Open Country farmers to have this tool and fill in the FEP themselves, rather than the dairy company doing it for them, because farmers will grow their own knowledge and be better prepared for future changes.

“If farmers do the plan themselves, in the long run they’re going to be more sustainable.

“You’re understanding it and you’re in front of it. You’re aware of the regulations and what you have to do to abide by them.”

Mike’s wife Sarah, a former vet technician, is off a dairy farm at Te Kauwhata and still helps her parents who are milking 850 cows. She was involved in the process of doing their FEP alongside their dairy company, and says after the Open Country FEP she now has a much greater understanding of the regulations and guidelines surrounding farming for the environment.

She has seen Mike’s confidence and knowledge grow around the environmental regulations and setting future goals for the farm.

As part of the process, Mike had Open Country and council representatives visit for an onfarm assessment where he explained to them what he was planning on doing with potential risks onfarm.

In the past, he would have balked at anyone from council coming over the farm, but by the time they left he was stoked because the visit had confirmed he was on the right path, Sarah says.

“You are working alongside the regional council and Open Country, they are there to help.

“Feedback from council was that we were on the same page, on the same level. It gives you the confidence knowing you’re not doing anything wrong,” Mike says.

Their FEP will now go online and will remain a live document, so Mike and Sarah can go in and update it at any point.

Open Country is planning to make it easy for farmers to then share this data with other organisations. (Read more on page 62).

Mike has lived in the Manawaru area his whole life, growing up on the dairy farm two farms down the road from where he farms now.

In 1999, at 16, Mike and his brother Leo were offered an opportunity to buy the farm.

Mike had to make a big decision and put his mature hat on at 16, but he has no regrets.

Mike and Leo made the transition to Open Country Dairies in 2006 when the company was just starting out and it didn’t have many suppliers.

“We thought we could do more with our share money than Fonterra was at that point, and we invested it into a runoff.

“We had been farming for about five years and we had had some tough seasons, with droughts and even cutting down poplars to feed our cows. We thought that was best for our business, getting the runoff eliminated supplement and grazing costs.”

The decision has allowed them to continue to expand their family business.

Along with the home farm, where Leo is milking 300 cows, the family trust also owns another dairy farm in Matamata milking 300 cows, which Mike oversees, and two 100-hectare runoffs, Leo manages one, with their Dad, running the other.

Mike’s farm is a DairyNZ System 3, feeding grass silage and 2kg meal/cow through the farm dairy to deliver minerals.

The farm imports all its grass silage from the two runoffs where they make 3000 bales to be shared among the farms, this allowing them to milk a full season comfortably regardless of a drought being present or not.

His spring calving operation starts calving on August 1, which suits the climate and the farming system. They don’t use any artificial insemination, using only Friesian bulls for nine weeks.

They sell all bulls at four days old.

They use 150kg N/ha in the form of PhaSedN and Sustain, otherwise the bulk of their fertiliser is chicken manure combined with their effluent solids and post peel from the stand off pad.

Mike spreads it himself using their muck spreader in autumn. Mike is looking into scales or a GPS to be able to collaborate exact application rates and locations on the farm to input into the new FEP.

They irrigate effluent over 12ha from their new 1.2 million litre pond. Mike was in the process of building the new effluent pond with his father Leo when he completed the FEP with Open Country. They made a few adjustments to their design after learning more at the seminars and feel even more comfortable with the design of it after going through the process.

This winter has been a dream with the extra effluent storage, Mike says.

“Even when the effluent pump broke down, it takes the stress out of it.”

They extended the existing pond and lined it themselves with the kids pitching in to help.

“Matthew and Kaitlyn both helped build the new effluent pond, laying the pipes. They’ll remember that.”

The kids know what is right and wrong when it comes to the environment so it’s good for them to be part of those projects onfarm, Sarah says.

“Our kids go eeling all the time, so they can be comfortable doing a hobby they enjoy and knowing the water is fresh.”

One of the next projects for Mike is to pipe a 70-metre drain which is at potential risk to nitrate runoff.

“Some farmers will look at that as a cost, but I’d rather put money into that to do the right thing than spend that money in court or on a fine.”

When it comes to GHG and emissions costs, Mike envisions them being able to offset the milking platforms with native plantings they already have on the runoffs.

Having marginal and less productive land in trees makes sense to him because there is less erosion.

“Going forward I think we will be putting more pressure on quality land like our farm. In my opinion, there is land that should not be milking cows and that’s going to become more obvious when those farmers start doing their FEPs.”

Another bonus of completing the FEP and growing his knowledge has been sharing the information with his neighbours, Mike says.

The Wairakau District community has a great social network with farmers meeting up regularly for a beer, helping each other out on farm and a group of them even plan trips away together.

Having that social scene is important with the pressures farmers are under, from bad weather events to the stress of future environmental challenges.

“I’m not a farmer who just stays within the four fences. It’s good to have that interaction and know everyone is in the same boat.”