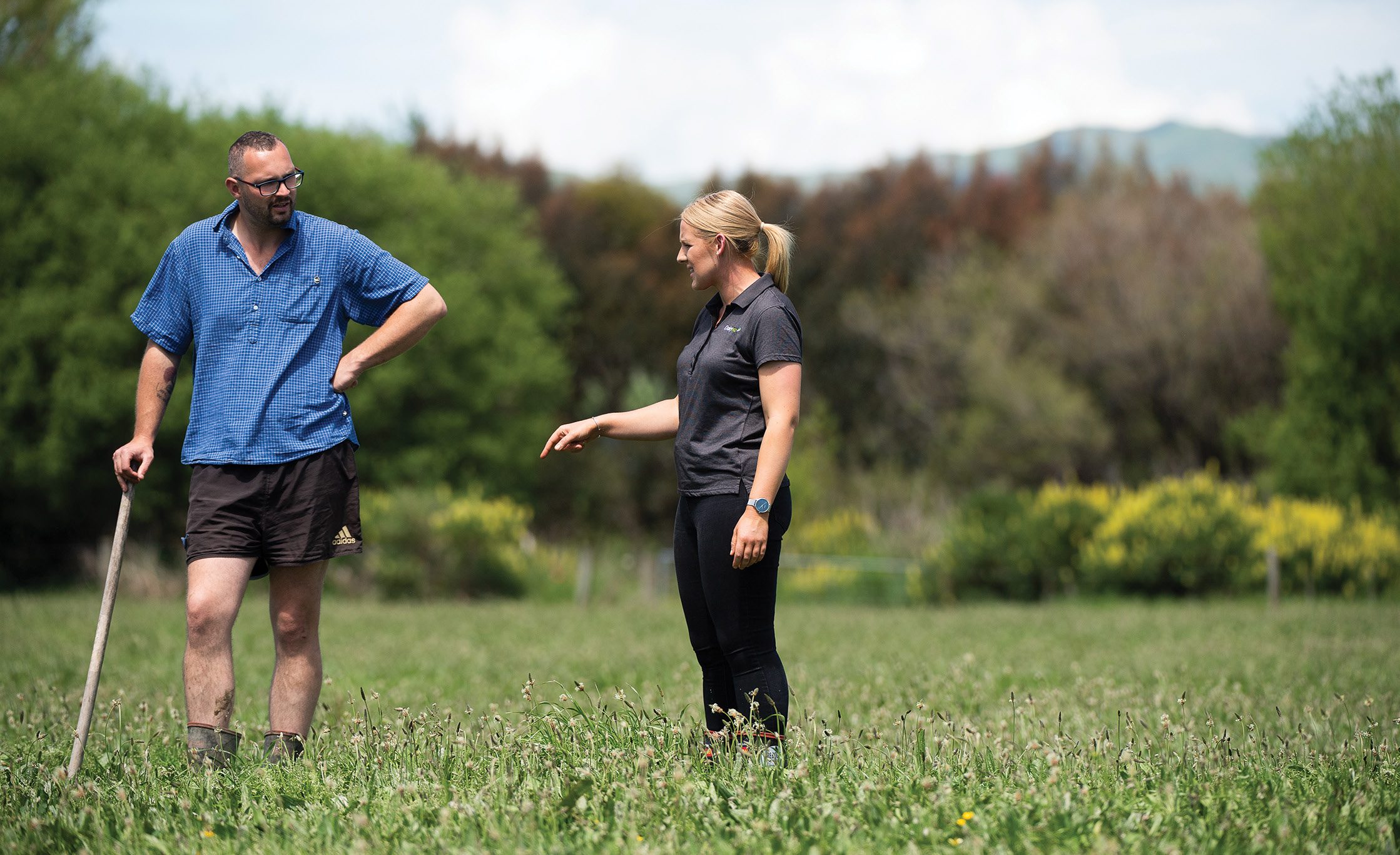 A young couple hailing from opposite sides of the world are focused on a future in dairying. By Jackie Harrigan.

Francesca Bennett and Riley Collinge both grew up in urban settings, but they see their futures firmly on the farm. A future that involves owning their own dairy farm with high-performing cows and feeding them plantain.

Fran arrived in New Zealand fresh from Warwickshire, England, at just 17 years old, keen to work and learn more about dairy farming from a family friend contact in Southland.

Riley grew up in Porirua and a three-week billet on a farm in the King Country immersed in dairy farming when he was a young boy sealed the deal for him. The Gateway programme through Wellington College on Kerry Walker’s Te Horo farm fostered his dream until a teacher suggested a Taster week at Telford, and sent him off with overalls and gumboots for a couple of weeks of Southern dairy life.

Two years later with a Telford Certificate in Ag and Diploma of Ag under his belt he was offered a job on the farm he did his diploma case study on, so he stayed in Southland and got busy dairy farming.

Not so busy that he didn’t have time to meet a young English girl who had fallen in love with dairy farming. Faced with a choice between using her return ticket to go back to England to return to ag college and staying in NZ to pursue a new life, she took the advice of a helpful Southern-man truck driver she was delivering dry stock with, who urged her to just “Go for it – what have you got to lose?”

Fast forward five years and the now 28-year-old Collinge and 25-year-old Bennett have five years of Southland farm assistant and farm management roles under their belts (including a manager’s role on a 400-cow first year conversion at the age of 19) and have relocated to the Tararua region to be closer to Riley’s Wellington family. Add another three years (including one season contract milking) and the couple are variable order sharemilkers for Mark and Tanya Diamond on their 121-hectare Oringi farm. 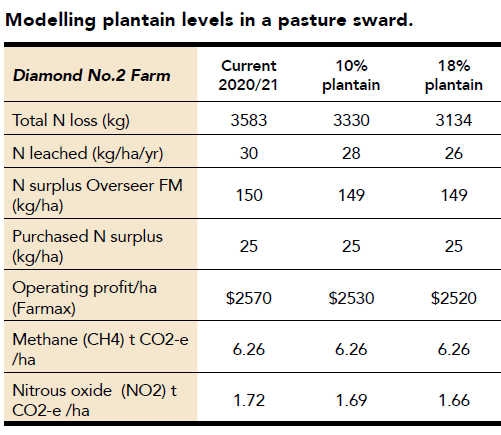 The 110ha effective property has now been sold for a drystock block, but the long three-year settlement gives Riley and Fran time to enact the first part of their cunning plan.

They have already invested in a rental property in Levin and have been buying 40-50 cows each year from the Diamonds with first right of buying cows to go into the 240-cow herd.

“It’s great to see your own cows in the herd and in the next three years we plan to buy another 150 R2 cows, so we have 250 really good cows to take on to a 50/50 sharemilking job somewhere,” Riley says.

“We want to have a small, high quality herd with a very low environmental footprint that we can run in a resilient and sustainable system,” Fran says.

“Ultimately we want to be profitable and enjoy farming,” Riley adds.

The couple are focused on their future plans, and have been working and saving hard to give themselves opportunities.

They plan to be in a position to buy a 250-cow farm after seven years of sharemilking.

“This is a job where you work really hard – so you need to be clear on your purpose,” Fran says.

The Gaisford farm peak miks 240 cows at a stocking rate of 2.2 cows/ha, producing about 107,000kg milksolids (MS), using imports of palm kernel, while silage and hay are made on the farm to feed out on the shoulders of the season and in the winter.

“The low stocking rate puts the pressure on to focus on high utilisation of pasture,” Riley says.

Turnips are grown on 8ha for summer feed as part of the regrassing programme and usually yield 10t DM/ha. The Diamonds apply about 70kg N/ha each year and the herd is fully wintered on the platform. The Diamonds’ aim to operate a low cost, high profit-margin operation.

Riley and Fran are passionate about their cows, saying they are aiming for a good crossbred and efficient working cow – of around 450kg LWT that will produce her weight in milksolids each season. Last season they managed to produce 445kg MS/cow, so 98% of their body weight.

“We like the smaller-stature cows, and need one that has a good mating so we can retain the high genetic merit cows.”

Fran says Riley is a great stockman and has an uncanny ability to pick cycling cows.

The couple have managed to drive the not-in-calf rate down to 6%, 8% and 9% over the past three years and have minimal deaths, which means they can apply culling pressure to build up the genetic merit of the cows. At March 2021, BW was 128/55 and PW 53/66.

“We only breed replacements from the top cows,” explains Riley, “if I don’t like them they will get a terminal sire Hereford.”

“We get rid of any empties and anything that is giving us a headache.”

Fran says she gets attached to the cows and doesn’t really like to cull any, but they have to be tough.

“There are no three-titters kept, and we herd test four times a year so we can refer to the test and get rid of cows that have high cell counts or are consistently underperforming – there are no free lunches in our herd.”

The somatic cell count has been down around 60,000 cells/ml this season with only eight cases of mastitis.

“We culture every cow that gets clinical mastitis through the vets so we know within 24 hours what the bug is and how best to treat it.

“The herd test results are also used to decide which cows to treat with dry cow therapy, and we only had to treat 34 last winter, “ Riley says.

“The little things add up to be the big things.”

Fran has upskilled herself through the Primary ITO production management courses and says she has always been an avid field day attendee where she likes to ask lots of questions.

“I am pretty obsessed with farming and I get a bit excited,” she says.

One thing that gets them really excited are the opportunities they see in dairy farming, with no prejudice as to where you have come from – “there are still opportunities to progress for high calibre environmentally friendly farmers – you can go pretty far if you put your mind to it,” she says.

Fair to say the other thing Fran gets really excited about are possibilities of farming with plantain. When plantain was first planted on the Diamonds’ farm early in the life of the Tararua Plantain project, it was found to have a crucial part to play in the summer dry period, when the plantain was the only green forage in a sea of brown, Fran says.

Along with the turnips, the plantain is not a silver bullet but it is a summer lifeline.

First planted in a mix, with 4kg plantain seed in with 18kg hybrid Shogun seed, Fran and Riley have worked to build the plantain to 10-20% of the sward, regrassing 5% of the farm each year into the mixed sward.

The mix has lasted well over three years, as the two species have a similar growth rate and lifecycle, and while the plantain hides in the spring, it comes into its own in the summer, growing strong up to the optimal temperature of 25C.

While the first pure sward they planted has now been gradually invaded by weeds due to declining density over time, the couple are discussing what practice to best rejuvenate the plantain in the sward.

Possibilities are undersowing it with plantain in the autumn or oversowing with fertiliser in the spring, when the pasture is open and the light gets in to ensure good establishment.

The couple have also planted some pure sward plantain paddocks with white clover, finding them very useful for the cows to graze in before the afternoon milking as they recover from a long walk from the furthest 2-3km-away day paddocks at the end of the farm.

‘We use it strategically for animal welfare – the batt latch drops the tape and the cows walk in to the closer plantain crop where they have a wee break and top up on the low drymatter feed, a drink and a rest – before the afternoon milking,” Fran says.

The Diamonds’ farm does not need the low N leaching feed in order to get a consent from the Horizons Regional Council, as they were already under the N thresholds, but each 10% of plantain they can establish in the pastures gives them a reduction of 2-3kg N leached, Fran says, which gives them head room under their consent.

“If you can get 30% of your sward into plantain, you can drop 10kg N leaching directly observed in Overseer, and for us on a low stocking rate grass-based system where we don’t want to drop cow numbers, and N application and imported feed is already low and it’s not viable to build expensive infrastructure, the plantain is the mitigation that is the most achievable and suitable. It also comes with added summer growth and drought risk mitigation.”

Fran recently took up an opportunity to work for DairyNZ as Lead Extension on the Tararua Plantain Project and a half time role as Extension Partner in the Horowhenua.

The former will see her working one on one with farmers in the Tararua, guiding them through the advantages and logistics of introducing and maintaining plantain in their sward or as a pure sward.

She is excited about the opportunity and the challenge, saying farmers need confidence to make changes and to be successful and she is looking forward to helping them through the process.

“We are really lucky to have this opportunity to make a difference to our N leaching and to make our systems more resilient so I think we really need to focus on the solution and not the problem.”