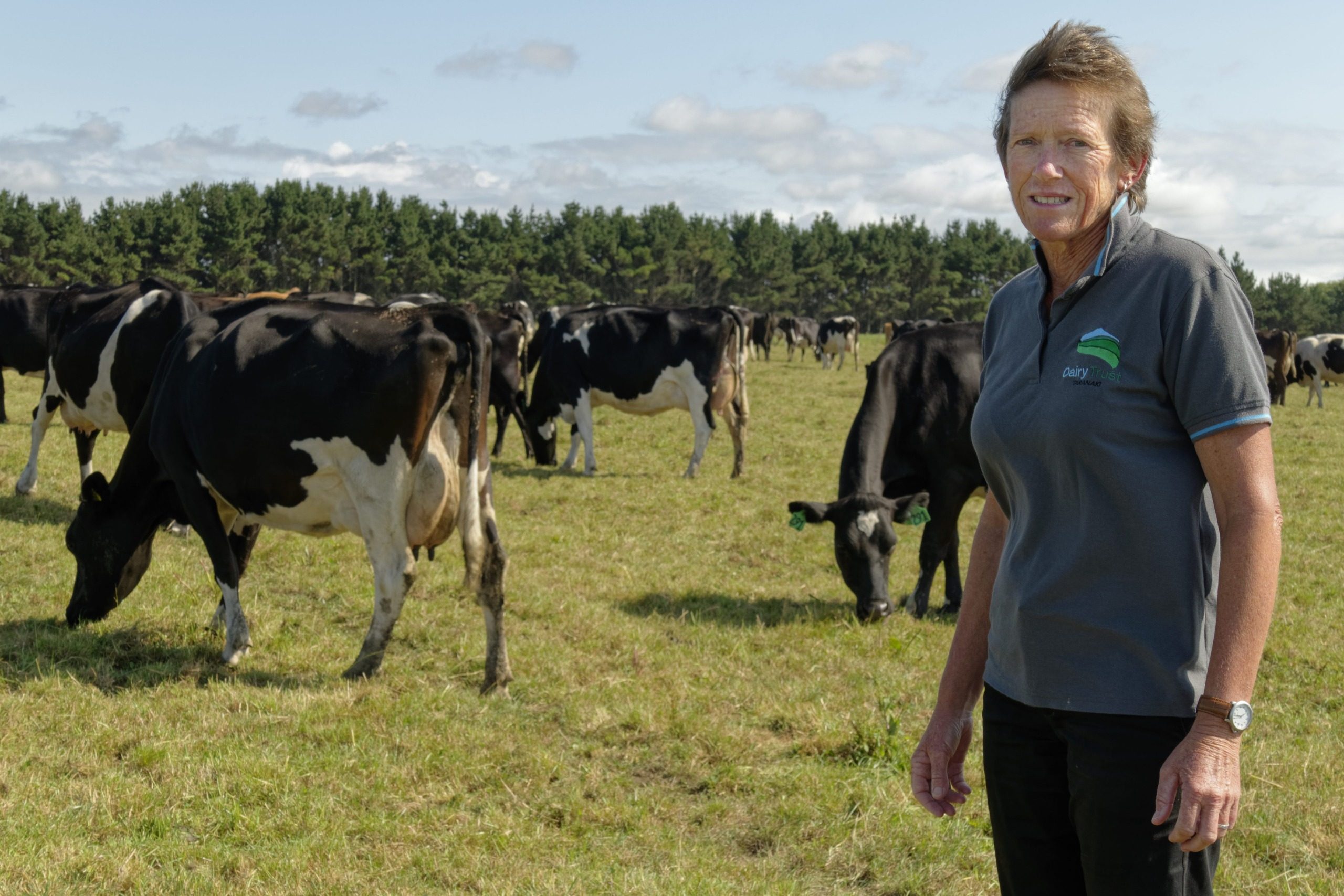 A trial at the Dairy Trust Taranaki Gibson farm has led to herd de-intensification, lowering of nitrogen and imported feed. Jackie Harrigan reports.

Dairy Trust Taranaki Gibson farm has finished the first year of a three year farmlet study looking at the production, economic and GHG ramifications of a future style lower carbon system.
Called the Future Farm, one farmlet has de-intensified to 2.5 cows/ha, lowered N application to 75kgN/ha, and cut imported feed to 300kg DM/cow. In the trial, it has been run with a randomised group of cows alongside the ‘Current Farm’ group of cows run at 3.1 cows/ha, 190kg N/ha applied, and 700kg DM imported feed per cow.
After a year, the results were presented at a Step Change field day in late May.
The path to net carbon zero shows some ambitious targets for dairy farmers, DTT general manager Debbie McCallum said, so it’s important to try out potential systems on the research farm and show farmers how the system works and how the figures stack up.
“We have the ability to take a few risks and try things out and provide answers for our farmers.”
Changes to other partner farms from different Taranaki soil types and rainfall environments have been modelled on similar changes to see the effects of the system changes on their metrics.
After a year, the Future Farm herd had produced more per cow, due to 15 extra days in milk, but were 16% down in kg MS per hectare, so milk income was 17% behind the current farm.
Farm working expenses were down 21% with less N fertiliser and lower per cow costs, buffering operating profit to be reduced by 12% on a $7.70kg MS milk payout.
At a payout of $5/kg MS, the operating profit on the future farm was only $80/ha different to that of the current farm, but at $8/kg MS, the difference was around $720/ha difference in operating profit.

With a very good pasture growing year, the lower stocking rate and longer pasture sward meant the herd struggled to get started in the early spring, she said, but the rest of the year was “not too bad” because not so much N fertiliser was going on through the peak growing periods, Debbie said.

Utilisation was down from 90% to 84% for the Future herd, so the team did some deferred grazing as they had used up the silage conservation budget. The pastures were allowed to grow to around 7-8000kg DM/ha and then the cows grazed them off similar to a crop paddock - after milking funnelling into the deferred grazing for a few hours and then moving through to a normal paddock. It took three or four grazings to get the pasture back to normal levels using the dry cows to get the residual back to normal, but by May all evidence of deferred grazing was gone.

“The deferred grazing worked well and the clover came back after the first grazing and there was no need for bloat oil,” Debbie said.

“It depends on the summer rainfall and can be a good system to react to the season and is a good way to renovate pastures and encourage a new population of ryegrass plants while adding to the drymatter yield.”

The key to good pasture utilisation was doing weekly farm walks, Debbie said, with individual paddock scoring and having good information on a weekly basis to know what the pastures were doing and to keep the cows fully fed.

Mating for the Future herd started five days earlier, to put more pressure on the pastures in early spring when the stocking rate was lower. The date will be moved another five days earlier this season.

The Future herd also has the aim of reducing the bobby calf pool, Debbie explained, so their mating plan was quite different to the current herd. The current herd have six weeks of Friesian semen and six weeks of Hereford short gestation semen, whereas the future herd have higher BW daughter-proven Friesian sexed semen genetics for the first 5-6 weeks, followed by Wagyu for 2-3 weeks and then Hereford Short gestation AB genetics for a further three weeks.

The trial protocol includes an oversowing programme in conjunction with Barenbrug seeds that will see 30% of the Future farm oversown with clover and plantain the first year, with a further 30% in the two following years.

“We are trying to increase the amount of clover, with falling N fertiliser levels, and to introduce plantain in the pastures for increased forage and to dilute urine N.”

Lifting per cow production will help to close the gap in profitability, she said.

Barenbrug agronomist Janelle Gwillum said the best way to establish the clovers was using a shallow drill, scratching the surface to 0.5cm and adding a mix of 5kg plantain and 2kg Kotuku large leaf clover /ha.

Taranaki allophanic soils are good at holding carbon and nitrogen and the Future farmlet showed higher soil carbon and organic matter levels than the conventional farm.

The GHG results showed total GHG/ha dropping 21% and methane in CO2 equivalents reducing by 13% which is basically a result of increased efficiency as the N surplus also reduced by 27%.

In future, the challenge will certainly be improving cow production, Debbie said, saying that increasing by 34kg MS/cow will improve that difference in the bottom line.

“Bringing the calving forward by five days will help, as will the better quality pastures with the improved legume and forage content.”