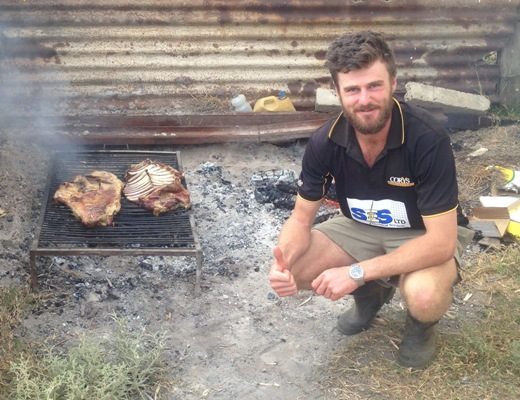 I arrived in Los Angeles in October, after an eight-month stint on the home farm in the Manawatu, to pick up my 1976 GMC camper “Blue Bertha” and return it to Saskatchewan, Canada.

The real adventure began when I sold Blue Bertha and flew from Regina, Saskatchewan, to Bogota, Colombia, with a few Ben Franklins and a pocket guide on how to speak Spanish!

My plan was to drift south for the next four months using buses, hitchhiking and planes. My Columbian agricultural experience was of subsistence farming, where cows are milked by hand and donkeys are still the local John Deere.

I had a fantastic experience as a Gringo gaucho, riding my Criollo horse, Walter, checking water and shifting stock. A couple of huntaways were badly needed!

Tourism is a growing industry and the Netflix series of the cocaine industry should be taken with a grain of salt. The cowboy days of Pablo Escobar have changed, cities like Medellin have turned a new leaf and are now leading the transition into a developed and vibrant city.

Continuing south, I walked into Ecuador along with the fleeing refugees, from the political turmoil in Venezuela. A very disheartening situation where corruption, hyper-inflation and a socialist government have run what was once the most-affluent Latin American country bankrupt.

A memorable experience in Ecuador was helping construct a youth hostel, with four local contractors and three Venezuelans seeking United States dollars, who had fled the Maduro regime. They previously worked as an architect, food truck operator and police officer, but now earning US$15 a day, was more than they could earn in Venezuela. We were mixing our own concrete on the ground and pushing the aggregate 300 metres in wheelbarrows. I now appreciate the technology we have in New Zealand.

After a month of drifting south through Peru and Chile, I arrived at La Mercedes, a sheep and cattle estantia, eight hours west of Buenos Aires.

Livestock agriculture, in Argentina, is still very traditional and the gaucho (cowboy) culture is an important part of rural life. I had a fantastic experience as a Gringo gaucho, riding my Criollo horse, Walter, checking water and shifting stock. A couple of huntaways were badly needed! Drinking mate, (local tea, drunk from a communal cup through a straw), eating asados (traditional BBQ, only meat and bread) and generally living the manana lifestyle. If the job isn’t urgent, it can wait until tomorrow!

La Mercedes is attempting to lift production through rotational grazing and growing sorghum and chicory during the summer and oats in the winter. Livestock agriculture is challenging in Argentina with very little government/industry support, few developed international markets for their produce and numerous animal health issues, like BSE and brucellosis, placing heavy reliance on buoyant domestic demand.

Dual purpose merino ewes with 90% lambing, produced lamb carcases worth $55, irrespective of weight, proceeds were paid per head. The beef industry appeared more successful. There are also cultural challenges, as landowners typically do not work the land and large areas are leased on three or four-year contracts, thus little capital investment is made.

After six weeks of living the manana lifestyle it was time for a change, so I flew north to Iceland! I had secured a job on a sheep farm to help with spring lambing.

There are 500,000 short-tailed, multi-coloured, horned ewes in Iceland, more like goats to a NZ sheep farmer. Lambing is an important time, so family, friends and the odd Kiwi are all called on, to assist in the 24-hour maternity care. After lambing, the ewe and her lambs spend four to seven days, weather dependent, in the shed.

All MA ewes are released with twins and hoggets are released with a single lamb, creating a lot of work for the Kiwi, mothering lambs. Interestingly, the sheep are released in the spring with their skirts on – only the front half shorn – in an effort to keep the lactating end of the sheep warm and milking in bad weather.

I ended my Iceland excursion by hitchhiking across the north to Seydisfjordur, where I boarded a 24-hour ferry journey to the Faroe Islands, for a week’s stay on a dairy farm.

The Faroes are a self-governing part of Denmark and not part of the European Union. However, they have a free trade agreement with the EU, gaining all the benefits without any costs. Reflecting on my travels, I appreciate how fortunate I am to be embarking on a career in agriculture in NZ and would encourage all young New Zealanders to travel.

We don’t know how lucky we are.