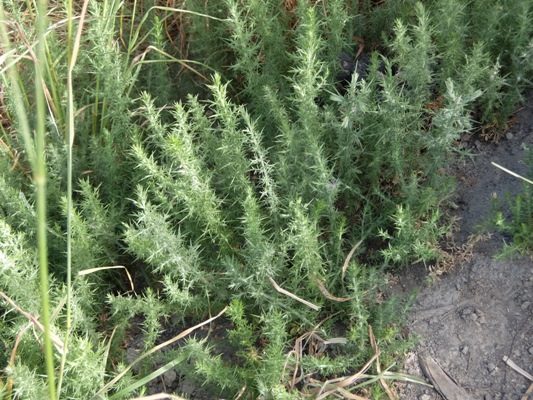 Italian ryegrass is proving to be an effective and environmentally friendly gorse control agent on a trial site on Christchurch’s Port Hills.

Set up in the wake of last year’s fire, the Lincoln University-trial is looking at using various gorse-control methods including chemical treatments and the use of competing vegetation to suppress and ultimately kill gorse seedlings.

Professor Derrick Moot is overseeing the trial work in a gully close to where the fire began. The blaze destroyed vegetation and left the way clear for weed species, such as gorse and thistles to populate the scorched earth.

With the help of an Agricultural Science Honours student, Derrick is gaining an understanding of post-fire plant recovery and ways weeds can be controlled before they become the predominant vegetation.

‘The gorse seedlings are dying because they are not getting enough light and the key to outcompeting gorse is to deny the seedlings light.’

Initial results indicate Italian ryegrass, over-sown on to the charred ground just weeks after the fire, has been very effective at suppressing gorse while generating a large bank of stock feed.

He says immediately after the fire there were up to 650 gorse seedlings per square metre on the 40-hectare trial site, but the fast-growing Italian ryegrass had out-competed the gorse, depriving the seedlings of nutrients, water and light.

“The gorse seedlings are dying because they are not getting enough light and the key to outcompeting gorse is to deny the seedlings light.”

This management strategy buys the landowners time so they are able to replace burnt infrastructure and graze the area with stock, or plant it with desirable species.

He estimates the Italian ryegrass has suppressed 100% of the seedlings where it established well and this is over about 80-90% of the gully area. In a farm situation, the balance can be controlled by spot-spraying with a suitable herbicide.

The Italian ryegrass seed was flown on to the area using a drone at 10kg/ha and while it was initially slow to strike, it grew through the winter and early spring when the gorse was not growing. By the middle of October, the Italian ryegrass was about 40cm tall and has yielded about eight tonnes/ha, effectively suppressing gorse while helping protect and stabilise bare ground.

Derrick says in a farm situation Italian ryegrass could be a valuable tool in helping suppress gorse in the wake of a burn-off. While stock will graze soft gorse-seedlings, significant grazing pressure needs to be placed on the block for control to be effective. The trial work has enabled the landowner to re-fence the area and cattle are now grazing the standing feed. The grazing will reduce the herbage and has therefore reduced the fire risk that is developing again on the laxly and ungrazed areas of the Port Hills.