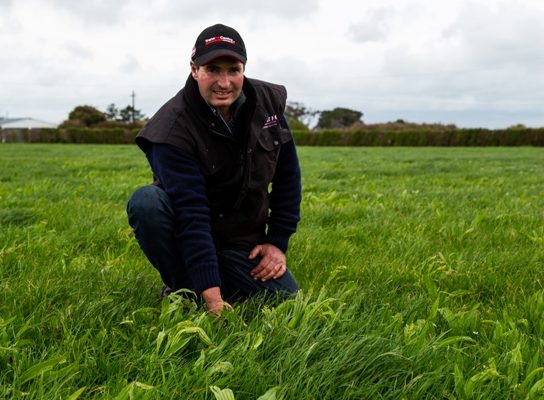 Allan Marx was turned on to foliar fertiliser application when he farmed a wet dairy farm close to the Egmont National park in Taranaki.

“When we couldn’t get the fert truck on to the farm I had to call up the helicopter and apply it as a liquid slurry.

“The application worked so well, it was practically dialling up the grass – but my chequebook took a hit paying for the helicopter.”

Moving further down the Mount Taranaki slopes to Mangatoki he still wanted the grass growth and with no foliar contractor in the area he bit the bullet and bought his own applicator, a Tow and Fert Multi 4000 to do the job himself on the 118-hectare system 2 farm.

Anyone who has seen Allan’s new 12-bay farm shed, chocked full with vintage and current farm machinery, knows he has a mechanical bent, but he says you “don’t need to be super mechanical – its easy to use”.

After a year he is singing the praises of the foliar applicator, saying while he started out cautiously – applying urea, lime flour and potash, he has grown in confidence and now adds in trace elements, seed for over-sowing red and white clover, chicory and plantain, seaweed extract, humates, insecticides and herbicides on pasture and turnip crops.

‘It’s a really versatile tool – I can spray heaps through it – and if something does get blocked I can get the garden hose on to it and blow it out – that’s the best way.’

Moving to lime flour has been a good strategy –Allan says lime was the most under-utilised nutrient on his farm and the flour makes the nutrients massively more available to the soil microbes than aglime.

He says as a rule of thumb, if he can dissolve it (the fertiliser) in a bucket he can keep it in suspension in the Tow and Fert.

The elements are kept in suspension by the PTO attachment agitating the mixture in the barrel of the machine and pumping the mixture around through the booms.

Only 10% of the mixture going through the boom is sprayed out, the rest keeps circulating so the liquid maintains uniformity.

“It’s a really versatile tool – I can spray heaps through it – and if something does get blocked I can get the garden hose on to it and blow it out – that’s the best way.”

Allan makes all his own hay and silage on the farm and produces 156,000kg milksolids (MS) from the 330 crossbred cows.

The cows also get 2.5kg each of high energy pellets with 1kg palm kernel/cow in the dairy through the in-shed feeding in spring and a little palm kernel in summer.

Last February/March the weather was dry and the cows went to OAD and then 16-hour milking but Allan was pleased with the way the grass held on – much better on his farm that anyone else’s, he says.

“As I drove around my farm it really looked different to everyone else’s and that paid off in the vat.”

Driving down nitrogen fertiliser use on his farm was made easier by applying his own fertiliser, Allan has found.

“I wanted to cut down from 180 units of N – my use had become a vicious curve of more and more N use – it was so easy to ring up the fert truck and pile it on.

“But I could see we needed to cut down and no-one knows where the new government rules would go so I figured I would need to start applying it myself because there was no one around here offering the fine-particle application that I wanted.

“Now we are down to 140kg last year and this season I am trickling on 50kg urea/ha every second round.”

The second application of urea will go on in early December and so far only 25kg of N has been applied – “so not a lot of N on the farm so far this spring – but that’s the way we are going to have to start farming, I think, in the future.”

Last year’s Barkant turnip crop was an experiment for Allan.

He used the Tow and Fert to apply insecticide with one of the N applications and the crop grown for late summer feed tipped the scales at 19 tonnes/ha with “bulbs like fodder beet” Allan says.

“The crop was great – it really kept its leaf quality too and grew on 50+50kg urea with some seaweed extract.”

The seaweed extract comes from Norway and is used as a biostimulant by Allan to encourage the soil microbes.

“We want more action under the ground – getting the soil biology right is really important – and the green stuff on the top is the result.”

The successful turnip crop gave Allan confidence to add Roundup into the machine in the autumn, with two litres/ha Roundup added to 25kg urea/ha that “blew the weeds out of the ground prior to cultivating the paddocks and going back to grass.”

That seemed to work so with new-found confidence he had “a go at blowing some paddocks of grass out to sow in his annual prior to the next summer’s turnip crop.

“I only used 2l of Roundup which retained the clover – whereas a contractor would come in with 4l Roundup, by me adding some urea it makes Roundup work a whole lot more efficiently – so the clover stayed and I drilled the annual into it.”

Now he is about to spray out the annual and put in the next round of turnips, and he says he can do all of that with his Tow and Fert.

“I am going to have a go at using T-max to get rid of the docks and then will apply the insecticide through the machine too – by following the same wheel tracks all season I can spray a 20-metre swathe and use the same tracks.”

“We have had a pretty good play with the machine now, and have over-sown 2kg/ha of clover, chicory and plantain around the whole farm – that’s been really successful.

“As we start to head to reducing N leaching the chicory and plantain will help – and the cows really like the variety too.

“This year I will probably go around and just over-sow more chicory at 1kg/ha mixed with the urea. The plantain lasts better in the pasture – it’s better at reseeding itself.”

Through the late spring he is planning to over-sow last year’s new grass (which was weed sprayed in winter) with a brew of red and white clover, chicory, plantain, urea, potash, lime flour, seaweed extract (ascophyllum nodosum), liquid selenium, leftover gypsum from the springer mob and magnesium sulphate.

A spring with only five cows with milk fever, and only one that sat down, made an easy start to the season and Allan says he hasn’t seen any grass staggers on the farm in the 17 years he has been there.

He says he is a great believer in potash as the Taranaki volcanic soils do not hold it and the potassium nutrient has been applied over the past 10 years with the urea.

“I have kept that going, applying potash into the mixture with the Tow and Fert and it is minimising the bloat risk, along with rumensin in the feed in the shed.”

He still uses the ground spreader to apply maintenance fertiliser of 300kg superphosphate/ha and is adding boron for clover health.

Foliar fertiliser application has the potential to halve N use on dairy farms, by doubling the pasture response to the application of that nitrogen while also reducing the amount lost to leaching.

“They are really versatile machines, able to apply multiple products and finding favour in the market as farmers find a return on investment of 12-18 months both by applying the fertiliser themselves and allowing less passes by combining dressings.”

Easton reports business has been brisk for the past year as clients see the potential to drive down nitrogen application to meet plan changes particularly in Canterbury and Southland.

Anecdotal trial results from Tow and Fert manager Michael Smith, an ex-dairy farmer and Tow and Fert user, showed pasture growth at a cost of 4.5c/kg DM compared with a 11c/kg DM from granular N fertiliser, in a split farm trial in Southland.

The foliar fert side grew 2.2 tonnes more pasture/ha with 30% more cows and 10% more heifers in calf, an overall 8% empty rate. The herd also had a huge improvement in the cow health when milk fever dropped from 5-6% of cows down to less than 0.5% by applying magnesium oxide and lime flour in liquid form prior to grazing. Lameness also decreased by reducing nitrogen application, from reduced nitrites in urine patches.

Environmentally, the smaller and foliar applications led to lower leaching with the plants using all the N as the particle size was small enough to be plant available.

“The nutrient in liquid form can go straight through the plant cell wall within 6-24 hours, so is picked up on the day it is applied,” he says.

“By feeding the plant what it needs, you don’t lose anything by leaching – you are farming like a hydroponic system.”