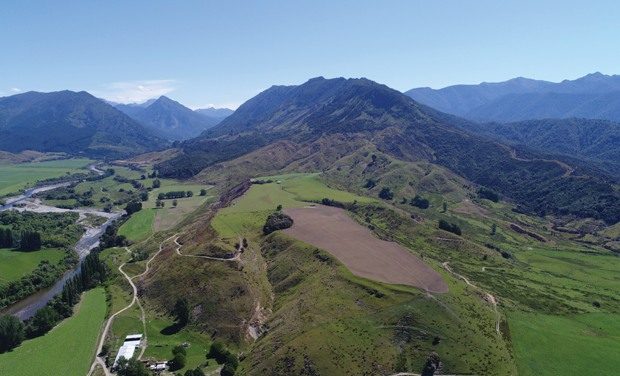 Backgrounds in shearing and dairying gave a Tasman couple the ability to invest in stock and plant on the leased farm they are developing. Anne Hardie reports.

Kerry and Pam Irvine have invested in the farm in the Wangapeka Valley, west of Nelson with the goal of building production on its drought-prone hills.

The farm is at the end of a shingle road that meanders past irrigated hop and dairy farms before reaching their dry block that has a sudden ascent from flood-prone river flats and terraces to the near vertical peak of Mount Jones. All up they farm 700ha, but only 380ha of that is effective and native grasses cover the hill country. That leaves the river flats and terrace to concentrate on pasture development and crops to boost production.

When they took over the farm eight years ago, it had been a weekend retreat for Kerry’s father who ran a business in town and enjoyed its isolated location. He ran sheep and cattle, seeking help from Kerry and Pam at shearing and tailing.

The farm was carrying 1500 Perendale breeding ewes scanning just 112% lambing, plus 70 “liquorice allsorts” breeding cows. It was unfortunate timing as they paid $130 average for the ewes and prices immediately dived, but 20 dairy cows milked in a four-bail shed kept their heads above water.

Pam comes from a dairy background and the dairy cows were part of their “coalition deal” on the farm. The cows were the result of five crossbred calves given to them as a wedding present. From those 20 they reared 50 Friesian bull calves each year, plus the cows’ own Hereford-cross calves, fed pigs, lambs and chooks. It all helped to produce a $20,000 in profit for their business at a time they needed it.

“It kept us afloat,” Kerry says.

They only needed to milk the cows for four months and Pam continued milking the cows after their first child, Jackson, came along, but hung up the cups when their youngest, Ashley, arrived and it became too difficult to combine kids with milking.

They have been slowly dropping sheep numbers and increasing cattle numbers which have less work while the kids are young – partly to make it easier and also to enable them to have more family time, Pam says.

“It’s for our own sanity and everything will change again once the kids get older.

They are now down to about 1000 ewes after dropping 200 in last year’s drought.

Despite low lambing percentages in their first year on the farm, Kerry says the ewes had good genetics from using rams sourced from Mt Guardian Perendale Stud in North Canterbury for years and have proven ideal on the rough hill country. The challenge was feeding them.

“They’re survivors. When we took over the farm the average pH was 5.5 which is next to nothing and Olsen P levels were only slightly better.”

Finances has restricted the rate of improvement, concentrating on the river flats and terrace where they have cropped between 10 and 12ha a year for winter and summer feed, before regrassing. Every paddock was soil tested and given their specific fertiliser requirements plus 4t/ha of lime. The cropping regime has entailed a winter crop of turnips for the ewes. It is followed by a Pasja summer crop for lambs that will take them through to about the end of March when the lambs are all gone and the ground can be sown in grass.

Winter turnips were chosen over swede because it meant they didn’t need to take the paddock out of circulation for as long and Pasja has so far been a fail-safe option for them. The Pasja ll forage brassica costs $505/ha by the time they have paid for seed, fertiliser and drilling and gives them the ability to finish lambs. It still struggles through the drought, but an important aspect is they don’t have to transition lambs onto the crop as they would have with rape.

Initially they planted Alto ryegrass after crops and tried high-sugar Aber because Pam had liked it so much in dairying, but the dry dealt to it. They now choose One50 and that has proven to be a keeper as it is the first to bounce back after droughts, with some white clover added into the mix as well. The past two summers have been the toughest and this year they had just 13ml of rain between Christmas and the end of February, with temperatures in the valley often soaring into the 30s – and even early 40s last year. The effect is brutal though they try to finish as many lambs as possible. Even the feed crops and One50 paddocks were struggling this summer.

Outside the paddocks being developed, the rest of the farm has been receiving just maintenance fertiliser. This year they flew fertiliser on to the hills for the first time including 360t of lime at 4t/ha and 60t of superphosphate at 800kg/ha. While the hills will still have just native grass species, the sheep will hopefully graze it better and improve it beyond tag.

Lambing is delayed until mid-September when there’s more chance the weather bombs are finished and there’s enough grass ahead of the ewes and lambs.

Also the rams aren’t being put with the ewes when the farm is still gripped by drought. Between crops, fertiliser and regrassing paddocks, scanning has improved to 164%, with a tailing of 141%.

At lambing, Kerry does a lambing beat around the two-tooth and triplet mobs and wonders whether the triplets are worth it as they lose so many lambs in that mob. This year Pam is in charge of the triplet mob to try and increase survivability.

With a late start to lambing they miss the pre-Christmas prices, but Kerry says they get a better lamb on the ground than they would achieve by lambing earlier when feed is short.

“On our farm if we go too early the lambs stagnate and tend to take longer to recover.”

Weather always throws a spanner in the works and this year the drought was preceded by cloudy, cooler temperatures where there just wasn’t enough sun to get good grass and crop growth – plus one of the Pasja crops on the river flats was drowned in a flood and struggled to get going before the drought set in.

It meant their first draft at the beginning of January was less with just 220 lambs drafted off their mothers, but still averaging 18.4kg CW and returning $143. The rest of the lambs are weaned and those they plan to finish go on to Pasja while replacement ewe lambs go on to grass and will be allowed to grow out to two-tooths before producing a lamb.

The rest of the lambs are off the farm by Easter. On average 85% will be finished with the remainder sold as stores in time to target the vineyard and orchard grazing market in the region.

Kerry says 7-800 lambs can go on a crop and with two to three paddocks of it, there is time to regrow between grazing lambs.

“You don’t fatten a hell of a lot of lambs on native grass.”

The liquorice allsorts cattle herd has been moving toward Hereford breeding cows, mainly for their nature and hardiness on the hills.

They calve from September and the calving heifers which have been on a crop of turnips from late July are fed silage, hay or balage. It’s mainly for extra feed, but also to help quieten the cows so they can check calves and keep an eye on calving. The older cows which have also had silage, balage and hay through winter are on the hills for calving with supplements put out every few days at the base.

They make their own pit silage from 10-12ha each year to feed the cattle, which they describe as money in the bank. Because they make it themselves, it is also cheaper than balage.

Pre two kids, they both drove tractors at silage time – bonding time laughs Pam – using a Mengele SH30N silage chopper that was amalgamated from two they bought at clearance sales for a total cost of $3,000, plus their first silage wagon at $500. They’ve since upgraded their silage wagon with one that cost $5000 and now get a truck in to collect the silage as two children in a cab are harder to manage than one.

“We did everything ourselves,” Pam says. “Silage making used to take a week. We would have two tractors going side by side and I miss that.”

While silage is great, it does mean they have to shut a paddock up to grow it and take it out of the system. The past couple of dry years they haven’t been able to grow as much of their own silage and have bought in balage. This year they also added oats into the heifers’ diet at the start of calving which is an extra cost at $110/ha plus drilling at $158/ha, but Kerry says it was worth it.

“It does cost but what is the cost of not being able to feed an animal in early spring when milk supply is as good as it’s going to be?”

About 50 weaned non-replacement calves head to the Brightwater sale at the end of March each year and the older cows head back to the hill country.

“We would like to be able to fatten the calves but there’s no point pretending to be something you aren’t,” Kerry says.

They were having problems containing the replacement heifer calves at weaning so Kerry erected deer fencing around a small paddock and that works well.

As well as the farm workload, Kerry is Nelson Federated Farmers’ meat and wool chairman which takes him away from the farm and he says he has always believed New Zealand farmers needed a voice at a political level. He is also a commentator at shearing competitions, covering A and P shows around the Top of the South, Christchurch A and P Show and north to the Golden Shears.

At farm level, their short-term goal is to reach 300 finished lambs at their weaning draft and further develop the hill country. While long term, they plan to reach a financial position to be able to buy the farm.

vamtam-theme-circle-post
 Category Subscriber - Country Wide
Ben Allott principle that I have really taken away from my involvement in the RMPP...
 Tags Animal Health
Read More

Breeding to add valueFamily does the basics well