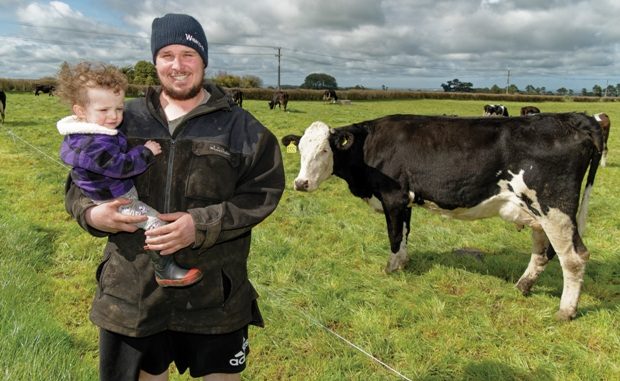 Richard Radich is a man with a mission and after years of research is intent on his purpose, building his herd of Fleckvieh cows on his Kaponga farm.

Taranaki has always been home to some of the more exotic European dairy breeds, but Richard says the Austrian Simmental-derived Fleckvieh breed is anything but fringe in the rest of the world.

The 28-year-old farms 50:50 with his parents, Mark and Jeanette Radich, on their 129-hectare farm and as an equity partner with brother Chris on a smaller 36ha block next door high on the flanks of Mount Taranaki north of Kaponga.

While he says he tried plumbing when he left school, he pretty soon gravitated back to the family farm and says, “this’ll be me for life.”

But rather than dig in with the Friesian cross cows he heard about the dual-purpose Fleckvieh breed and started doing some research online and by contacting farmers overseas.

“I originally saw them on the internet and as I found out more about them I rang up people in places like China and Austria and Australia.

‘The Austrians are getting huge amounts of genetic gain as they are using lots of genomic bulls and they are proving much faster than daughter-proving.’

“There are 42 million of them overseas – they are one of the world’s largest breeds – and no one I talked to had a bad thing to say about them so I started to try to hunt some down.”

Northland farmer Ian Lupton was an early and one of the very few adopters of Fleckvieh cattle in New Zealand but his herd was put up for sale when he sadly died of cancer.

Richard found out about the sale late in the piece and three years ago rushed up to attend but only managed to buy 45 mixed-aged cows – the rest went to the meatworks which he was gutted about.

“But I sold all my high-figure Friesian- cross cows to the South Island and bought in the Fleckviehs at $1100 each so I was stoked at that – they don’t owe me much.”

While none of the exotic cows had figures he can’t say enough about the production and performance he has had from them.

“We have never had one get lame or mastitis or miss getting in calf – they are so robust they have the strength of a beef animal but produce more than a Friesian.”

Richard’s Fleckviehs run on the small farm he owns with his brother Chris and the herd produces 500kg MS/cow of A2A2 milk on a diet of straight grass and 1.5 tonnes/cow/year of feed through the in-shed feeding system.

Sourcing semen through Samen genetics Richard has been breeding Fleckvieh and Fleckvieh-cross calves.

In the first year he went half LIC Friesian high input team and half Samen semen to see the difference in the calves and was impressed by what he saw.

“The Fleckvieh calf growth rates are huge compared to the Friesian cross calves, and calving is no problem – with the shape of their heads and shoulders they just slide out – the cows pop them out like sausages – and are so calm and docile they keep on eating,” Richard says.

“We have only calved two or three out of the 200 calvings we have had.”

After two years of comparing the offspring from the two breeds he was convinced and is going 100% Fleckvieh over the big herd as well. Next year will see 50 Fleckvieh heifers enter the herd and all the calves will be at least 50% Fleckvieh.

A trip to Austria last year to check the Fleckvieh out on their home turf helped to convince him.

“They were pretty amazing – with average herd size of 30 and kept inside we couldn’t really compare but the cows were doing well over 10,000 litres in a season.

“The Austrians are getting huge amounts of genetic gain as they are using lots of genomic bulls and they are proving much faster than daughter-proving.”

Reassured of the versatility of the breed, when Richard decided to transition the whole herd he approached Craig Mckimmie at Samen to find him two-four overseas bulls out of the catalogue of hundreds.

Craig visited the farm and helped Richard go through the cows one by one to decide on the semen for them.

“It’s an amazing service – he was here on farm a week after I called him for help.”

When selecting semen, calving ease gets a big tick, low cell count, high daughter fertility with all holding to semen in the first round and milk production are all important.

Richard is looking forward to seeing how long the cows last in the herd, as the Fleckvieh herds overseas have cows who have produced for 10-12 lactations.

“We were replacing our Friesian cross herd every four or five years with udder oedema and feet giving out – some heifers weren’t even lasting to three years old, their udders were not handling it.”

He is impressed by the udders on his Fleckvieh cows, saying they are very tidy and help up high – almost like a beef cow’s udder.

“The first-calvers don’t really crank up like the Friesians. But after that they don’t seem to have heaps of milk but put the cups on and whoosh the milk all comes down.”

“We had to put in another receiving can because they were flooding the plant.”

He pointed out one of the ‘girls’ who is doing 4kg milksolids (MS)/day.

The breed has a marked difference in lactation curve.

“The curve is really flat – they sit on over 2kg MS/day for a large part of the season.”

The robustness of the breed means he has chopped his animal health costs per cow in half.

“With very little mastitis and no lameness they really are cheap to look after.”

CASHING IN ON CALVES

Fertility of the Fleckvieh cows ticks Richard’s boxes with high in-calf rates allowing him to drive down the rates of replacement within the herds on his big and small farms.

“The cows hold on to their condition so rebreeding rates are great – we have had not-in-calf rates as low as 3% and only as high as 8% with a 12 week mating.”

The Fleckvieh bull calves and crossbred Fleckvieh heifers are like a beef cross and one buyer takes all the excess calves – bulls and heifers – paying Richard $220 each at four days old.

He is interested to see how the progeny will perform for the finisher who buys from his calf rearer.

He says the Fleckvieh calves are a couple of weeks earlier getting to weaning – which is a good saving in milk and meal.

“They should be getting more dollars at the works from higher carcase weights.

“I know they taste good too and have a great-yeilding carcase.”

Is there a downside? Richard wracks his brain and says the protein and fat levels are slightly lower than Friesian cross (around 4.3% fat and 3.7% protein) but he thinks that can be lifted with smart genetic decisions and herd testing to identify lower performers.

The cattle also have a thicker coat than the Friesian – so the calves tend to walk through the electric fences because they don’t really feel the shock.

But the cows are so quiet they don’t even try to get through the fence – “they are too contented.”

The thick coat helps them withstand the metre of snow on the ground back home in Austria and the high temperatures in the likes of India and Kenya, where the breed is popular.

But on the plus side he says they are great foragers and have 30% less impact on the environment.

“They can turn long shit grass into milk – and they would be great on a hilly farm.”

The Fleckvieh breed is gradually growing in NZ, Richard says, with many farmers dabbling in the Samen genetics.

“It’s a big leap to take your whole herd to another breed – that’s a why we went to Austria to have a look at them and reassure ourselves – we were so impressed – they were outstanding.

“Taranaki runs on LIC-bred cows with BW and PW records– but cow prices are low currently and no one wants the cows with low or no figures.

“But it doesn’t worry me – I’ve got nothing to lose – those figures are just numbers on a piece of paper to me. I bought great cows at a low price and am breeding all of mine to Fleckvieh.

“I think it’ll be the next big craze.”

Richard is more than happy with his herd, saying that as long as they keep working he will carry on with the full Fleckvieh herd.

“We herd test twice each year, at the end of November and at the end of the season – to make culling decisions – we need to know if there is anyone who isn’t working – they all need to work.”