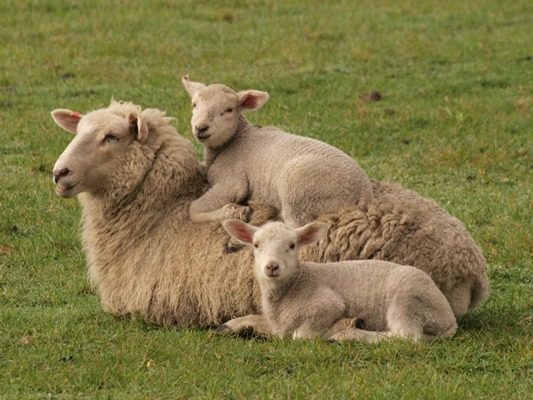 One of the keys to healthy lambs is healthy ewes. Tony Leggett explores how farmers can capitalise on good nutrition for optimal lambing results.

Take a bow, sheep farmers. Collectively, you have achieved a 56% increase in the weight of lamb produced per hectare in the past 25 years.

Lambing percentage has increased from around 100% average to 125%, lamb carcase weight is up an average of nearly 40% and weight of lamb per ewe is up a massive 89% since the early nineties.

Her work in ewe and lamb nutrition is already opening new thinking for farmers at the top end of performance.

“We want to understand more about how to capitalise on (ewe) fecundity. Multiples are good but we know we can get into difficulties with triplets and quads at lambing time,” she says.

Above 200% scanning is when quads and quintuplets start to appear.

McCoard says between 15% and 20% of farmers already have flocks scanning 40% triplets.

“That could be a future opportunity, but currently we still have issues around lamb survival. It’s critical that we consider lamb survival and welfare especially in flocks scanning at that level or above,” she says.

“Finding out where the optimum is for each farm is the key and that does vary depending on where you are farming.”

In terms of feed efficiency, a ewe that has twins uses 60% less feed per kg of lamb weaned, simply because she weans significantly more lamb for the same maintenance feed cost as a single bearing ewe.

Greater efficiency is increasingly vital in terms of future-proofing lamb production on hill country. McCoard says research is showing a 20% reduction in greenhouse gas emissions and a 40% reduction in nitrate leaching per kg of saleable product for ewes weaning twin lambs over singles.

“That’s quite a significant environmental benefit if we can capitalise on that fecundity, and it’s especially important to the future of our hill country farming sector given we could face limitations on stocking rates in the future.”

“It’s another driver for getting more out of individual animals.”

However, McCoard says this needs to be balanced against the risk of higher lamb mortality and slower growth rates in multiple lambs. Typically, losses range from 10 to 40% of lambs born, creating a real risk to public perception and market access.

Slower growth rates are also a feature of lambs born as twins, triplets or quads because they are smaller at birth and grow slower, increasing post-weaning feed costs to reach slaughter weight and reducing the overall capacity to finish lambs on hill country.

There are ways to lift the weight gain of lambs on hill country farms, through improved genetics and better, more targeted feeding of ewes carrying multiple lambs before and after lambing.

Lamb survival is a very complex challenge and there is no silver bullet for improving it, McCoard says.

She says optimum birth weight for lambs on hill country farms is about 5.5kg and most of the problems occur at both the very low and very high end of birth-weight bell curve.

“At the low end, you get starvation and exposure losses, while at the high end, dystocia is the challenge. You have to feed ewes correctly and target the optimum,” she says.

The final six weeks before birth is when the lambs inside the ewe put on 75% of their final birth weight.

The ewe’s placenta is fully formed 10 weeks from lambing and that’s what provides the nutrition for the lamb to grow rapidly in that final few weeks before birth.

If ewes are underfed at this time, ewe body condition score (BCS) drops and that drives down lamb birth weight, affecting their survival.

“Keep a consistent BCS of 3 to 3.5 and use ewe scanning to know how to prioritise feed to multiple-carrying ewes over singles.

“Consider fetal aging the ewes because it is very useful in final four to six weeks of pregnancy to sort out lambing mobs and prioritise the best feed to those multiple ewes nearest lambing.”

To illustrate the sharp increase in feed required to achieve good lamb growth rate in lambs born as multiples, McCoard says a 70kg ewe carrying twins (ram out April 5) on a farm targeting lamb growth of 300g/day post lambing, requires about 1.8kg DM/day at day 100 of gestation. But by lambing time roughly 50 days later, that same ewe’s feed demand is up to 3-3.3kg DM/day.

Ewes carrying singles only require about 2.1-2.3kg DM/day for their lamb to achieve that same growth rate post weaning.

“So, there’s a big shift in nutritional demand as you near pregnancy so most farmers will need to separate out singles and multiples to prioritise feeding,” she says.

“And, remember, feed quality is also critical because if it’s low quality, a multiple carrying ewe might not be able to consume sufficient feed to maintain body condition score requirements.”

Earlier research confirmed that if a loss of 1 BCS will result in about 8% lamb losses in singles and twins, 15% in triplets and 20% in quads.

“If you haven’t got the nutritional requirements met, a ewe will take it off her back and you will end up impacting lactation potential too,” she says.

If feed intake is below the level required, the ewe prioritises the lambs inside her over developing her mammary gland to lactate to her potential after birth.

Lambs will start eating grass from about one week, and by week 4-6 they are consuming 50% of their nutritional requirements from pasture.

“So, the message here is plan the feeding of ewes and her lambs. If you have high lamb percentage, then you need to do feed budget that allows for this, and you need to plan on feeding both,” she says.

Feeding also important for immune function in lambs. They receive passive immunity from their mother in first few days after birth but there is a short window before they start to develop their own active immunity. Lambs are most vulnerable between day 5 and 14.

About 80% of lamb mortality is caused by starvation, hypothermia or mis-mothering, and it usually happens in the first three days of life.

McCoard says lambs born as multiples are most at risk, especially when ewes are underfed, because they produce light lambs with poor temperature regulating ability and lower reserves, critical for that first few days of life.

“Weather is not the only thing to blame. If we don’t feed our ewes correctly, we know we’ll get lighter lambs, and smaller lambs lose more heat from the same surface area than bigger lambs,” she says.

A focus of research in recent years has been on the effect of insulation provided from the birth coat, wool and skin depth.

However, it is the feeding of ewes that has the most substantial impact on lamb survivability.

If lambs are born to ewes that are underfed, they will often have a difficult, longer birth. Those lambs will usually be oxygen deprived, start life dopey and take longer to recover.

A critical but still not completely understood contributor to lamb survival is the amount of a special stored fat that lambs lay down around their kidneys and in the shoulder region. Called ‘brown fat’, it is not the same as the fat found over the loin muscle in a lamb or around the kidneys of an adult animal.

After birth, special enzymes are released into the lamb to metabolize that ‘brown fat’ which generates heat. McCoard says half the heat produced in a new born lamb comes from this brown fat.

They also need skin thickness and vigour to suckle well in those first two days after birth when colostrum intake from the ewe is critical to future performance.

Most of the other half of the warmth generated by a lamb comes from shivering – termed thermogenesis. However, shivering is an inefficient process for generating heat so the more of this brown fat they have the better off the lamb will be.

Research has shown that ‘brown fat’ forms during gestation from about day 80 and rapidly increases to term. It starts generating heat at birth but disappears within 2-3 days.

Fortunately, feeding to maximise ‘brown fat’ deposits matches the fetal growth curve which requires a good increase in intake from a similar stage of gestation.

Other research has shown that the potential number of muscle fibres is set by mid-gestation, around scanning time, and they increase in diameter and length through to birth and beyond. Again, ewe nutrition is critical to setting the potential of this lamb to grow fast and finish after birth.