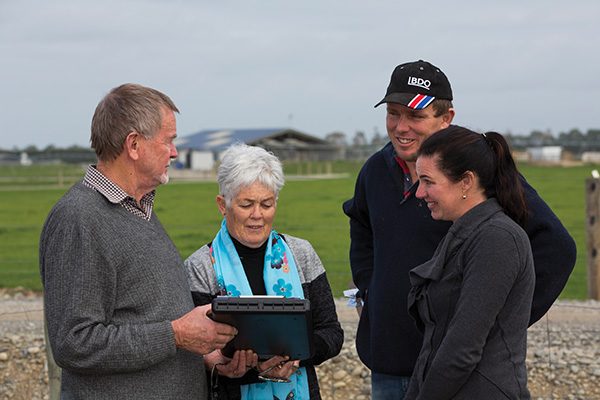 Dairy farmer Carlos Cuadrado urged others wanting to grow their business to behave like an Oxpecker bird and partner with a bigger player. Anne Lee reports from the SIDE conference.

Find your rhino – that’s the message from Argentina-born dairy farmer Carlos Cuadrado to those looking at ways to progress and grow their business.

He likens the partnership he and his wife Gisela have with established farmers to that of the Oxpecker bird and the rhino.

The rhino is the big animal that wants to get on with it while the Oxpecker helps with the small stuff.

Carlos is from a dairying family in Argentina and came to New Zealand with his wife Gisella in 2002.

Both have agricultural degrees and quickly grasped the Kiwi, grass-based dairy system but it took returning to Argentina in 2006 for a short stint to realise they were ready to fully commit to living and farming here and go after the opportunities they knew existed.

They had arrived with nothing but working hard and taking every opportunity to learn was the first step – whether that was through courses, DairyNZ discussion groups and specialist workshops, reading, conferences or talking to other farmers, Carlos says.

Getting good at what you do and building a reputation as a hardworking, good person is key, he says.

It was their reputation that saw their farm owner agree to take them on as variable order sharemilkers on their 900-cow farm and it was their absolute focus on building farming skills and the strictest of cost control that allowed them to build equity.

Their efforts, presence in the community and results got noticed by other well-established farmers and in 2012 they were approached to join a 560-cow equity partnership with Greg and Rachel Roadley and two other couples.

Earlier this year the partnership was dissolved and Carlos and Gisela bought the Oamaru farm while continuing to variable order sharemilk the 900-cow farm and oversee it for their owners who now live in Australia.

“Your rhinos are out there – find out who they are and find out what they want.

“You can’t tell people what they need, you have to think about what you can add to the business of the rhino.”

Sam and Anna O’Reilly have also achieved farm ownership through an equity partnership.

They climbed the progression ladder from wages to a small 180-cow sharemilking job and on to a slightly larger sharemilking job, both in Waikato before they decided to head to the South Island for the scale they knew they needed if they were going to achieve the farm ownership goal.

The first step was a 750-cow job and a massive learning curve, arriving into a snow storm with a six-week-old baby.

But Sam says hard work, hunger for information and learning and building a strong relationship with their farm owners enabled them to progress with those owners to a 1100-cow farm.

“All we’d had was my parents going guarantor for us and we were able to take that off then but the following year the payout plummeted and we found ourselves in a bit of trouble.”

They’d already built a great reputation in the district which saw a “local benefactor” buy 300 cows from them and lease them back to them for 12 months when Sam and Anna could buy them back at the same price.

“I’ve never been so tight on a budget in my life.”

Later that year they found themselves at the epicentre of the magnitude 7.1 Darfield earthquake which damaged their farm dairy. Resilience, problem solving skills and valuing their team got them through as it would just over a year later when their second daughter, aged two, suddenly came down with the paralysing Guillain-Barre syndrome which meant months in Starship Hospital, Auckland, before she recovered.

“While all this was going on our former bank manager, who knew our farm ownership goals, had put our names forward to an older couple who were looking for an equity partner.”

“The farm had been in the family for 80 years but their children had all gone into other professions.

“There were a lot of meetings and interviews and it was a tough time dealing with everything that was going on but it was a fantastic opportunity.

“We did our own due diligence and knew we could be in business with these people.”

They did a governance course all together and the deal was sealed with Sam and Anna able to go in with 30% equity to create Carriante.

Continued hard work and an eye on further opportunities saw Sam take up the operations manager’s role on a 1500-cow, two farm-dairy property for absentee owners and bring their 2IC up to manage the equity partnership. They moved to a house on the larger operation and are now 50% equity partners in Carriante. In addition, they are on track to take full ownership within the next five to six years.

“You have to have an open mind and be prepared to be flexible, look for the right people and do your homework,” Sam says.

Life throws plenty of curve balls at you so learning resilience and building strong relationships can keep you on track.

Anna is a trained teacher and investing a proportion of their earnings into private school education for their three daughters has been a priority.

“You have to make sure what you’re doing, what you’re investing in fits with your long-term goals and your values.”

Canterbury farm advisor and farm owner John Donkers has been involved helping people on both the ‘get in’ and ‘get out’ side of the equation.

The family farming business Camden has partnered with several staff and young people to their mutual benefit but a big driver has been to help those valued younger staff progress.

It’s resulted in some achieving farm ownership both outright and in partnership.

John’s also worked with owners, including Sam and Anna’s partners, in the stepping out part.

Reputation is huge, he says.

“Don’t annoy the rhinos. It’s a small world, New Zealand is small and dairying is a small business and in the South Island even smaller – don’t burn your bridges, network, talk to people.

“Don’t underestimate how big a deal it is for
farmers getting out. There’s a lot of emotion, there can be a lot of frustration at learning to let go,” he says.

It must be well planned – even five to 10 years out because there’s a significant financial aspect to it and a mental aspect too. It requires trusting others and a whole new level of communication if they are taking on a sharemilker or equity partner.

The rhinos need to be looking around for the right Oxpeckers too, he says.

Any partnership that results in a drop in annual income has to be affordable and the timing relative to market highs and lows has to be considered along with tax implications including those associated with livestock and machinery sales.

If you’re investing with, partnering with or selling out to family the due diligence, planning, communication and structures need to be even more rigorously dealt with because long term family relationships are at stake.

Leasing out the farm

Farm owner, LIC New Zealand markets general manager and passionate advocate of the dairy sector Malcolm Ellis says the decision to lease out the farm he owns with wife Jody wasn’t one taken lightly but it’s given them the freedom to pursue other interests while maintaining their asset, maintain their interest in farming and allowed them to see others grow.

“Don’t underestimate the fulfilment a farm owner gets from seeing others succeed.”

Over a 10-year period of owning two farms and milking about 1000 cows, he and Jody had seen eight couples move on to sharemilking and six have now bought their own farms.

“Farm ownership has never been easy but I assure you it’s always been possible.”

“Plan but be ready to be agile.”

Malcolm says he spent a lot of time getting into dairying as a fourth-generation farmer, worked all hours but wanted to pursue the herd improvement passion through his work at LIC and Jody wanted to get back into teaching. They needed to take some complication out of their lives and had decided to lease out the farm but at the same time had been working with previous staff helping them do the numbers on going sharemilking elsewhere. Malcom says having that connection, being able to trust them with their asset and the chance to back them financially to take on the 500-cow lease opportunity all came together at the right time.

He urged other farm owners to look around and identify the young go ahead people to partner with and create a win:win.

“My advice to young people is make every post a winner and realise that even when you think you can’t see anyone, people are watching what you do.”