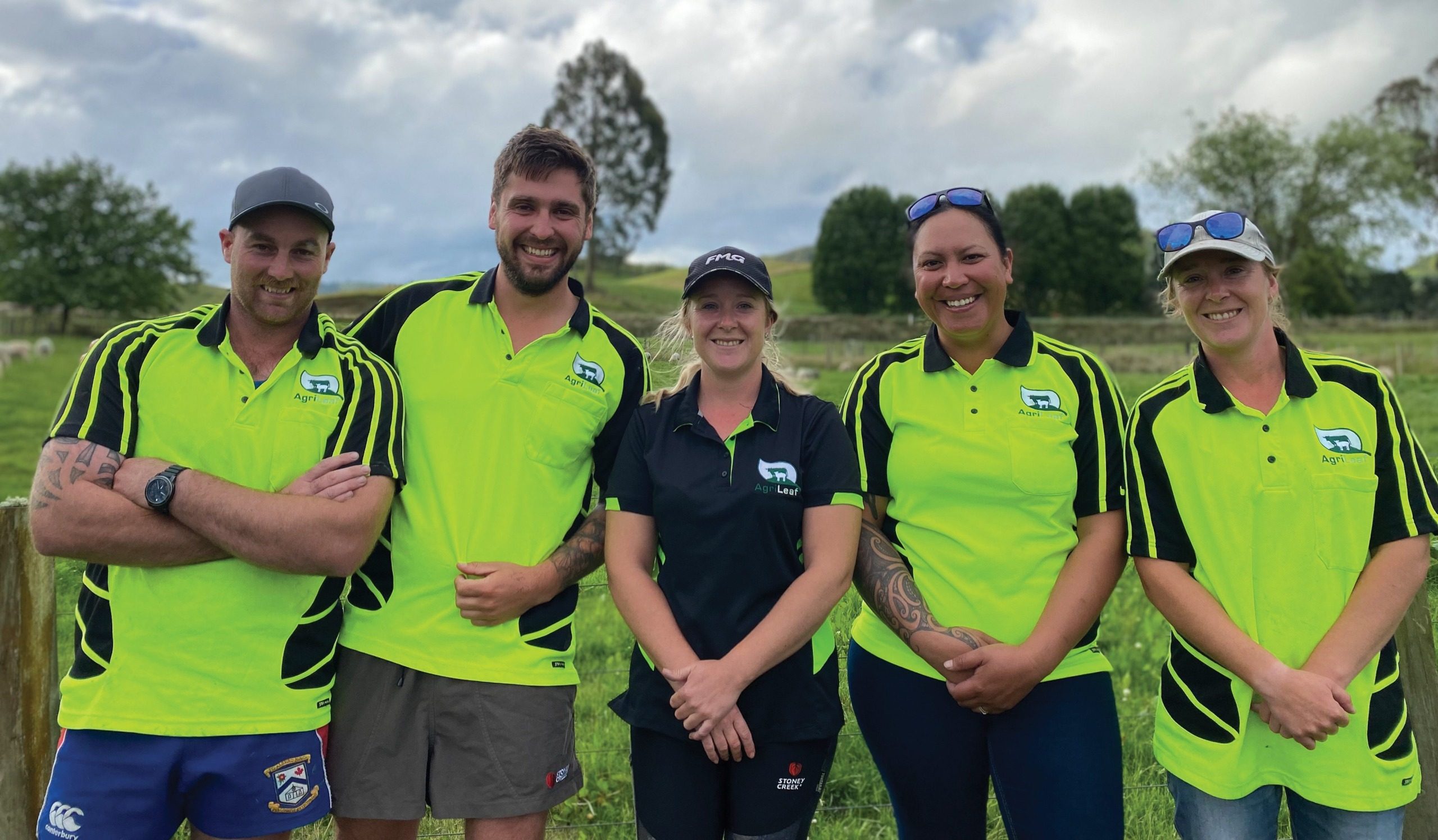 Five rural professionals aim to fill a gap in the farming industry through their company AgriLeaf Ltd, providing skilled relief staff for all aspects of farming. By Alex Lond.

A back-of-the-envelope idea resulted in the beginning of a successful company for five ambitious farm workers in South Waikato.

After the first Covid-129 lockdown in 2020 saw the end of many casual farm workers’ jobs, they realised that as a relief or contract worker operating alone in the farming industry you were vulnerable to situations out of your control. And so AgriLeaf Ltd was born, with a diverse range of skills behind them aiming to combat the lack of experienced casual farm workers in the industry while creating a supportive team environment for others.

In the year since the company began, the team have already provided a range of relief work including fencing, yard work, lamb rearing, lifestyle block assistance, consultancy, short and long-term management roles and are now looking to expand into milking.

“We all lost our jobs during the first lockdown, because the law classed us as non-essential despite all our farms desperately needing seasonal workers. It was too risky for them to employ us and that was the case everywhere, none of us could find work,” Lachlan Paine says.

After five years working for Ravensdown, Lachlan decided it was time for change. After a stint overseas with his now fiancé and fellow AgriLeaf shareholder Lucy Aston, they both returned and started casual work after years in full time roles.

Lucy’s post-university experience involved a lot of practical farming roles, and after experiencing lambing in England and Scotland, they both saw the opportunities contract lambing roles in New Zealand presented. Sheep milking was becoming more popular but finding workers who knew both dairy farming and how to work with sheep was proving difficult.

Diane Karaitiana-Bryant started working for Taupo-based sheep milking farm Spring Sheep Milk (SSMC) as a casual before they converted in 2015. Growing up with her dad as a shepherd and her mum a wool handler, working with sheep was very much in the blood. Before SSMC she worked on multiple farms all over the country and often crossed paths with Lucy and her twin sister Hannah.

Through conversations at work, they started to see how casual and seasonal labour was in high demand everywhere they went, and after Lucy and Lachlan joined Diane on Spring Sheep to help with lambing, an idea started to grow.

“We were all working independently developing our own skills so that we could complete most farm tasks, but by working together we realised we had a combined knowledge of over 50 years with a range of experiences and backgrounds,” Hannah says.

An Ag Sci graduate, Hannah Aston took on a couple of rep roles post-university but after two years she decided that she wanted to gain practical experience. After a stint working for Lucy on a dry stock farm in Taupo, Hannah decided to train as an artificial insemination technician (AB tech). Finding her calling, Hannah says she thoroughly enjoys the precise, organised work that she completes as a tech while the seasonal style allowed her to continue working in other areas for the rest of the year. Along with her partner Josh Oden, they make up the final two components of the AgriLeaf team, determined to make a difference in the farming industry.

“I employed Lucy previously as a casual when I was stock manager on another station,” Josh explains. “I spoke to her then about the shearing opportunities on lifestyle blocks, something she agreed was missing skilled workers.

“We were all doing similar roles just separately, and now with a whole team behind us we are a lot more determined to succeed, make a name for ourselves and our company.”

The team were unanimous in their decision that creating the company would be the best way for them all to continue to provide the best services to farmers. Although there was an obvious need in the industry for skilled casual workers, they were still nervous about how the first year would go after creating the company in June 2020.

“It would’ve been difficult starting up if we hadn’t been unemployed during lockdown, and the opportunity of the lambing contract at Spring Sheep. Dianne and Lucy had already learned the system, completing a couple of lambing seasons before AgriLeaf took over, so we had the experience and then the man-power to tackle the task while learning along the way,” Lachlan says.

The lambing season runs from July – October, and it was all-hands-on-deck for the first season as a company.

The season was an enormous success, and they secured the same contract for 2020/2021. Before the season began, they were approached about a lambing contract on another local sheep milking farm, Waikino Station in the Western Bays, where Josh was already farm manager of the dry stock operation. While this meant splitting the team at short notice, AgriLeaf employed more workers to help them over the two units and completed two extremely successful lambing seasons, applying the skills learned from the previous years and training their new employees successfully into the role of lamb rearers.

“While none of us had a background in it, milking sheep are very much at the core of the company and all of our employees now have some experience,” Lucy says.

“While we are definitely not experts, we can apply our dry stock backgrounds and limited dairy background into the role, and it helps that we all thoroughly enjoy the challenge the work provides.”

When they are not feeding lambs, Hannah and Lucy still have AB runs from October – December, while Diane spends her time doing casual shepherding with a team of dogs, fencing and yard work. Josh continues to manage Waikino Station’s dry stock through the company, while Lachlan continues his consultancy with AgFirst year-round, a job he has been doing since AgriLeaf started up.

While everyone agrees the company’s main aim is to provide essential labour, they don’t deny how rewarding the job is for them as well. The diversity and variety of work has allowed them more independence, as well as control over what they do and the high standards they set for all their jobs. As well as excelling in their own abilities, they say working in a team rather than alone has allowed them to expand their own skill sets and those of others. It also solves the problem of isolation and loneliness farmers face because even when they are working alone, they know they have a team  behind them.

“There really isn’t anything more rewarding than helping other people out. No matter how big or small the job, be it shearing ten sheep for a small lifestyle block or drenching and dipping 3000 lambs on a big station; we find every job as rewarding as the last knowing that we have completed it to a high standard by providing the best people for the job.”

Plans for the AgriLeaf team involve encouraging younger people into farming roles. While they are currently only employing staff who already have the required skills for the job, they hope one day they will be able to bring staff on and teach them the skills themselves.

Both Diane and Lucy completed cadetships around Taupo, and Josh completed his training at Smedley Station cadet training programme. All agree this time was an invaluable source of learning for them that is not as readily available to the younger generation anymore.

“It got me into a routine and taught me how hard work helps achieve personal goals. I learned skills that I still use today such as teamwork, communication and working hard until the job is done.” Diane explains.

Lachlan and Diane are working through AgriLeaf with Māori trust farms in the South Waikato, towards a programme that would create a relationship between multiple farms in the area and create a distinctive style of cadet programme.

The programme would allow young people to gain a variety of skills working on multiple farms, and then seek employment on any of the farms once they completed their apprenticeship. The major focus would be on building multiple skills and allowing the younger generation to see what a variety farming can bring to the table.

“We’re not talking about just university students filling their quota on the holidays,” Lachlan says. “Having a degree isn’t everything, if you’re keen to learn and prepared to work hard then that’s just as valuable, and with the correct support and training progression is possible for anyone in this industry.”