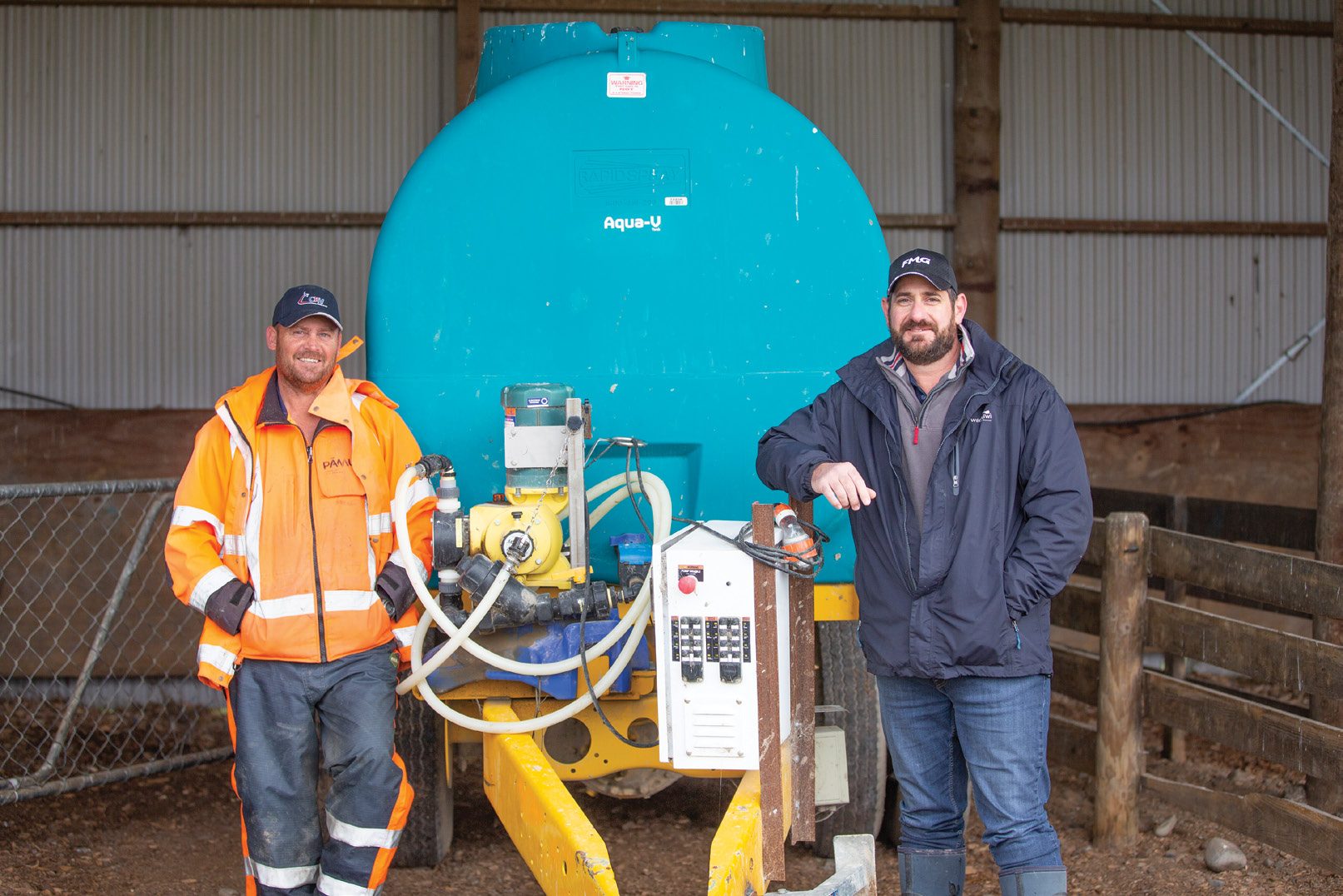 Fertigation - applying fertiliser through irrigation - has allowed Pamu Farms to make significant cuts to nitrogen use on a Canterbury farm. Anne Lee reports.

Applying nitrogen through fertigation has allowed Pāmu Farms to slash its nitrogen use without limiting milk production and studies are underway to understand how the application system could be affecting feed quantity, quality and potential nitrate losses.

Pāmu Farms has been using fertigation – applying fertiliser though irrigation – on its Waimakariri Farm in Canterbury since the 2018-19 season.

It saw a 42% cut in nitrogen use on historic levels in the first year and 25% in the second giving an average 36% reduction on typical use so far.

Irrigation New Zealand technical manager Steve Breneger designed the system installed on the farm and is the technical lead in a wider project that includes Pamu’s onfarm experience in tandem with a scientific study at Lincoln University into the effects of fertigation on pastoral management and environmental loss. Ballance Agri-Nutrients, Lincoln University, Irrigation New Zealand, Fertigation Systems, Molloy Agriculture and the Sustainable Farming Fund are all supporting the project.

“The headline numbers we’ve seen in terms of nitrogen reduction at Pāmu are very positive but we can’t go out and say, based on one farm’s experience over two seasons that all farms are going to achieve the same outcomes,” Steve says.

“Fertigation has been used for decades overseas and in horticulture here but there’s really no research on pastoral farming.

“That’s why this study is important – having the science going on along with the practical implementation.

“The science is informing what Pāmu is doing but at the same time the questions they have get fed back for the science to answer.

“It’s important that we keep looking for those answers. We’ve got big reduction targets to meet here in Canterbury especially and the 190kg (nitrogen/ hectare) limit we’ve just seen imposed makes this even more timely.”

Fertigation has been attempted in Canterbury before but Breneger says the key to setting up a successful system comes at the front end with design.

“You have to be very clear about what you’re trying to achieve, what risks or problems you’re aiming to solve and the level of hands on management you want.”

“In Pāmu’s case they were looking for a 20% reduction in nitrogen application over five years and they wanted it to be able to pay for itself over that period.

“If it was successful, they wanted to be able to replicate it easily.”

“It’s pre-mixed using a hot water process that means the urea is dissolved into the hot water solution to give a 20% dilution – so for every 1000l there’s 200 units of nitrogen.

“Using that process the urea stays in solution and doesn’t recrystallise.

“I think that’s where some past attempts at fertigation ran into problems – farmers don’t generally want to be chemical engineers and doing the mixing onfarm just creates too much complexity and risk.”

The tank sits on a concrete base surrounded by a concrete bund creating enough capacity to hold the entire contents of the 25,000l tank as a fail-safe measure.

The solution is pumped via a four-stroke pump fitted with Viton seals to protect against corrosion to a 4200l purpose-built tank on a trailer unit so it can be transported to the four pivot irrigators that water the 400ha property.

The control unit and pump on the trailer are a specialist fertigation setup from US company Agri-Inject.

Johan Joubert is the farm manager at Waimakariri and says the system is simple to use and works with the pivot’s features so it has fail-safe devices such as automatic cut off if pressure drops, the pump stops working or electricity at the pivot stops working.

The control unit can be controlled from his phone and can send alert messages to him if something goes wrong.

At the pivot the pump is connected into the injector unit on the pivot, which has a non-return valve system.

He says fertigation is carried out separately to irrigation runs with a simple calculation used to determine the flow rate needed to achieve 5unitsN/ha/week application rate.

The farm uses soil moisture monitoring and, just like irrigation management, fertigation is only carried out when the soil moisture levels allow so that drainage doesn’t occur.

“That’s where fertigation reduces potential risk of nitrate leaching because you’re not putting on a month’s worth of nitrogen in one dressing and then having a heavy rain event a week later that washes it down through the soil profile,” Steve says.

Even in the worst case scenario where a heavy rainfall event occurred after fertigation you’d just lose 5kg N/ha not 30- 50kg N/ha, he says.

Equally during hot, dry weather, fertigation limits the amount of loss to the atmosphere through volatilisation.

“If we’ve had rain and the soil moisture levels are getting up there we can delay fertigation and because we’re putting it on with the pivot at such low rates we can get round in a day and catch up the following week.

“So we shouldn’t be limiting the amount of nitrogen needed for the plant if we can’t put it on one week,” Johan says.

A wet spring and early summer period in 2018 meant fewer opportunities for fertigation in the first half of the season and was part of the reason for the dramatic reduction in nitrogen applied at 115kgN/ ha for that season.

In the following season the total application was 150kg N/ha.

Johan doesn’t believe production is being hurt by the reduced nutrient applications or timings of fertigation having to be carried out based on soil moisture levels.

Supplementary feed levels and stocking rate have remained fairly static and milk production has also been on par.

Johan doesn’t find having to time fertigation based on soil moisture levels creates any extra work or problems with complexity.

“You probably have less to think about really because it has become part of the routine.

“It takes about 2.5 man hours a week to move the trailer and set it up.”

Johan says staff can fill and move the tank and trailer but setting up the fertigation round is only carried out by himself and his 2IC.

There’s no withholding time or issue with scheduling fertigation around cow grazing. We also don’t have as many vehicles coming on farm spreading fertiliser which is a benefit to health and safety, Johan says.

A benefit has been the reduction in vehicles on farm with no contractor coming in to spread nitrogen on specific paddocks.

Lincoln University masters degree student Tommy Ley is nearing the completion of his study into the effects of fertigation on pasture yield, pasture quality parameters and nitrogen losses.

The study has compared ryegrass – white clover pasture plots that have been either treated with solid urea fertiliser or dissolved urea in solution to simulate fertigation.

He’s carried out two experiments over an eight month irrigation period since September 2019.

The first experiment was a direct comparison between the two forms of application of nitrogen fertiliser.

A third treatment was carried out using solid urea at 25kg N/ha/month but irrigation was delayed until two days after each month’s application.

In the second experiment Tommy has looked at the effects of scheduling more frequent lower rates on nitrogen fertigation on pasture measures.

The results will help understand if fertigation can help plant nitrogen use efficiency with theories suggesting the frequent, low rates of nitrogen applied in liquid onto the soil help maintain a steady pool of the nutrient sufficient for plant growth with minimal losses beyond the root zone.

We will bring you Tommy’s results in coming months.